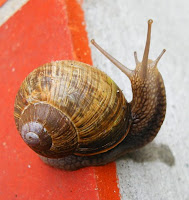 Last week we received large amounts of rain. It has been raining almost non-stop for days. Particularly last Saturday was unusual in the fact that it was very wet, but also very warm. The rain felt almost tropical, which I do not recognize this far up north.

I am not sure if it is only in my mind, but nature is changing. The climate today is not that which I recall from my childhood. We experience a much more severe weather when it comes to rain and wind and temperatures as well. On many occasions, there are also articles in the newspapers about sightings of species of animals that are not common at these latitudes. Insects that usually live in warm climate are often seen here. Just the other day I read about a cicada sighting, an insect that is absolutely not native to Scandinavia.

I myself made a little unusual discovery on that particular wet Saturday. The rain brought out snails; we always have large amount of these. Mostly slugs, the black and even the red "killer" slugs that consume everything in their way and are a nuisance to every gardener. 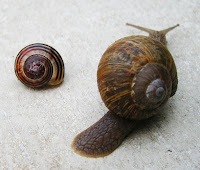 On my terrace I could see an unusually large snail (of the edible kind, I believe;), one that I have never seen there before. As seen on the picture for comparison, our Scandinavian snails are much smaller. The large one is very common in central Europe, but I have never seen it here before.

Even though snails are savages when it comes to flower beds and vegetables gardens, I still like them. I like to watch them and their slow-motion moves, and at times their relentlessness on getting where they are going and not giving up until they reach the destination. No matter how long it takes.
Their perseverance and a way of "taking it slow" are so contagious. At least I think so.

I agree, snails are interesting. And fun to draw. Slugs on the other hand are disgusting. I remember as a child I went barefoot everywhere. You had to be careful outside at night or else you might step on a slug. UGGGG, whenever I stepped on one there would be a big slime spot on the bottom of my foot that was hard to remove. I hated that!

We DO have slugs (I agree w/Stevie...YUK!) but I cannot say that I have ever seen a snail up close and personal...the two in your picture are quite diverse. They have the most interesting head or neck or face?? I do not know what to call the spiky part of their head but it is quite interesting! You got a very good shot of your visitor.

I do HOPE that you get to see some sunshine very soon!

Okay..only you could make snails(and slugs...my big fear in life, besides tall places)a little more appealing to me. :-)
I am going to try to remember to "take it slow" today.

An edible snail? No thanks. You weren't kidding when you said you're having lots of rain! Get out the buckets, get out the pails, at least you have the entertainment of snails.

That's a wonderful video, Z. The detail is perfect! We're finding snails everywhere now too. Our weather is the same as yours this season. When we take Benny out on a walk, he wants to bite every single snail (it's the smaller kind) he sees on the path. We have to beat him to it, pick it up and fake him out by pretending to throw it. He runs in the direction he thinks it should land while we gently place it elsewhere out of his sight. Crazy dog! You'd probably love him. ;)

Cute! I remember finding one in our backyard when I was young. I think they are fascinating. Funny that we think slugs are disgusting, but put a shell on their backs and they are wonderful! ha-ha! We had lots of rain last week, too!

When it was raining a month or so ago, we had plenty of snails around, some really huge. A pain indeed for flowers and plants, as you mentioned, so in a way I'm relieved we've been having summery weather lately. Remember our "canícula"? It was supposed to end last Thursday, but it's still going on, for almost 2 weeks now. I'm happy with the sunny, clear days, but at some point this lack of rain will hurt nature, agriculture especially, so in a way, I'm hoping for rain again, even if it brings out more snails.

Thanks, dear. I think, in a way, it was my idea of playing nostalgic to what banana republic used to be- Safari Chic and I miss that.

In my family, we consider snails good luck. ;)

I recently stepped on a slug with bare feet. Wait. The slug didn't have bare feet... I did ;). It was DISGUSTING. Little in nature wigs me out... spiders? Pfffttt. Snakes? No big deal. Slugs squished between my toes? Aaaaagggggghhhhhhhh!!!!!!!

Their tenacity do inspire at times .... setting everything into slow motion maybe another side effect!!

Denmark is having very similar weather to ours, in Canada (at least our part). I'm not a fan of slugs - will chuck them into the road if I find them, but I do like snails. Yours look just like ours too.

Thank you everyone for your lovely comments and for taking the time to stop by.:)
xoxo

Z, I have certainly noticed the same thing about weather changes between now and when I was a child. I lived away from my hometown for 25 years, but have now lived here again for several years, and it's not the same. Our winters are much milder.

Thankfully, we do not have slugs. I've never liked those little dudes.

=sallymandy,
yes, it is strange with the weather changes. I too dislike slugs I must say, there is nothing beautiful about them and they destroy everything. I like snails though.;))