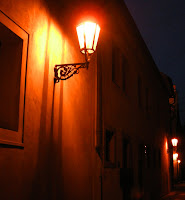 My final post about our Prague adventure (at least this time around), describes the magic of the city after the onset of darkness. A veil of endless, sentimental romance settles over the streets, exuberating the feel of old photographs or paintings from times long gone.
The best pictures that I took on this trip were made during the hours of dusk and twilight. Nevertheless, they can not match the beauty of the reality, which can only be appreciated fully by being there.

The winding streets leading up to the castle became silent and deserted as soon as darkness covered the city. We lived in a small, romantic hotel just under the castle and had every opportunity to visit it after dark. It was accessible and held open. Walking around the empty castle yard and gazing at the buildings and the majestic cathedral with its gargoyls and ornate stone structures was an amazing, unusual and almost surreal experience, particularly due to the fact that just a few hours prior, it was filled with hundreds of tourists.

Of course, a city like Prague with all its legends and tales, holds a few stories of the supernatural nature. Book after book has been written on this subject and the city offers a multitude of ghost tours.
We joined one of the tours and were led through the streets of the old town, listening to forgotten tales of the old city, feeling the hair on the back of our neck rise. No matter how logical ones mind is, the atmosphere of the empty streets mixed with the dark tales will make a believer out of the worst of sceptics. 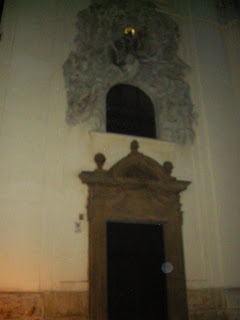 A picture worth posting and a detail worth mentioning is the one that we were encouraged to take standing in front of the St. James Basilica. Not only does the church have a mummified forearm hanging at its entrance, but the monastery connected to it also apparently played a major role in the killing of the Knights Templar in the 14th century.
On the pictures of the entrance here, one large "energy orb" can be seen to the right of the entrance, almost at middle of the gate. Although some will claim that these orbs are of no supernatural origin and can clearly be explained scientifically, I choose to believe in magic and will proudly display my one and only meeting with the unknown. 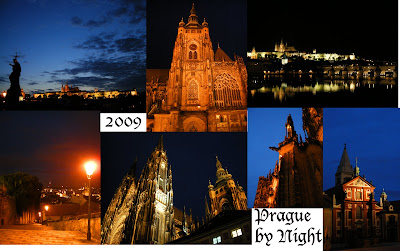 These castle photos are beautiful and eerie. Very cool that you captured that orb.

You should write travel brochures! You have intrigued me to look into returning to Prague, as I was only there for two days on my trip. Not nearly long enough!
So glad you enjoyed your trip! Thank you so much for sharing!!
Have a great weekend!

I am so happy to have catch up with your posts. As I'm back in Kuching and feeling a little fatigue from the long journey from Bintulu. I love the idea of the ghosts tour! and the pins as reminder of the flip of history that best be left behind but never forgotten. Do have a nice weekend.

Ah! I read this with the lights off and just as I was finishing, it started raining.

I cant imagine how wonderful it must be to walk empty castle grounds at night. Must be a lovely feeling being surrounded by all that quiet energy.. should be a really good place to write or think too! hehe..

I actually kind of believe in ghosts as I have had a few personal encounters which I would very much like to forget.. except for one. hehehe..

Mmmmm, ghost tours are always fun! I've been on three. The best one was the Jack the Ripper tour in London. Fun!

There is something special about an old town and beautiful buildings at night. The collage of pictures is lovely.

These pictures are just beautiful! I would love to go on a ghost tour!

Enjoy the Holiday weekend. May you have a fabulous time, love! :)

This post thrilled me!! I have had to very similar experiences. One was walking around Edinburg Scotland at dusk with some dear friends and spending a long time in the courtyard at the castle just studying all of the rustic door ways and window openings. It is hard to believe that there were people who lived that way of life,...and to them it was normalcy.

The second was taking a guided walking tour of Bath and exploring the Roman baths while listening to detailed true stories of the lives of those who used them.

I really feel the need for a vacation coming on!! :) Thank you for this post! I love the way you use words!!!

=Hilary,
thank you. I keep thinking that you would love the city for the multitude of photo opportunities.;)
I hope you are having a wonderful weekend dear friend.;) xo

=Julie,
such a kind comment; thank you so much. I am glad you enjoyed this post. I hope you will have a possibility to return to Prague soon.;)) Likewise I am wishing you a lovely 4th of July weekend.;))

=Mahmud,
I am always intrigued on how you divide your life between Bintulu and Kutching and how the cats travel wit you. I am flattered that even though you are tired from your trip, you still take the time to catch up on my writing. Thank you dear friend, hope your Saturday is wonderful!;))

=Valentine,
thank you so much for those wonderful words; I would sure like to hear more about your personal encounters with the supernatural. I am very interested in things like that.
I am hoping your weekend is lovely.;))xo

=stevie,
this was my first ghost tour, but definitely not the last.;) It is fun to get to know the city in this way. I agree about the buildings at night, glad you enjoyed my collage.;)) Have a wonderful 4th of July weekend.;)
xo

=Erika,
I hope your 4th of July is lovely, as well as the rest of the weekend;))
xo

=Holly,
I am so impressed with all your travels, I have never been to Scotland and I always wanted to visit Edinburgh.;)) i have heard it is beautiful.;) No to mention Bath with its old Roman spas.;))
You must have so many wonderful memories from there.
I hope your 4th of July weekend is lovely; always enjoy when you stop by.;))

I've seen those orbs on my photos before - i always thought my lens was dirty. LOL

I adore the idea of a ghost tour. I'm fanciful like that in case you hadn't noticed. LOL