On one of our last days in Prague we made a visit to a more somber of Prague sights, the Ss. Cyril and Methodius Cathedral. It is a beautiful Orthodox Church in Prague, position on a street leading to the Moldau river. Visiting it made such a strong impression on me that I decided to share it with all of you, despite the graveness of the issue.

I recall passing the cathedral on numerous occasions as a child, in the company of my grandparents. What stuck in my memory was when they pointed out the side of the church facing the street and brought my attention to the numerous holes in its facade (clearly created by gun shots), as they at the same time mentioned the World War II. I was never offered any more information, nor was I looking for any explanation. The memories of WW2, at that time merely 30 years old were always around me. But to me that was a distant past and my mind, although intrigued, only accepted what I saw without further interest.
This was about 35 years ago and that was the last time I passed the church until a couple of weeks ago, on the 19th of June. 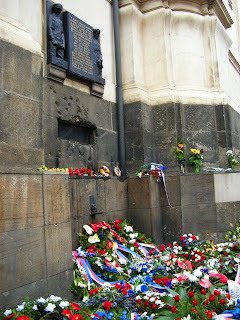 The side facade, as seen here, was covered with beautiful wreaths and fresh flowers, to commemorate a somewhat sad anniversary of the previous day.
This was the sight of a terrible tragedy in the year of 1942.

The events unfolded already on the 27th of May the same year in other parts of Prague, with the assassination of Reinhard Heydrich, the Deputy Protector of Bohemia and Moravia during the Nazi occupation of Czechoslovakia. The operation was carried out by young Czech men, trained by the British, who parachuted in secrecy into the capital. Following the successful assassination they hid for weeks in the Cathedral (Heydrich was mortally wounded and died in the hospital a few days later).
Eventually, the brave men were discovered on 18th of June and in a bloody battle that lasted for two hours, one soldier was wounded and died shortly after arrival at the hospital. The other parachutists committed suicide to avoid capture after an additional four hour battle with the SS. 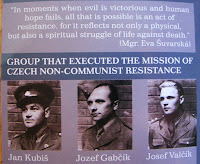 Signs of this battle can still be seen on the church facade, but also foremost eerily sensed upon the visit to the church crypt, where the doomed soldiers were hiding. This was one of the most stirring places I have ever visited in my life. The air was filled with sadness and a feeling of despair, clearly palpable at all times.

The consequences of the assassination were severe and too cruel for words. Entire villages were wiped out, leveled with the ground and innocent people, among them the priest and chaplain of the church (and their families) were executed.

Our visit to this church stirred a plethora of feelings in me. It did not make me despise or blame anyone, nor single out anyone or any place. I think it mostly brought the terror of war closer to home. Places such as these serve as a reminder that peace should never be taken for granted. It also reinforces the fact, that terrible evil will always exist, but so will the incredible good and that true heroes are ordinary people we might rarely hear about.

I have a knot in my stomach just reading your post...the terror, the sadness of war. Yet, your visit and the visits of MANY others keep the memory alive which is so important to the history of this country.
Thank you for sharing this.

WOW...if I ever make it to Prague (which I REALLY want to visit), I will definitely go here. I LOVE learning about WW2 history, which is why I think Berlin is one of my favorite cities in Germany. Walking along the wall, and visiting the all the SS offices really brought it all to life.

Thanks for sharing such an interesting place.

This made me cry. The things men do to one another. Awful.

Europe is full of memories and impromptu memorials like this. I too am drawn to them, and sometimes feel the emotions all over again, as if I were there in that time. Thank you for this poignant story, Protege. I hope we never forget, that we don't need another war to remind us how to be good to each other.

Protege, thank you for a wonderful read. I have just caught up with my blog reading and just read your last 4 or 5 posts. Thanks for the train ride, your "personal" look at history and some great photos. Those house signs were beautiful!

Although My family Come From Poland I have to say that Prague (along with Budapest) is my favourite City in Eastern Europe.

Thank you for sharing the story, though grim; we need to remember so we don't repeat the evil things. It is so melancholy to be in a place that exudes its history, where you can feel the layers of the past in the air. Sometimes it feels that if you could see through the veil, it would all unfold before your eyes.

I love your last senteces...you wrote such true things. The absolut truth. We should remember these things and respect and celebrate freedom.

Have a lovely week dear Zuzana, much love: Evi

WOW!! That story really was amazing. It gave me chills and put a lump in my throat. It must be one of those places where you feel a certain reverance just being there.

I really appreciate how you summed up this post about heroes being ordinary people. So true!!

=Jill,
I am touched by your kind response and I agree with everything you say; although a grave issue, it has to be remembered. Thank you so much for this kind comment.
xo

=Jacki,
I agree completely; being at the places where certain events have unfolded makes the history come to life and it touches our very core.
I hope you will manage to visit Prague, you will enjoy it for sure.
xo

=Diane,
sorry about the tears, and about the fact that so many post this week have made you sad.
But I know the sentiment you feel; the atrocities people inflict on each other are sometimes impossible to comprehend.
I hope you are having a great Friday dear friend.
xo

=Keera,
thank you for the touching words; as I recall, you have a very tight connection to that time in our past and I am sure it brings back some grave memories.
I agree completely with your every word.
xo

=swenglishexpat,
it warms my heart to hear you enjoyed the recollections of my trip. I decided to combine pictures and present more a tour of a personal nature, instead of just listing the well known sights.
I am glad you like the house signs, I too find them intriguing.;)

=Tony,
I have many Polish friends and many Polish cities have great cultural and historical heritage.
Thank you so much for stopping by and for your kind words.

=Rosezilla,
you have a way with words, your comment reads like poetry. I feel what you mean and agree completely. It is exactly what it feels like to walk in those places.
Loved your last post, very well written. You have a true talent.;)
xo

=Evi,
thank you for your sincere and kind words. I know you can relate to much of what I have recollected here as you too come from a part of the world that is close to mine in history.
I hope likewise your weekend is wonderful.
xo

=Holly,
I always appreciate your comments as they sum up so eloquently my sentiments.
Always glad when you stop by my dear friend, hope your Friday is lovely.;))
xo

This is such a powerful post, Z. I could feel the terror and ugliness. And the great relief to live in a peaceful country and time. You wrote this so well.

=Hilary,
thank you so much dear friend. It effected me greatly and even if the events very so sad, I felt it was important to share.
Always love when you stop by, hope your weekend is wonderful.;))