Tranquility By The Sea. 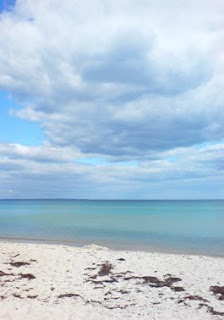 I was born under the Tatra Mountains in the heart of Europe. Therefore, during my childhood, the sight of a large body of water was an unusual one.

The word "sea" brought at all times exotic pictures of far away lands to my mind. We did travel to the Mediterranean when I was small, or rather to the Adriatic Sea. The most intense moment of all, on those trips, was when we drove around the final bend and could feast our eyes on the endless alloy of sapphire blue and emerald green waters of the warm, tropical sea, lined only by the misty horizon.

Upon our immigration to Sweden, the sight of the ocean became a common one. We lived in a port city on the west shores of the Baltic Sea. This ocean has very little resemblance with the calm waters of the Mediterranean; at times azure blue, it is pristine, but wild and free. Predominantly the colour of steel, it invokes respect and awe. We lived in close proximity of a strait and I could hear fog horns late in the night, when I sat hunched over school books, or early in the morning, when the whole city lay still.

When I lived inland in North Carolina, I missed the sea. After a decade of seeing it almost every day, I found the endless land oppressive and I longed for the carefree feeling, which gazing at the open waters will offer at all times.

I love everything about the ocean; I love the fact that it is different every single day. Its colours and moods change with the seasons and even with the weather. The clarity of the air above and around it varies as well, offering almost a mirage-like sight of rocky islands and freighter ships, which seem to be almost within a reach on a clear day, just to become invisible when enveloped by heavy mist or fog on the next.
Still, even now, I take the longer drive to work, only to be able to see the ocean every day.

This past Sunday, I took a walk on a nearby beach with my parents. I do visit this particular spot frequently, mostly during the summer months. However, I have rarely seen the ocean of the colour captured on the pictures and the movie clip below. The clouds in the sky gave the sea an almost tropical feel. The beach was deserted and tranquil, as if secluded in a lonely bay, on a forgotten island in the tropics. The lack of easterly winds made the waters lay still, with an occasional wave hitting the shore, creating a harmony in sound and sight.

It was one of these rare, memorable experiences - all I wanted was for that moment in time to last forever. 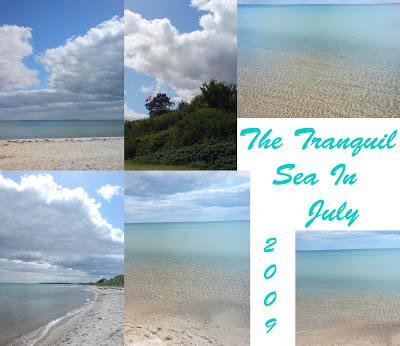 Thank you for such a peaceful, thoughtful post. There is something about the sea that brings out the poet in the soul. Here in Suffolk and Norfolk we have the North Sea in all its briny wildness. Both Benjamin Britten and E M Forster lived and worked in Aldeburgh producing evocative works such as Peter Grimes and Billy Budd.
Your photos conjure up images of a deserted island - until you realise they are in fact in Scandinavia. Very lovely.
x

A nice calming post. I can see why you'd crave living by the sea. The best we have within driving distance is Lake Ontario and hundreds of smaller inland lakes, rivers, creeks and ponds. They serve their purpose. It appears as though you have shallow water for a long way out.. and it's so clear!

I love those magically perfect days when nature is at it's most glorious. The color of the water is beautiful.

Very calm.. very serene.. very quiet... A perfect place to sit alone and reflect on life and the nature.

Nature at its best!

You are so fortunate to be able to see the ocean every day. I love that calming feeling it has...there just isn't anything like it!

Everyone seems to be in a "beachy" mood.. makes me very, very excited for my upcoming trip. I love how you described the ocean's ever changing moods and its waters really are never the same.. :-)

I loved that video too, the beautiful colour of the sea and the sounds of the waves just so relaxing. It's obviously a very special place for you and somewhere to go and relax. Go raibh maith agat ("thank you" in Irish) for sharing with us!

You are so lucky to live close to the ocean! I have to drive 90+ kms. to get to the closer one, yet I would do it every week if I could. I love the ocean as well, and the tranquility of a beach. When I get to go to the beach, I adore to sit in the sand - something not many like - and just stare at the vast mass of water and admire not only its beauty, but also its power and mystery. Thank you for sharing!

i love the beach. makes me so calm and relax. Here in our country we're surrounded by beaches and numbers of rivers and lakes. So i love it here.

You know how I feel about the sea. The same way you do! And though calm blue seas are beautiful, I do love the wild, grey water... maybe a nod to my birthplace on the North Sea? xo

The only time I lived by the sea, I was too young to remember it. My parents say that sometimes, when my father was at work, my mother would walk me down to the beach.

I also LOVE that first glimpse of the sea as you round the bend; it was magical!

WOW!!! I have missed some amazing posts. (Haven't been spending much time on-line trying to run errands and get my family ready to go on holiday.) Your posts have been just wonderful. Every one of them unique. You are such an interesting and versatile person!! I really enjoyed the peacefulness of this one.

Simply beautiful writing, Zuzana!
I love living by the sea--the ever changing waters and colors of the sea and sky above it...and know, too, that I would miss it terribly if I ever moved further inland.

Very beautiful writing... we could walk the shore together and have much to talk about. I share your love for watching the ocean. (Usually the Gulf of Mexico for me)

Jeanne, Hilary, Stevie, Kcalpesh (welcome!), Sumandebray, Philip, Betsy, Valentine, Blogair, Claudia, Denise, Diane, Tim, Hazel, Holly, Jowy (welcome!), Tina and Beverly - thank you all so kindly and from the bottom of my heart for all your lovely comments. The lack of time due to my visitors prevent me to respond to all of you personally, as I would prefer.;))

I am so happy you all enjoyed these beautiful images of Scandinavia, when it is at its best and that so many of you share my passion for the sea.:)

this was so beautifully written! And about one of my favorite subjects, too. My hubby and I have been going to the beach about once a week, at sunset, and I am enjoying it immensely!

=Rosezilla,
thank you so much for your kind words.;)
xo

That's beautiful. I'm glad you got to enjoy it with your parents. I'm sure I would also become very attached to living near the ocean if I ever did. I grew up with mountains, and in the years I lived in flat places I was very uncomfortable without mountains. It's interesting how geography affects us in those ways.

=sallymandy,
yes, we all tend to love what we grow up with and we miss it when it is not around.
Thank you so much for your always kind words.;)
xo