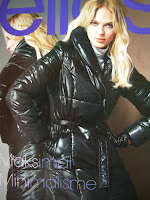 I am with a strong reluctance realizing that we have reached the summers peak. The second summer month is half way gone and even though I have not even considered giving autumn a thought, it is not possible to avoid with all the fashion catalogues that keep dropping down into my mailbox.
All my favorite on-line stores are having big summer sales and the autumn fashion is already being presented on their front pages.

It was not long time ago at all that I was sitting and looking through all the summer fashion in January; but somehow that felt so much more exciting.
I can not believe that anyone out there seriously thinks about autumn attire yet! Often I do not touch the magazines until at least September, but this weekend I decided to actually look through them, despite the overwhelming feeling of denial. (Did you know that denial is a Freudian term?)

I liked what I saw and much of it actually pleased me. However, in contrast to January, when I spend a whole weekend ordering summer clothes as soon as the magazines arrived while I dreamed of summer, this time the new catalogues were thrown under a pile of summer fashion reading, to be forgotten at least until the end of August. 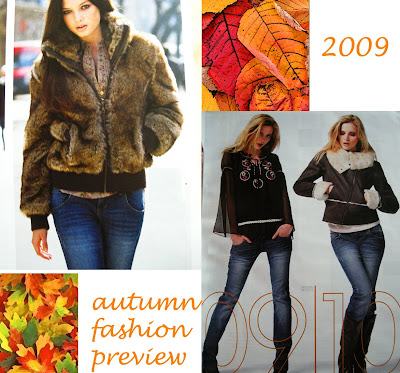 I do like the change of seasons and spring is my favourite, closely followed by autumn - I always put off buying winter season clothes until the very last minute though and then I live in my boots until the following May!!

OH....I am RESISTING this quickly disappearing summer! I try very hard not to think how quickly it is slipping by!

Those short jackets are SMART aren't they?

Have a wonderful day!

hmmm...the things stores do to get ahead in sales. In this time of financial "problems" they'll do whatever they can to get your money before anyone else. I too think it is too early! It's barely July!, though I have to tell you, even though we do not have Autumn on this side of the planet, we've been having October-ish days, so it's all very confusing really.

I am very much looking forward to doing my winter shopping while we are in Denmark! Even though I enjoy summer, my favorite clothes to wear are jeans and sweaters.

i used to really follow fashion.. the changes every season.. but figured that the more i looked at the clothes, the more i wanted them and thus ended up spending way too much. hehe.. i dont buy magazines anymore.. except for photography ones. but even then.. i feel the urge to buy. hehe..

I was just thinking the same thing looking at the calendar this morning...amazed that July is half way done! Not ready for the winter fashions just yet, but those coats sure are cute!

I feel like summer flies by too fast for my little ones. I just get them home and it is already time to turn around and send them back to school. Not to mention how I live in the desert and they are already putting sweaters on the shelves in our stores. Lets just be in denial. You and I Z., it's denial for us! :)

It's been a hot summer, and my A/C broke a month ago and cost me a lot of money to fix, so I kind of wish we'd just skipped over summer this year and went straight to autumn. UGH! And to think we still have a couple more months of 90 degree or more weather ahead of us!

by-the-way, were you joking about not knowing who Michael Phelps is? And, my calendar didn't have the Waldseemuller map in it. Oh well.

=Jeanne,
I simply love summer! I am summer child and I enjoy the heat, the sun and the light. I totally dislike winter, except when it is sunny and with some snow. But, here in Scandinavia we have neither, almost never anyway. I agree with you on the seasons though; I like the variation and the anticipation. Having REAL seasons each year is the best and the older I get the more I enjoy them and need them.;))
xo

=Jill,
I am with you, where did it go right? It is going way to fast, I wish January and February went this quickly. Yes, the jackets are very nice.;))xo

=Claus,
yes, I am still amazed by the fact that the world seems to be ruled by the seasons of the northern hemisphere. June and July and August are summer months and very rarely we hear that they are winter months on the other side of the globe. I recall you wrote once that you do not have winter in the sense as we do, you have the rainy and dry season. Well, I guess seeing from your perspective, the rainy season is half way gone.;))xo

=Jacki,
I know what you mean, the autumn and winter fashion will already be in stores when you are here. I have to say that I like to wear sandals and sleeveless tunics.;)) xo

=Doreen,
I hear you and I agree.;) Autumn, what autumn?
xo

=Valentine,
that is so correct. I too find myself spending way too much.;) The magazines really do not make it any easier.;)) xo

=Betsy,
it is going way to fast, isn't it? Yes, the only consolation that I found upon seeing the magazines was that the fashion was great.;))xo

=Reasons To Be...,
glad to see you you and about, your recent post got me a bit worried.;)
I am enjoying the last bit of sunshine this morning. We are suppose to get hit badly by rain and storm over the weekend, so here it will feel like the end of summer as well. xo

=Holly,
you are, as always, speaking my language! I feel sorry for your kids too, summers should be longer, at least 6 months, right?
Lets be in total denial my dear friend.;)) xo

=Mel,
please, please, send me some of those 90F!;))) And heat and humidity. Pretty please?
Aw, sorry, honestly, I had no idea who Michael was until I googled him. I mean, it rings a bell, but it just shows how little I know about sports. Hehe. Besides, his looks are so ordinary, one can feel to spot him pretty much anywhere.;))
xo

I'm with you! Refusing even to think about autumn yet. Cheers to that.

=sallymandy,
yes, no autumn thoughtst for a few months.;)) Although today the weather is very autumn like, I must say.;))

Not ready for fall just yet! I have really been enjoying this summer. Those clothes are very cute though. And sad to say but I have more fall clothes than I do summer. Not sure why since I live in the desert.

It isn't until the end of August(when it usually turns muggy and oppressive with humidity) that I start to wish for cooler weather and want to cuddle into woolly sweaters, and wrap myself in scarves again.
For now--it still feels like summer here and I am wanting it to last as long as it can....and still buying summer clothes(two new tops Friday--our favorite day, afterall, and usually a little bit of a retail therapy day for me lately)

=Shelly,
I think no one is ready for fall yet, I really have no idea who order/buys autumn clothes already.;))
Perhaps the reason why you have more autumn clothes as you like that fashion better.;))
xo

=Tina,
I am with you, there is nothing like a little shop therapy.;))
Ah, you know, I love heat and humidity, I am weird that way.;))
I hope you are enjoying your week off.;)
xo

LOL...I understand you very well...I don't like to think about autumn at all...