A "Not So Distant" Past.

We already knew from the very first time when we planned our trip to Prague that we wanted to visit one particular place. The Communism museum.

The Irishman found it on the net and the idea immediately stirred my curiosity.

My interest in this "not so distant past" can at times be viewed as strange and even morbid, by others that stayed behind, so to say, and lived it. To them this is a dark part of their lives that they are not too keen on re-visiting. Or feel it is too early to do so.

However, I was a child during the communism era and even though I in no way support the system, it holds bittersweet recollection that defines my childhood to a certain extend. Considering the fact that the so called "Velvet Revolution" in Czech republic will celebrate its 20 years anniversary in November, it is obvious that a new generation has been born that knows nothing of the life that their parents and grandparents lived.

I applaud the couple that founded the museum. It took them years to collect all the items, pictures, memorabilia and information and they created a truly interesting place. It is unique, as this chapter of the history is closed, but should never be forgotten. Some of the items on display will become rare collectors item. 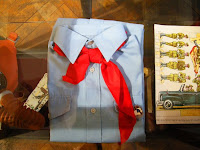 I became particularly intrigued by the pioneer pin, as it brought back a wave of sentimental memories from a time in my youth that I described previously. Although I used to be a pioneer, I no longer own the uniform, the red scarf nor the pioneer pin that was worn on the blue shirt, as seen in the picture taken at the museum.

Gazing at the neatly folded uniform behind the glass, I experienced a strong longing to posses the pin, which connects me to that time in my past. Little did I know that I was soon to become an owner of one. 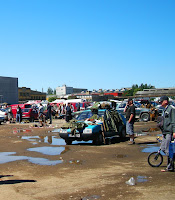 The museum sold multitude of pins and badges, but not this one.
The very next day, we headed out into the outskirts of Prague to visit a large, local flea market. But this was a type of market I have never seen previously nor will I be likely to ever see again. Although visited by a few tourists, it was mostly attended by the locals and anything and everything was for sale. Including brand new doors, refrigerators and car tires. Do not ask me how they were obtained. Located in the suburbs, in a wide factory area, walking through it was an experience of a lifetime. I got to fully practice my haggling skills as well and after a few hours, both me and the Irishman were proud owners of a multitude of pins, including a pioneer one. 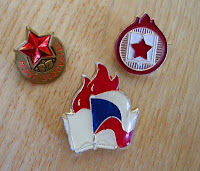 I have placed it together with all my other souvenirs, on a shelf in my study. It will forever be a reminder of the fact that once my future was cloudy and unsure and political freedom was an unknown word in my vocabulary.
Posted by Zuzana at Wednesday, July 01, 2009

What a wonderful story. I'm glad you found the pin!

It is funny what a grip our childhood sometimes holds us in, and the tangible things we need to make sense of it. Others we react to on a deeper level without words, only symbols.

I can understand why you'd want the pin. I'm glad you found it :)

So glad you found the pin! I agree it is important for us to study and remember the past, even if they were not the best of times.

So interesting!!!
This is a history lesson in itself!
I have missed you and am looking forward to all your vacation blogs!

Thanks for a look at Prague off the beaten path. When I visited the Tate Museum in London a few years ago my favorite exhibit was the Communist propaganda posters. The graphic design was beautiful and the message was understandable even to one who had no idea what they said. I thought they were fascinating.

Love the story about the pin. I'm glad you found one.

=Betsy,
thank you for the compliment, it is amazing how we find things in the most unusual places.:))

=Rosezilla,
that is absolutely correct and right on; some things also make sense to us only.;)) Thank you for this wonderful comment.

=Diane,
I knew you would as the past have sentimental hold on you as well in certain aspects. Always glad when you stop by dear friend.;)

=Little Lovables,
that is very true and I agree completely. Thank you so much for stopping by.;))

=stevie,
so interesting you mention the posters. They are a story in them selves, always showing workers with conviction in their face and always looking forward, towards a brighter future, with very political slogans.
I am so happy you enjoyed my recollection of the "pin hunt".;))
Always love your comment.;))

I was so pleased to read you had found the pin! What an important memory for you. I love a flea market and will most likely never have the opportunity to browse in one like the one you and the Irishman enjoyed.

Very cool that you found the pin!

This, too, is going on my "must see" list. I am just always fascinated by European history, especially the time period between WW1 and WW2, and the aftermath.

I had never thought about visiting a flea market, but that is another "to do" on my list. I would probably find a lot of interesting things.

=Jill,
I used to always like flea markets, but the Irishman made me love them, and seek them out on our travels.;))

=Jacki,
yes, the markets are amazing as you can truly find incredible things. I sincerely hope you will make it to Prague in the future.;))

What a wonderful post. I'm so glad you were able to find the pin. I'm sure that it connects you to feelings from a time and place I just can't imagine. Thanks for sharing that. :)

Even if I live in Czech Republic, I´ve been to Prague just few times and I kind a would like to visit the fleamarket :).
As you say, the young generation knows nothing about communism (neither do I,) so our school is planning to do a big project about the "velvet revolution", including the inteviews with people who had something to do with it.
I can´t wait, because I´m really interesting in history and inteviewing people. :)

=Hilary,
I am glad you enjoyed this post that does connects me to my past.;) xo

=Tereza,
what a wonderful comment! I would love to talk to you about your thoughts and views of the communist past, as you have never lived it. How exciting that you will interview those who had experienced it, I am sure you will learn a lot.
Thank you so much for this very refreshing comment, it means the world to me that you stopped by!:))