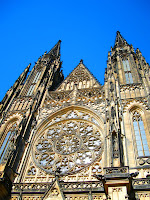 When it comes to architecture, I surely am no expert. If I am asked to describe a type of building that I would truly like, I would most likely bring up the multitude of Gothic styled cathedrals that I have gazed upon and visited over the years. I have an inclination to be fascinated by the Medieval times, when these grand and majestic structures were built. I love the vastness of the space, the clear vertical lines, the vaults, the arches, the columns and not to forget the multitude of glass windows that conclude these striking structures. I also love the adornation and sculptures that decorate the facade, including the gargoyles and the multitude of tall spires; all creating a shroud of mystique and enigmatic darkness depicted in Gothic Novels, which are so captivating.

However, in recent years I have started to appreciate the beauty and style of the Art Nouveau. 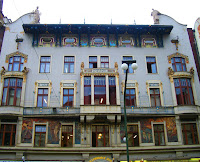 This begun already when I was a very young teenager, without my realization. I was utterly intrigued and greatly inspired by a great Czech artist, that is considered as the founder of Art Nouveau. Alfons Mucha was born and raised in the former Austrian Empire (in the part that is today Czech republic), but already as a very young man moved to Paris, where he produced magazine and advertising illustrations. As often happens in life, he was lucky enough to be in the right place at the right time and became a sensation literally over night, when he was commissioned to create a poster of Sarah Bernhardt, the most famous actress in Paris, in 1894.

I love his style that is so romantic and so accomplished in colours and shapes, often depicting women with a serene style and feminine elegance. I also find some sort of recognition in his way of creating a series of pictures; such as the different seasons, the different times of the day or the different stars in the sky, as I too find great fascination in following a change or depicting or capturing a progress. My most favorite series is for sure the ethereal beauties that depict the times of the year. Already when I gazed at his winter, spring, summer and autumn for the first time, I knew this was the style that I was born to paint myself.

On our visit to Prague this June I visited the Mucha museum which shows off some of his lovely originals, although most of them are displayed in the galleries of Paris. However, I got to see one of his absolute masterpieces, that can only be seen in Prague and not in any museum. He is the designer of one of the stained glass widows in the St. Vitus Cathedral at the Prague Castle. Watching it leaves me in a complete awe, as I find the composition, the colours and overall the style incredibly pleasing to the eye.
Particularly as the experience combines my favorite Gothic Style with Art Nouveau. 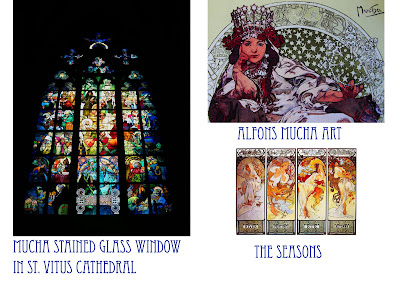 I feel, as I visit your blog, that I am visiting the world! I love that stained glass window and can see your fascination in its beauty. What a treat that you were able to see it IN PERSON.

I love Mucha! My new china umbrella stand has a design of his on it. Lovely post... as usual!!

I think you would have loved the fairy tale books my grandma had and that I now possess. They were illustrated with gorgeous art nouveau pictures. I would linger for long whiles over those illustrations, enjoying both the simple lines, and intricacies they produced.

Gorgeous!! You are inspiring me to figure out a way to get back to Europe and the Czech Republic and experience their beauty once again.

There is really nothing like this in the USA...especially in Southern California!
My city just had a HUGE celebration for its 25th anniversary! Yeah, that's a very old city in these areas!

These are all so lovely!

I love Gothic architecture! I'd love to visit more cathedrals. The US just doesn't have that kind of architecture, really. What? Washington National Cathedral and a few in New York? I like Art Nouveau a lot less, though, although it does have its charm occasionally. Diane and I have a friend whose house is Art Nouveau design inside and out. It was built (I want to say) around 1925 or so. It's very interesting.

That window is AMAZING!

I don't know who Mel is talking about! I'll have to ask her.

When our family went to Europe in 1977, my father took us on a tour of battle sites and churches.

I do like the Mucha art. I recognize the work from posters in the 60s and 70s.

What lovely pics...as always! I am amazed at how these cathedrals were constructed. I get emotional when I'm standing in front of a stained glass window. I have been to a few breath taking cathedrals...Just beautiful.

Speaking of beauty...Happy belated B-day to you my friend. And I just love that pic of you and your dad (very handsome)...now, I still hate you because you are younger than me! :D
But, I know what you mean about time marchin on. :(

I enjoy the progress report on your flowers. More beauties! ;)

That window is beautiful.

That is so funny that you brought up how influenced you were by Alfonse Mucha, because I studied his work quite a bit in the beginning of college. I had a professor that said my work had an art nouveau quality and suggested that I look him up.

I hope that you enjoyed your birthday!!

There's something deeply mysterious and strange about Gothic structures, I always think!!

=Jill,
ah, what a nice thing to say, I am happy you feel that I bring some of the world closer.;))xoxo

=BPG,
so glad you recognize his work, I sure would love to see that umbrella stand.;)) And I am always happy when you visit.;)) xo

=Keera,
we both share the beautiful sentiment to have fairytale book that once belonged to our grandparents.;)) I can so understand how those images captured you - as children we tend to pay attention to such things.:)
xo

=Julie,
I hope you will make it back to Prague once more.;))
Yes, the US is are relatively young country, here we celebrate more like a 1000 year of the existence of my city.;)) But there are other things that you have, like the eternal sunshine.;) I envy you that as here we have now rain and cold.
Always love when you stop by.;)
xo

=Little Lovables,
thank you so much.;)) xo

=Mel,
yes, that is the beauty of the history that Europe harbors, so many cathedrals almost everywhere.;)) I agree on the Art Nouveau, not all of it is pleasing.;)) xo

=Diane,
hehe, let me know if you figure out what house Mel thinks about.;))
Glad you liked the stained glass window.;)) xo

=Kat,
what an exciting journey it must have been.;)) It is correct, Mucha's art can be recognized from posters and is an inspiration to some of the modern ethereal posters that line the walls in teenage girls rooms.;))

=Lulda,
than you dear!;)) For the kind words and compliments and best wishes.;)
Yes, time waits not, so we better make the best out of it.
Always glad to see your comments.;))
xoxo

=Donna,
I knew the artist in you would appreciate the beauty in the window.;)
xo

=Reasons To Be...,
not to worry and thank you for your wishes.;)) I appreciate them.;))
Glad you too liked the cathedral window.;))
xo

=Holly,
thank you dear friend, my birthday was wonderful, I got to enjoy that which makes me happy.;)
How interesting that you studied Mucha's art. I am not surprised at all that your teacher thought your style was Art Nouveau, I think it has to do with the fact that you (just like me) are a romantic.;)))
xo

=MelRox,
glad you too are inspired by Gothic style.;))

=gaelikaa,
welcome! And yes, there is something mysterious about those structures, I agree.;))
Thank you so much for stopping by.;))

I never knew that Mucha had created Stained Glass art too - Gorgeous, and I shall definitely look out for that if I am ever lucky enough to be in Prague, Z! Merci! x

=Fhina,
hope you can see it one day in reality, it is fantastic!;))
xo