I guess I am one of many out there that will dedicate a post the Apollo 11 mission today. Forty years ago, the world sat mesmerized in front of the TV sets, watching with fascination as a man took the first steps across the lunar surface. That famous sentence; "That's one small step for [a] man, one giant leap for mankind", was uttered by Neil Armstrong, as he performed the first moon walk ever.

On July 20, Armstrong and Aldrin became the first humans to walk on the Moon, while Collins orbited above. 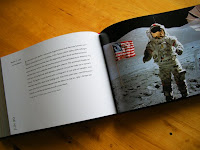 I am completely in awe of this achievement. I think this mostly due to the fact that it was an incredible operation performed with detailed precision, with absolutely moderate technology. So many steps and all of them had to work, yet with very primitive instruments, at least seen through the eyes of modern technology. In fact, the Apollo rocket is considered so successful, that a new spacecraft is being developed by NASA, based on this technology. Called Orion, it is under development and is destined for a new moon landing within the next 20 years, most likely with the goal to colonize the Moon.
This means that the Space Shuttles Program (Space Transportation System (STS)) is about to retire. The reusable spacecrafts have proven far less economical than originally assumed and will hereby fly on their last mission next year.

As you say, things were primitive. They used computers that have less computing power than my cell phone has. It was almost like sending them off with stone knives and animal skins. :-) I admire the ingenuity of everyone working for NASA, as well as the astronauts' bravery and, in the years since, their humbleness about the worlds they introduced us to: The moon - and what our home really looks like. Which reminds me:

Protege, have you watched sci-fi movies from before we got people into orbit around the Earth? I have "Star Trek" TOS season 1 and, typical for its time (1966-67), there are no clouds shown on Earth as seen from space. After the moon program, showing the swirling fluff that sometimes hides our continents and oceans has become the standard. Isn't it odd that it never occurred to us that we could see clouds from above?

I'm ashamed to admit that I was such a shallow child that I was totally irritated that the only thing you could find on TV at the time was about the moon walk....I did watch though.

This is one of those historical moments that will never face in my memory! My kiddos see it as a thing of the ANCIENT past!! ;)
I enjoyed seeing the video.

I haven't written about it, but does it count that my own moon landed in my chair to read your post? ;)

Just catching up with your weekend posts and I have to say I do like your terracotta solar lantern - I will look out for them here in the UK. Your clematis is doing great too - I agree there is nothing quite like the elixir of summer rain!

The moon landing was indeed an achievement and I remember being transfixed by the TV coverage when was a child. I's nice to see that Neil Armstrong has come out of semi-reclusion to talk about it.

Hope you are having a great day!
Jeanne
x

PS An allotment is traditionally a piece of common land that is rented to people who do not have space in their own back gardens to grow vegetables. Allotments are so popular in urban areas in the UK that they often have waiting lists of up to 2 years. However I am lucky and my 'allotment' is actually at my friend Sue's house. Her garden is HUGE and the vegetable/fruit plot was too much for her to manage so we look after it together and share the produce.

My Dad and I were planning on going up to DC yesterday to see Buzz Aldrin, but then we heard that there would be hundreds of thousands of people, so we opted not to.

I am in awe of how far we have come in just 40 years as far as technology and all. Now we have the Hubbell Telescope and such that show us beautiful pictures.

Hey...lovely blog..
please follow my blog and i promice i will follow your and keep on commenting on your posts

Your blog is just beautiful!

I remember watching on TV! Yes, I agree...one of those events you never forget!

=Keera,
you so eloquently summarized what I think exactly. Amazing what they did with a technology that is less developed than in today's personal gadgets!
I have never considered the fact that previous cinematography did not considered the clouds. I think that just shows how limited we can be in our perception of the universe at times. I really hope they will make it to Mars in our lifetime...
Always enjoy your intelligent comments.
xo

=stevie,
hehe, of course, you were a child and if you hold not much interest in a bunch of men in a space suits, you might get a bit irritated.;))
I wish I would have been old enough to have seen it, but I was just a baby fast asleep.;))
xo

=Jill,
yes, isn't it just fun somehow to see ourself through the eyes of our children? But, of course it is ancient history in some way, as we were kids then.;)
Glad you enjoyed the clip, I think too it is well composed.;))
xo

=Jeanne,
glad you like the lantern! I was not suppose to buy it, as i was going for more traditional ones that were on sale, but when I saw this one I could not resist. I will post photos once it is lit, right now I ma charging it for a few days to make sure it is fully charged before the first use.
It must be wonderful to actually remember the moon landing...
Thank you for explaining to me about the term allotment, I thought it was what you describe, but I was not sure.;))
xo

=Jacki,
yes, it is amazing how far we have come within the last 40 years when it comes to technology. I am so excited about the Orion Program and the prospects of new moon landings and perhaps even journeys to Mars in our life times.;)
xo

=SuE,
thank you for your kind words, I will for sure repay the visit.;))

=Phivos,
thank you very much for your compliment and for stopping by. Please come back again.:)

=Holly,
yes scientist I am !;)) So right you are.;)) I guess I am a combination of contemplative scientist and a romantic artist.;))
I agree with you. Humans have done a lot of bad things, but the mankind is also capable of incredible achievements. Therein lies the magic of our species.
Always love when you stop by.;)
xo

=Betsy,
I envy you; I so wish I could say I remember watching this! But I can not.;)) Even the Irishman remembers it; what an incredible memory.;))
xo

As we celebrate a great achievement of mankind ... I am also amazed by the amount of trust Armstrong had in the program that he let himself been flown out to another planet... It is not a easy decision either.

You're reading my mind, I'm sure, because you know that I loved this post!

=Sumandebray,
I know what you mean. I would be way to scared to leave the Earth. I am terrified of flying on a normal plane, therefore no one would make me board a space shuttle or rocket.;)) But I still find it so interesting nevertheless.;))

=Mel,
sure I know you loved this as you wanted to be an astronaut and you love anything that has to do with Space.;))
xo