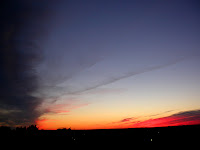 Today is the official beginning of the white nights that are in Danish (and most likely in the whole of Scandinavia) called "Light Nights".
This to me is the beginning of the absolutely best time of the year, which will last until August the 8th, when the white nights end. Although the duration is only a few months, these are the wonderful summer months of the North.

Denmark, with its position in southern most Scandinavia doesn't get the full benefits of the white nights; although to be honest, the intensity in which they manifest themselves here is more than sufficient to me. Starting today, by which time we have gained about eight hours and thirty minutes since the winter solstice, we are approaching the summer solstice in June, with a difference of a total of almost eleven hours of sun. This means pretty much another day full of light. When the weather is clear, sunsets can be watched late and night. Once the sun has set, leaving the sky blood red for hours (as seen on the pictures here, taken in June 2005, around 11pm), if one looks to the east, the sky is already turning rosy red at an imminent sun rise. I am thoroughly fascinated by this northern phenomenon, when the nights are truly "light". All we get is a dark twilight at the best, lasting in the hours close after midnight to about 3am, when the sun rises again. The birds start singing about half an hour before and therefore my biggest problem in the summers is to make sure I fall asleep before 2am, or I am doomed not to sleep at all.

I have once spent some time in Finland in the middle of June, with some good friends of my parents when I was in my early twenties. We were at their summerhouse on an island outside Helsinki. I will never forget how significant the white nights were there. Or rather, the nights did not exist. At about 1am it became dusk, but instead of turning into night, it turned into sunrise. I did not sleep at all for 10 days and suffered from terrible insomnia.

Nevertheless, I love the immense difference the North offers between the winter and summer - the “light nights" to me are a blessing, not curse. They are a fantastic and unique reward for enduring the never-ending, dark Scandinavian winter. 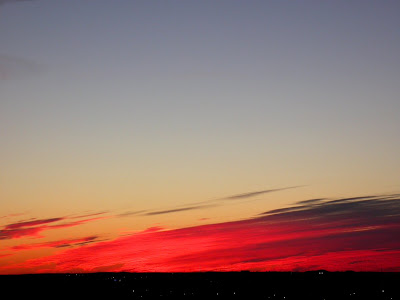 I'm not sure how I'd feel about these white nights. I do know I'd dislike your long, dark winters and summer would be a well-earned reward, but I suspect I'd fall into the same sleepless pattern that you did in your twenties. So much to see, so much to do, and so much daylight time with which to do it all. I'd settle for a month of White Nights perhaps with a White Knight. ;)

Oops.. just reread and saw that it's "Light Nights." I'll still take the White Knight. Thanks!

So interesting! I think I'd need one of those sleep masks and heavy dark curatins on the windows!

Absolutely gorgeous!! I must make it to Denmark soon...maybe even next year, as I am planning a trip to Paris with a friend!
Beautiful!!!

I have never heard of Light Nights...so interesting. I also enjoy the longer periods of light...I think I could sleep despite the extended hours of light...I would use those lovely days to work in the gardens or sit and read in the sun!

They're called "lyse netter" in Norway, at least. :-) I've also heard "blond nights" which is rather fitting since a lot of Scandinavians are blond.

What you experienced in Finland is what we have in Bergen during the summer. One of the most beautiful light nights I have experienced was when I was coming home from a boat trip on a calm, clear June evening: The sky was pale blue with pastel fruit colors from the setting sun, reflecting on the fjord, contrasted by the black (silhouetted) landscape. The sunset darkened to a nice salmon red behind the mountains, moved from northwest to north to northeast and by 2 am had turned into a sunrise. I so wish I had that all captured on film!

A sunset near 11:00 at night! That is something I would like to experience once in my life.

I am much further south latitude-wise(or is it longitude? I can never keep them straight in my head)--our longest day would be closer to 10:00 if anything. I do remember a July spent in Quebec City and how much lighter it seemed to stay into the night.
That is one of the great things about the summer months--you seem to have more "day" to be alive in and more energy, too.

I think I could handle that for a short time... right now, it doesn't feel as though we'll ever see the sun again :)

They sound heavenly and dreamy. I have always enjoyed summer evenings. The feel, the smell. They were sometimes almost ethereal to me,...like something out of a book. I am so happy for you that you are finally in your element!!

=Hilary,
it is fine with using the term white night, as I think that is the international term; in Scandinavia they like the light so much, they used it to describe the nights that are truly full with "light".
Yes, who wouldn't like a White Knight, right? Complete with armor, long blond hair and a white horse?;))
Always love and enjoy your comments, I will get myself together finally and write you an email, I have been a slacker in that department - but the extra hours of light should help.;) xo

=Betsy,
yes, black curtain or eye mask is the only thing that helps. However, I have a very difficult time sleeping in a complete darkness and I love to wake up to the natural light, so having it pitch dark at all times would be very disturbing to my natural rhythm.;)
Thank you for the kind compliment on the picture, I thought I would update with a more recent one.;))

=Julie,
you are welcome to come and visit any time, it would be great to meet you.;)) I would love to have you over.;)
I can not believe you have plans already for next year - I barely know what will happen next week.;)) Impressive - that is what I call planning.;))

=Jill,
Scandinavia is a like a different place comes summer; everyone has more energy and everyone is optimistic and full of life. And you are right, we all spend it outside, it so different from the darkness of the winter.;)

=Keera,
yes indeed, her ewe call them "Lyse Nætter", so it is exactly the same.;)
What you describe must have been incredible! We never get to experience the white nights to that extend here, as we are too low geographically. We have to wait a couple of hours between a true sunset and sunrise, that is to actually "see" the sun, but sky is never completely dark and the indication of colours of a sunset and sunrise can be observed simultaneously.;)

=Tina,
I think it is latitude, but I am not sure either.;)
Yes, this experience is magnificent and it was something I really missed when I lived in NC, where it got dark at 9pm in the summer.;)
I think you are in the same position as Rome in Italy, so you are still quite much more south than we are.;) Canada is more in the same position as us, so your experience from there is more comparable.;))

=Diane,
I am sure you would like it, even just as an experience.;)
And if it is any consolation, we have really crappy weather right now; it is stormy and rainy. The wind is strong I am worried about my pots being blown away, not to mention what it is doing to my poor clematis. Yes, yes, the wonderful Scandinavian spring is showing its ugly face. Hehe:P:P

=Holly,
you write like a poet; and you are right, I do love the summer and the spring and the light.:) I only wish the sun would come back soon; it has only been three days with rain and wind, but I am suffering already.;)
Ah, the picture; I thought I would put a seasonal one on; more summer like:;) Thank you so much for noticing.;)

Being in Central America, very close to the equator, we have - year long - pretty much the same amount of sunlight and night. During summertime, days might be 1/2 to one hour longer, but never ever as what you experience in Scandinavia. What an experience it must be!! Ohh..and the images you shared, made it sound so much more interesting and fascinating. I have learned - and seen through pictures - something new today. Thanks!

=Claus,
yes, I can imagine that the light in your part of the world is constant. I was also wondering, whether the difference between winter and summer weather-vise is not that significant, when it comes to temperature?
I am so glad you found this post interesting, always glad when you stop by.;))

Lovely post on the white nights. I experienced them too, living in Alaska--and like you, I had a big problem with insomnia for a while. Yet there really is an exuberance about it--especially, as you said, after a long, dark winter.

=sallymandy,
I often thought that even worse must be the dark days in the winter months. I mean no days at all, just a brief twilight for an hour or so when it is as worse. I have heard that only people that are born so far north an actually live there without any problems and cope with these immense swings in daylight.;)

Protege, the people who live north of the arctic circle have one advantage over those who live in milder climates: They usually have snow and snow reflects what light there is. Rainy weather makes for darker days.

I guess we all strive for that "Midsummer's night" of the enlongated day.
-
That gentle being that shared his pearls seems to be able to travle long distances. First to you, then to me ;-)