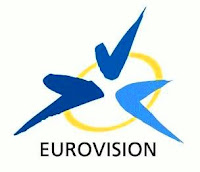 Today is a very rainy Saturday, but I find it somehow relaxing to be inside, curled up on my red sofa with Batcat, reading a good book, while we await an evening of a famous European tradition; the broadcast of the annual Eurovision Song Contest. Most likely unknown to anyone outside Europe, this years contest is held in Moscow. As the name implies, it is a singing contest with entries from a multitude of European countries, which compete for the best song - some performed in the original language.

I think Europe might be divided into two camps in this respect; those who watch it and are great fans and those who couldn't care less and consider this broadcast to be a nuisance. I am not sure to which part I belong, but I have been definitely fan for many years; however as time passes, I find myself switching sides.

The song contest was first held on 24th of May 1956 in Lugano, Switzerland. Much has changed since its first concept. In the eighties, it was a broadcast that use to unite Sweden, where I grew up and the following Monday everyone would scrutinize the contest and would discus whether the "right song won". Although the winners would most of the time be soon forgotten, the competition still held some consequences for the participants. It launched the carrier of Abba that won with Waterloo in 1974 and also helped to jump-start the success of Celine Dion who competed and won for Switzerland in 1988.

I did not know much about the contest in the nineties, as I lived in the US, but upon my return I noticed a great change. It has become bigger, encompassing almost the whole former east bloc including many small countries in the former Soviet Union. In fact it is such a large an event today, that it is split over several days with two semi-finals. Today the competition is additionally surrounded by much controversy, in respect to for how the winners are decided and how the votes are counted.

I will watch the contest tonight more with amusement than anything else. Denmark has qualified through the semi-finals and will compete in this evenings final, making the event slightly more exciting. I do not have favourites, but I like the Norwegian entry. However, the Danish contribution entitled "Believe Again", performed by Brinck is actually not bad either.

I guess most of all this broadcast holds another sentiment for me and that is the sentiment of the European Broadcasting Union with it's particular signature melody and logo, which usually proceeds any European broadcasts. This means televised programs, that are send simultaneously in many countries. There is a feeling of a connection with other countries, when the so very familiar melody comes streaming from the TV set. Many know it so well, but very few are aware of the fact that this musical piece is "The prelude to Marc-Antoine Charpentier's Te Deum, H. 146, a rondeau".

Every time I hear this unique tune, which has not changed for decades, it will always make me feel as if I am part of a united Europe.

I'm always amazed every year by how into Eurovision Europeans seem to get every year.

I get all sentimental when I hear the Eurovision theme, too. BTW, I just voted for Denmark's entry. :-)

And thanks to Denmark for giving Norway 12 points, and helping us win! I'm going to bed happy. :-) (I also thought it was a good show, with no dull parts.)

Hello, dear friend! I've just caught up on your blog for the last week and wanted to say HI!!! Speak soon... xo

I love the song 'Believe Again', its pop and contemporary. What a marvellous traditon you've got there and more than 50 years going!Amazing.

=Keera,
glad you share the sentimental feeling when watching the Eurovision theme; I think this can only be understood by someone that has lived in Europe for a while.
Again, congratulations on the win! Norway had a great song (it was my favorite as I wrote) and I have to conclude that the best song won this time! Looking forward to the finals in Norway in 2010!
And a happy "17th May" to you!;)))

=Diane,
welcome back, I missed you!;) xo

=Mahmud,
glad you liked the Danish song! Yes, it is a very old tradition and for me it is something I grew up with; it has always been there.;))

Thanks, Protege! Norwegians are having an extra wonderful national day this year. :-)

I cannot think of Eurovision without envisioning "Father Ted". I like the Brinck song - too bad he's not singing in Danish, but he has a nice almost countryish-rock voice. I'd buy it.

I just read about "Batcat/Samson". Oh, he's so sweet! We have an all-black fellow called Gilbert. He's my big 15 year old baby! We think he's got Siamese in him - long, lean, and howls just like one. Love him to bits!

=Keera,
my pleasure, I am wishing you a lovely national day.;)) Hope you are having additionally a great Sunday.;) xo

=Poetikat,
yes, he did well, our Brinck, but unfortunately he ended up #13. Which is not bad out of 20 something countries.;)
Cats are just perfect pets; the are independent and have true personalities.;) I so understand that you love Gilbert. Batcat sends his regards.;))

Oh, i love watching singing contest. The Eurovision contest in your place sounds so big. And i can tell its very popular over there, because it helped to the success of Ms. Celion Dion- one of my fave singers and many other artists. :)

Noelle,
yes, it made Celine famous.;) This year a cute young violinist from Norway won, although I think he is Russian originally. Today Europe is getting more and more united and the borders are disappearing.;)