Driving home from work on Monday evening this week, as I was passing the coast, a magnificent moon was seen rising just above the bay. It was almost full. The evening sky was jet black and absolutely pristine and the image I saw was mesmerizing.

The disc was large and very bright, reflecting in the surf of the "arctic beach", which is still snow covered, but yet once again ice free. Almost as if suspended in the horizon, the nearby lighthouse could be seen underneath the moon as a small light dot, turning on and off with regular intervals. All this created an almost enchanted landscape. I simply had to stop to take a picture.

With my camera at home, all I had in my bag was my iPhone and the pictures I took became unclear, resembling a rather diffused aquarelle, doing no justice to the reality as I recall it on that magical Monday evening.

Determined to capture a better picture on my way back from work at the same time a day later (yesterday), I was equipped and ready with my camera, battery fully loaded. The evening was yet again clear, but to my surprise, no moon was in sight. Bummer! Compared to the sun, which rises and sets with minimal difference from one day to another, the moonrise can differ as much as one and a half hour within a span of 24 hours.

Not that the pictures would have been much different. Not being able to capture adequately the image of the moon has caused my irritation level to rise on many occasions. I love my small "point and shoot" camera, but it has no zoom to speak off and thus my moon pictures continue to look bad.

Just before bedtime yesterday, as I was extinguishing the lantern outside my front door, the white disc was once again visible in the night sky. Smaller then the day before and partly obstructed by clouds. I could not resist taking one more fuzzy shot, this time with my camera.

This natural satellite of Earth holds my everlasting fascination and thus I can not help continuously trying to capture the beauty of this celestial object, no mater the quality of my pictures. 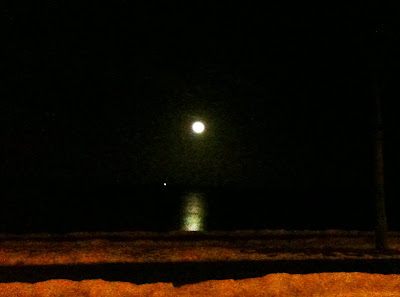 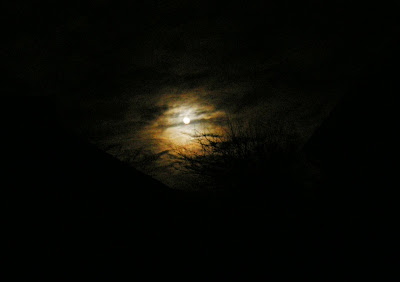 How I love the moon! You know this and I also caught a glimpse of it as I was walking.

The trees provided a surreal setting to the already lovely moon.

I love the moon too! Anyone who read my profile info would know! :D

Yes I've been moon watching too. The last two nights here have been very clear, and so it's a bit frosty this morning. I like your last photo as the moon shows up against the clouds more clearly.

Like you Zuzana I have always been fascinated by the moon. And I have tried to get a good photo on many occasions - so far without success. As children we were always told that a man lived there called "Mícheal an Gheallaigh" (Michael from the Moon) and was always watching us to make sure we behaved. The rocky mountains on the moon can sometimes be visible and we tried to imagine that they resembled his face.

Beautiful pictures of Mr. Moon and .... memories of Sletterhage fyr. Oh I wish I could visit that place.

Have a sunny day.

oh, that last shot is wicked cool. love looking at the moon. smiles..

You know this is my favorite thing in the world. Working at the beach I get to see the beautiful moon hanging over the ocean like this every month. It NEVER ceases to amaze me! It takes my breath away every single time!
GREAT photographs!!
Have a beautiful day my friend!

It looks so...mysterious, in the last picture. Very cool! When I came out yesterday morning (around 5 am) to pick up the newspaper, I stayed out a while, just contemplating the bright moon. It is wonderful to look at.
have a great day!!
*hugs*

We must have been on the same page Monday night. The sky here was clear and the moon shone bright in the sky.
-
My kids bough me a nice camera with a zoom lens and I was able to take a close up without a tripod. I'll post it for you on my 'pic' BLOG.
-
It's the one celestial body that we can all share together, no matter where we are on the planet.

Oh, how very beautful is the moon in your photos!
Magical!
Love the moon!
Thank you for sharing!

Dear Zuzana, tomorrow morning I shall be leaving to go on a trip to the mountains ...meeting up with some friends to go cross country skiing , be back home on Sun.
So, till my next visit here, be happy and well my friend!
You always touch me with your kind comments on my blog!
So very nice to know you, special you!

Zuzana,
You have captured the beauty of the moon as well as anyone here on earth can...truly.

I saw this same brilliant moon and tried taking it's picture too! It came out too fuzzy to post. One of the things on my wish-list is a quality camera, and I will need to wait at least one more year to purchase it.

Your last shot, Zuzana, is spectacular!!! You did it - you captured that moon in all it's glory! Thank you for sharing! :)

Mmmmmmmmm... I love the moon, always makes me think of Dvorak's Rusalka. :)

Zuzana, your moon shot is much, much better than mine was. I'm fascinated with the idea of snow covered sand and ice at the edge of the sea. I know why you kept trying to get the shot.

Beautiful photos, Zuzana! I really like the last one with the clouds. The full moon for February is called the full snow moon. Seems very fitting for your area. Thanks for sharing the beauty!

Your pictures are beautiful, as always! I do think you captured the true essence of the moon.

I never really paid much attention to the moon and I really should. I miss out on so much because I don't look for the small details.

I LOVE the last shot especially!!! Those clouds give the mood a mystical feel!!! Simply gorgeous!!! You are a terrific photographer...even when things don't measure up to your standards!!! Love this! ~Janine XO

I know that you probably would have preferred to have your regular camera, but the pics that your iphone took are absolutely perfect for that kind of moon!! They are mysterious and ethereal pictures. That is often how the moon presents itself anyway. I think that it was quite serendipitous that you had to use your iphone.

Congratulations on your first thaw. :) The pictures of the little plant life were so refreshing. Tell Batcat that I am happy for him too as I could see that he has been 'looking for spring'. :):) I know that this time of year starts to lift your spirits in the anticipation of warmer weather. For that I am happy for you!

Great pictures in spite of the distance. :-) You could try shooting through binoculars or a telescope, a trick I keep meaning to try myself, and I do know that others have tried it.

Zuzana,
I'm glad you captured it! How romantic is that!! Thanks for sharing! I would like to get an ipod someday. :) The Bach

the same thing happened to me with a magnificent rainbow. I only had my cell phone, the pictures didn't capture the beauty... but then I thought - the beauty of nature is intended to be enjoyed, not captured and imprisoned in the lens of a camera.
sometimes we get too caught up in trying to capture this ethereal beauty that we forget to enjoy it.

last night the moon seems like a huge huge plate. So big it looks so near.

i can't capture the moon either. i think it's because the magic doesn't really transfer into the camera. and maybe it's ok that way.

This month's full moon has been quite spectacular. Your last photo with the clouds and trees is very atmospheric. It's good to know we can share it's magic together, wherever we are:-)

Susan, Mel, Lynne, Blogaire, Elizabeth, Brian, Julie, Claudia, Scribe816, Margie, Laura, Zuzu, Kath, BPG, Stevie, Mark, LadyCat, sprinkles, Janine, Holly, Keera, The Bach, khulud (welcome!), Denise, Julie and Jeanne, how delighted I am to know that you all can relate to my sentiments when it comes to the beauty of the silver disc.
And that most of you struggle with the difficulty of capturing its image as well. Some of you point out that perhaps the moon is not mean to be put on film, but enjoyed in reality.
I agree.

Thank you all so very much for your kind words and for taking the time to stop by.

Beautiful shots. The full moon this month was so wonderful. the sky was actually clear for a change.