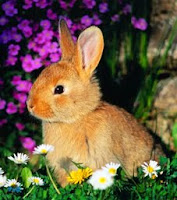 Most of us are well familiar with the tradition of the Easter Bunny, but perhaps a few are aware of the origins to this lovely spring customs.

Commonly, the cute furry creature, that is sometimes depicted wearing cute clothes, brings baskets filled with colored eggs, candy and sometimes also toys to the homes of children on the night before Easter. The Easter Bunny will either put the baskets in a designated place or hide them somewhere in the house or garden for the children to find when they wake up in the morning.

Some claim that the the Easter Bunny, just like the tradition of the Christmas Tree originated in southwestern Germany, then part of the Holy Roman Empire, where it was first recorded in a German publication in the early 1600s. A century later, the tradition was introduced to America by the German settlers who arrived in the Pennsylvania Dutch country during the 1700s. The first edible Easter Bunnies likewise originated in Germany during the early 1800s and were made of pastry and sugar.

Other legends suggest that the Easter Bunny has roots in the pre-Christian, Anglo-Saxon history. The holiday was originally a pagan celebration that worshipped the goddess Eastre. She was the goddess of fertility and springtime and her earthly symbol was the rabbit. Thus the pre-Christian Anglo-Saxons worshipped the rabbit believing it to be Eastre's earthly incarnation.

When the Anglo-Saxons were converted to Christianity, the pagan holiday, which occurred around the same time as the Christian memorial of Jesus' resurrection from the dead, was combined with the Christian celebration and given the name Easter.

In any case, a bunny at Easter - whether a chocolate one or as a decorations - together with colourful eggs is as essential as the Tree is at Christmas.

And the one below must be the cutest one I have ever seen.

I have taken my kids to see the Easter Bunny, just like going to see Santa...
And, the Bunny would visit in the middle of the night...just like Santa!
Bringing chocolate and candies and other gifts...just like Santa!
I also have little statues of bunnies in my home at Easter and little Santas at Christmas.
I love traditions...and they mean what you want them to mean.
For me, they never take away the true meaning of Christmas or Easter, just add to the enjoyment with my children!

easter bunny will be here soon! i am hoping for some chocolate and peanut butter...smiles. cute bunnies...and i dont get bent either with santa or easter bunny...i love to see kids excited.

I never knew all that about the traditions, very interesting. I shall be enjoying lots of chocloate this weekend! Have a lovely time, Kath x

And here I thought the easter bunny was Jesus! lol

Such a darling baby bunny--enjoying every bit of that dandelion and then washing up afterwards!
Thanks for sharing the video(got my daily dose of "cute" from that) and explaining the legend/pagan history behind the Easter(Eastre) bunny.

That is definitely the cutest bunny ever...

I am not sure of the origins but I love devouring the chocolate stuff ;0)

Very nice post. I like that you mention all the possible beginnings of Easter. The baby bunny is adorable.

I am so in love with that oh so cute bunny! How adorable is he, taking little pauses to chew - "now bunny, remember to chew ten times before you swallow" - LOL!! I have to say Jess was watching the screen with great interest:-)

It's interesting that pagan and Christian festivals have become intertwined over the centuries. A very timely post for Easter. Thank you Zuzana.

When my kids were young we always retrieved their baskets from the attic and dyed eggs the day before Easter. We would wash and groom, lay out the Easter outfits for church the next day and hop in bed. Then the bunny would go to work filling the baskets with candy and treats. The kids would take turns hiding eggs while we prepared breakfast in the morning. Then we all went to church to celebrate Christ's resurrection. Afterward, we met family for lunch and more Easter egg hunts.

This year I will attend church and meet family, just as I always have. Have a wonderful Easter yourself Protege!

Wonderful post. I do not know about bunny. I loved the easter eggs.

Chocolate bunnies and dyed eggs are the things that comes to my mind when I come to think of Easter. The choco bunny will be too cute to break it and enjoy.Thanks for sharing the detailed history of the easter bunny Zuzana.

Yes, very sweet little bunny. Interesting to hear that the Germans are responsible for the bunny as well. (See me next blog post. ;-) )

Zuzana,
You win the BUNNY award! That is the cutest clip of a baby bunny I have ever seen. And when she/he washed her/his paws at the end - ahhhh! We have bunnies that live in our yard and/or our neighbors yards. I watched one through our family room window one day break off a dandelion and eat it. I also enjoyed your information about Easter and the Easter bunny. The sun is out today but it is windy. We didn't get the rain they forecasted. Hurray! We have nice weather the next four days here - with sun and temps in the 70s F. My niece's 30th birthday falls on Easter this year. Oh, I better get going I'm starting to wander. Have a nice day sweetie!

I love learning the history of our firmly established traditions and beliefs. Thank you!

Joyous holiday to you andyours,

I just counted. There are currently 6 bunnies in our tiny house. I like to decorate with them at Easter, and now they stay year-round. :)
Have a happy day, Zuzana!

Traditions are lovely and whether they are Pagan or Christian, a bit of both or whether or not we know their origin at all they allow us to celebrate and to enjoy, so what's wrong with that.
I hope some nice Bunnies find their way to you this Easter Zuzana.

That little bunny is ADORABLE! He must have really been hungry : )

That little bunny is ADORABLE! He must have really been hungry : )

Hi Zuzana
Another great post!
You truly do have the most interesting posts!
Thanks for all that info on Easter.

Hope you had a wonderful day my friend.
It was the most gorgeous spring day here & I enjoyed every minute.
My crocuses are in bloom now, such beauty!

Great post! I love Easter! Mainly because it means we are in Spring!! I love all the flowers that start to bloom and here in New Mexico we see the rabbits multiply like crazy. We have tons of cotton tail and jack rabbits.

The video of the bunny is so cute. We found two bunnies very similar to the one on the video on our front porch last Spring. We had to let them go because they were attracting snakes to our house. =)

I love Easter! Not only do I enjoy the chocolate, I also love the cute litte bunnies and chicks pictured in the various ads.

Aw, that bunny is cute. My mm had bunnies when she was a child.

Very nice post. I didn't know the origins of the Easter traditions except that there were some pagan roots but now I can explain and i understand. Thanks so much for sharing. Johnina :'D

That's too cute. How will I ever eat an Easter bunny again after that!?

I wish we could turn the clock back and celebrate Easter with beautiful ornaments that are not made of plastic or in China. Maybe even hand made ones as a family activity.

Happy Easter my friend...Let the bunnies bring you all the wonderful goodies you dream about! :)

Julie, Brian, Kath, Realliveman, Tina, Eternally..., TechnoBabe (welcome), Jeanne, Stevie, Rajesh, Sukanaya, swenglishexpat, Sandy, Sharon, Zuzu, Blogaire, gaelikaa, Ladycat, Margie, Shelly, sprinkles, Nessa, Johnina, Hilary, Egmont and Lulda, I am so happy to hear that you enjoyed the story behind the Easter Bunny. And I am so happy to hear that the rest of you found the bunny clip as cute as I did.;)

Thank you so much for taking the time to stop by and for leaving such lovely comments,

Being Easter a religious festivity in Guatemala, I truly never thought about why a bunny was the typical character in other Easter celebrations. It was very interesting to learn so many facts Zuzana! I wonder now why candy is given...
Always great topics my friend!
*hugs*

Being Easter a religious festivity in Guatemala, I truly never thought about why a bunny was the typical character in other Easter celebrations. It was very interesting to learn so many facts Zuzana! I wonder now why candy is given...
Always great topics my friend!
*hugs*

Thank you dear Claudia for your kind comments on my many recent posts, your visits are very special to me.;)
And welcome back.:)
xo