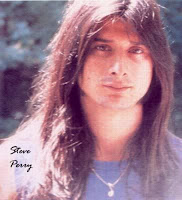 I honestly do not recall when I first heard of Steve Perry. I believe it was in late 80's. His songs were played on the radio and I was familiar with some of them. In any case I knew of Steve way before I knew of Journey, even though he became famous as the groups lead singer.

Perry released his solo album "Street Talk" in 1984 and I stumbled upon it once while browsing the music section in a department store in North Carolina in 1992. My favorite single from this album is without a question "Oh Sherrie". It is perfect through and through, with stunning harmonies, showing off the incredible power and the extensive vocal range in Perry's voice. I love the way the song builds up and the catching chorus stays in one's mind long after the song has ended.
And in one's memories forever.

Does bring back memories!! Thanks for the "Journey." (Such a bad pun!!!) Have a great day at any rate!!! Cathy

nice. great flashback. oh how i miss the 80s music scene. smiles. hope you have a wonderful weekend!

i love him. He has this incredible voice. Though the one who replaced him on Journey is a fellow Filipino, but i like Steve more. Nothing beats the original.

Sounds good, Zuzana. Thanks for sharing!

though his face looked familiar, I did not recognize his name, nor the title of the song. But when I read "Journey"...of course!!, and when I heard the first chords of the song...of course even more!! and was immediately singing it. I can truly say that I learned something new today. I know songs, and are familiar with them - as you know - but I don't know how I became acquainted with all these tunes, which is why I really enjoy Flashback Friday! ;-)) I know on Fridays I put my musical memories in order :-))

What a voice - very powerful. I don't remember this song at all, although I do remember Journey.

Have a wonderful weekend dear friend.

oh, what a wonderful "journey" to yesteryear! steve perry! be still my heart! thank you SO much for such a rockin' journey back!

winter continues on here determinedly despite all my protests - and leftover snow piles line the streets - but i am headed out and about with the sunroof open and my heater on full force!

hope your world across the waters is treating you well today!

I've actually heard it said that Steve Perry has the most perfect voice, second only to Freddie Mercury. I was lucky enough to see Journey in 1980...with Black Sabbath, Cheap Trick and a few other classic 80s bands...SO great!
Have a great weekend!

Great song and voice. He didn't really have the big hair of the 80's. I like the long straight look better.

Steve Perry has such an amazing voice.

I remember this song! I went to school with a girl named Shari and had a few classes with her. Our English teacher used to sing this song to her all the time! She was quite annoyed by it but everyone else loved it! He would sing it at the most random times, I think that's why we enjoyed it so much.

You always manage to surprise us on Friday's Zuzana with your choice of music - you certainly have a diverse musical taste. I knew the song instantly but would not have been able to name Steve Perry as the singer, however I do have "Don't Stop Believin" on my playlist - it's actually back in vogue and the DJ plays it every night in a club I frequent(Mc Gowan's).
Have a wonderful weekend Zuzana - hope Spring spreads it's wings over Denmark!

I remember Steve growing up. I load, did I just show my age?? LOL

Zuzana, Steve sure was a cute hunky guy! This is one in my small collections of songs about me! Though he spells it ie instead of y, I'll take it! What fun these flashbacks are! Sherry

Steve Perry definitely looks fab although I will have to come back to listen to him later as the silly IT guys have blocked your vid ;)

Cathy, Brian, Denise, Mel, Tony, Claudia, Jeanne, Gypsywoman, Julie, LadyCat, Nessa, sprinkles, Blogaire, Realliveman (welcome!), Sherry and Eternally Distracted - it is always great to hear when some of you recognize my flashback music. And it is equally exciting bringing something new your way.

Thank you so much for taking the time to listen.

I missed this one when it was new, but it showed up on a compilation and was given a 5-star rating in my iTunes collection. Easy on the ears and eyes, is our Steve Perry. :-)

He has one of the greatest voices in music history, IMO..I saw Journey on their Raised on Radio Tour ( the last one with him as lead singer). Journey still records and tours here in the states, but without SP. The new singer can't hold a candle to "The Voice"...

Keera and Rebecca, I am happy you enjoyed my choice for this Fridays Flashback.;) Thank you Ladies.;)
xo