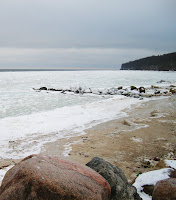 We are now officially experiencing so called ice winter in parts of southern Scandinavia. This is a very rare phenomenon, occurring only about 3-4 times in a century. In Nordic terms ice winter means that harbours and some sounds freeze. In fact, satellite images of Denmark show white cover extending over the entire country, clearly depicting the lack of visible surface water in certain bays, meaning that they are covered by ice. Actually, some inlets look rather unique, with large ice blocks floating around on the surface, creating the feel of arctic conditions.

Even the ocean in my very vicinity looks rather odd. I pass the bay every day on my way to work and last Friday I decided to stop and document this rare occurrence.
As I stepped out of the car I immediately sensed the absolute power of the icy wind on the exposed skin of my face. The subzero air felt completely alien and surprising.
There was almost a dreamlike feeling to the deserted beach, it felt unfamiliar and close to eerie. The lack of the sound of moving waves and water was immediately very palpable, its comforting splashing replaced by the whistling of the polar wind. I could see the dark open waters in the horizon, but it seemed too far out to even register in my mind.

The large stones and rocks stretching out into the sea were covered with ice and snow and I certainly felt as I have been moved thousands of miles north in an instant. The images of the summer sea, that I so love and cherish appeared almost surreal in that very moment. As much as I stood there in awe, trying to take pictures, while barely feeling the camera in my numb fingers, an almost terrifying sensation enveloped me. Looking at the iced arctic beach, I simply could not imagine the summer ever returning... 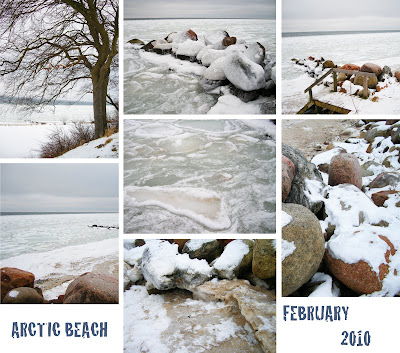 Hi, Zuzana, I have only recently started reading your posts.... and I enjoy reading them very much. I watched your video,and I must its quite eery.... perhaps its the sound of the chilly wind blowing.. and also the fact that the vast ocean is freezed to stillness.... Its beautiful, yet scary.... to me its a reminder of a power much beyond us controlling our universe....

i can't imagine how really cold there. But here it's starting to get really hot especially between 10am to 3pm. It's the el nino to some part of the Philippines but at least not yet here in our place. But am dreading the summer. It's going to be so hot and when it's hot i always get sick.

the photos are so pretty. it's been years the last time i saw a white snow.

Lovely pictures! I'll bet it seems very strange not having waves lapping the shore, or crashing...Wishing you well! Cathy

It does seem a long way off doesn't it? I hadn't thought about the lack of sound, must be strange.
Hope it warms up for you soon.

The sea does look extremely chilly(what a contrast to your last entry with the crackling fire)--our ocean(I drive past the beach and bay on my way to and from work here, too!) here looks chilly but without the arctic ice on it.
Brrrrr....thanks for being brave enough to get out of your warm car to capture the iciness on video for us today.

Your photos & video are so beautiful. And I agree it does look eerie. Mother nature is so powerful and we have no control over the conditions given us. Be careful out there and stay warm : )

WOW!
this is very new to me. So much cold around you at this moment!! Curiously enough, it's been warm here in Guatemala, and there is a certain summer feeling in the air, that I was even thinking on *switching* to a summer mode at my blog. What a contrast of weather! I've been siting here for a while thinking what my life would be like in such cold temperatures. I completely understand your longing for summer!!!
stay warm my friend!

Wow! I have never seen such a thing! I hope you were well bundled up and quickly returned home to the roaring fire and Batcat's warm embrace!
Spring is coming...I promise!

Very beautiful photos...glad you took them even though almost freezing to do it! Makes me cold just to look! ha.

Brrrrrrr, I can feel the icy cold.

As much as I can sense your sense of the landscape being 'alien' and 'eerie,'it does look very beautiful to behold. As I concentrate on the picture, even I can feel a vague sense of eeriness especially when I look at the tree.

Zuzana, you bring alive your landscape in the post.I almost know the place where you live and quite familiar with the ambiance.

It looks so beautiful and serene though with the snow covering everything.

I am mesmerized by these photos...soooo cold and icy! It DOES make it seem unlikely that warmth and sun will ever return.
Beautiful post.

Wow, those pictures do make me feel a bit desolate.

How surreal it must seem! Your photographs are gorgeous, Zuzana, and I can understand how distant summer must seem!
Sending you warm hugs,
Zuzu

That is indeed very weird-looking! The Oslo fjord is freezing up, too, but where I live we don't have that problem. (Not sure why the difference, now that I think about it.) Are you on the east coast side of Denmark?

You may moove to warmer places nowdays like Cyprus!!

I let my little chihuahuas out this morning and complained to myself that it's so chilly! Then I come visit you and see that I have absolutely nothing to complain about!

Yes, it is eerie to look out at the water and not be able to hear the waves splashing.

I hope it warms up there soon. (And here too!) One thing that might help is to remember it's unlikely you'll ever experience this kind of winter again (at least as long as you continue to live in Denmark!) since the cold and snow you have now only happens a few times per century.

I just can't imagine how cold it is there Zuzana, for the sea to freeze over like that, its a spectacle that you will surely only witness once in a lifetime, unless you move to the North Pole of course! Your photos have really captured that surreal feeling ... and the beauty too.

I think you better stay close to the fire in your previous post! Wow. amazing work of mother nature. Stay warm! :) The Bach

Wow, that was amazing! I've never seen anything like it. Thanks for taking the time to share it. And don't worry, little summer child, summer will return more beautiful than ever.

I cannot even begin to imagine such a frigid winter. I've never heard of an ice winter before, but I should stop complaining about my chilly house here! lol How DO you keep warm there? Lovely photos!

I am awed, I can't imagine it. Your words and pictures make it real. Wow! So cold.
Kat

Need I go to Denmark? It's so icy cold. But the scenery with the frozen sea and water looks out of this world for me. The only thing that I experience like this is when I open my fridge and look at the interior of the freezer walls. But there you are inside the freezer! Marvellous photos. A rare occurence. Thanks for sharing.

Oh geesh that looks and sounds COLD! Summer will indeed return, but I'll bet it will be late in the season before that water returns to normal summer temperatures. Brrrr. I love the top three photos in your collage. Keep warm, my friend. :)

Beautiful. But it's sad you are going through such a cold winter. We are going into spring in India now.

The photography is very inviting but when I read what is happening, I feel already cold and thank that I live in California, though I do miss my hometown Hamburg, which I am sure is also experiencing this cold weather.

Stay warm and I will send you some sunshine.

I enjoyed your video of "ice winter". I'm glad I'm not standing outside in that wind. It reminds me of old photos of the rivers in England and USA frozen over and hundreds of people out on the ice. it's been cold here so our snow from the snow storms is not melting. We had a little snow yesterday and today. Our poor bunny is eating the ends of our Serviceberry tree he is so hungry. I hope he can find some grass under all this snow.

Seema (welcome!), Denise, Rajesh, Cathy, Lynne, Tina, Brian, LadyCat, Claudia, Julie, Betsy, Donna, Susan, Tee Sea (welcome!), Jill, Nessa, Zuzu, Keera, Phillip, sprinkles, Jeanne, The Bach, Rosezilla, Danielle, C&V, Kat, Mahmud, Hilary, gaelikaa, Egmont and Sandy, thank you all so much for stopping by and shivering with me!;)
Yes indeed , this winter will go down in history worldwide as one of a kind. And to be honest, I am about to be done with it as well.:)

I appreciate always all your kind visits and lovely comments, that I so love to read. Thank you so much.