I have always been very intrigued by the Seven Wonders Of The Ancient World. As a child I used to repeat them in my mind numerous times, in order to remember them and had at one point a news paper clip with pictures of all of the wonders on the wall in my room, just above my desk.

I think mostly I was intrigued by the notion that they are no longer around. All are gone. All except for one. The best one of them all, the Great Pyramid Of Giza. This is the only remaining wonder and so a lifelong dream was born when I was a little girl, to one day be able to visit the pyramids.

Therefore I paid attention and early on joined the new movement, started by Swiss-originated Canadian filmmaker and aviator Bernard Weber in September 1999. He established a project that attempted to update the Seven Wonders of the Ancient World concept with a modern list of wonders, that came to be called The New Wonders Of The World.
The project's web site started in 2001 and the associated Foundation claimed that more than 100 million votes were cast through the Internet or by telephone. Of course, I did cast my vote as well in the beginning of last decade.
The final seven wonders were announced on 7th of July 2007 (07/07/07) in Lisbon, Portugal and these are the one that made the winning list: 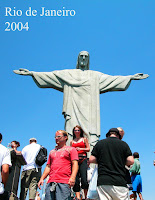 Interestingly, I have seen two of the new wonders. I visited the Collosseum in Rome as a teenager in 1983 and the memory is everlasting. In 2004 I faced my fear of flying and flew to Rio de Janeiro, where I visited the second wonder, the Christ statue.

But I still have yet to gaze at the pyramids, the wonder of my childhood dreams and imagination.

I've ticked off five of the seven.
Is that a pass?

Thank you for sharing this. It made my Tuesday morning! I've only been to the Colusseum. Now I want to see the rest!

On my list of things to see before I die too! Let's go together!!

I'm fascinated with the pyramids...any time I catch a documentary on them I sit and watch!

It must have been so exciting to see the coliseum and the Christ Redemmer statue. And how brave of you to conquer your fear of flying.
Beautiful post!

A couple of Guatemala's landmarks were up to be chosen, but none of them made it :-( Still, I'm close to a couple of the New 7 Wonders, and would love to one day be able to meet them, or all of them!! Each has wonderful history, and awakens my curiosity. It must be magical to be within the walls of such places.
Have a great day Zuzana!!
*hugs*

I hope you will see them all eventually, wouldn't it be fabulous!

Come to India and see the Taj. we shall meet and commune.

I would love to go to Machu Picchu. It just fascinates me.

Hi Zuzana
Great post, my friend!
How do you do it?
You always have the most fascinating posts!

I've been to #1 and #3!
Just amazing to see!
Maybe someday I'll get to see some of the others!

Have a most wonderful day!
And thank you for the awesome post!

I feel lucky enough to visit most of them!

I find it interesting that these man made structures are listed as the 7 wonders.
-
I've seen some natural marvels that outdo all of them.
-
Never feel cheated if you don't get a chance to see them, I'm sure there are sights that you've witnessed that rival them.
-
If you think about it we all have our own personal wonders of the world.

I haven't done any of those! I would love to see the Christ statue some time in my life. I've seen it on TV and imagine it's even more beautiful in person.

My brother used to live in Egypt. I wonder if he ever got to see any of the pyramids while he was there. Hmm, I'll have to ask!

You have me beat by two. We have traveled a lot but there are still so many places I haven't been. Good thing my Sweet Hubby likes to go with me. The collosseum is on the top of my list.
Kat

I've seen none of them in person, yet thanks to modern technology I'm free to visit each at my leisure. When in history have people been able to be in touch with so many wonders of the world? I feel blessed.

My oldest brother had a picture book of the Seven Wonders of the World when I was a little girl. I remember loving to look through it and read about the wonders. Sadly I don't know what my brother did with the book and have often thought of it through the years. Great post!

Zuzana, you always have the most interesting posts. This is a story I'll follow up on tomorrow when I'm more awake. I've always been fascinated by the ancient wonders too. Interesting and exciting to see the new pics. Off to bed now to dream of travel! Sherry at midnight.

Wow! Very interesting. Thanks for sharing. I hope your doing great and that you are enjoying your week! I hope it's starting to look more and more like Spring for you over there.

Cosmo, Brian, Janelle (welcome!), Julie, Betsy, LadyCat, Claudia, Kath, Susan, Nessa, Margie, Philip, Scribe816, sprinkles, Kat, stevie, Sandy, Sherry and Shelly – thank you all for stopping by and sharing with me your experiences and opinions about the 7 wonders of the world. Both the old ones and the new.;)
There is so much in the world to see and so little time.

I appreciate your visits and your kind comments more than I can ever express.

I've climbed those steps at Chitzen Itza, thinking about all the things that may have transpired at the top!

the pyramids are worth all of the hassle you get from the egyptians who live near them. you really should go see them.

There are places I have always felt close to, even though I have not been there. For thirteen years I dreamt of Machu Picchu every night, but since I moved from the apartment more than twenty years ago, I never had the dream again.

Then there is Four Corners here in the US. A place I feel is sacred while also made famous by John Houston and his cowboy movies in the fifties.

These are two places I feel I need to see, but in reality I think I will only be able to visit Four Corners.

Though there are more places on my list, these two hold certain powers in my heart.