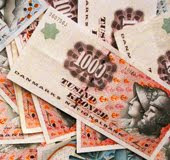 75 million Danish Kroner. That is about 13 million dollars. And some change.
That is how big the jackpot was in yesterday's national Danish lottery draw, the biggest ever apparently.

It got me thinking about money. I have never won any money and most likely never will. I never buy lottery tickets as I will not win and so there is no need to waste some perfectly good money on a loosing ticket. Money is a funny subject and everyone has an opinion.
To me it means two things: freedom and trouble.

Money is of course a necessity. I will not deny that I would happily accept one million Danish Kroner, just to pay off my mortgage. But I am not really interested in the rest. Such large sum would only keep me awake late at night, worrying about how to invest it and who to trust.

No, my dreams and source of happiness have never been tied to money. That is why I will most likely never have enough of it.

On another note, I have also been tagged (ages ago) by the lovely Tina over at Gal Friday by so called "Twos Meme". Basically, it means answering one question by listing two objects (subjects) in the answers. Anyone up for taking on this challenge is welcomed to it.

Two things you did last night:
1. Talked to the handsome Man from Ireland.
2. Slept.

Two of your favorite things to do:
1. Absolutely nothing (while relaxing and daydreaming).
2. Gardening.

Two things you want very badly at the moment:
1. To see my Irishman.
2. To have a long vacation at home.

Two people you last talked to:
1. A student in the lab.
2. The departmental janitor.

Two of the longest trips taken:
1. Drove across the US (east to west and back).
2. Flew from Europe to Brazil. I am never doing that again.

Lotteries: a tax on people who can't do maths.

So much money, but still - their lives are probably ruined now: the stress, the demands for money...

As you say, life is so rich in so many other ways...

a well poured guiness...see yet another reason i like you protege. smiles. i played the lotto twice i think. my FIL swears by it and has played it ever week since it started. he has broke even...but swears he will hit it one day and has grand plans.

Interesting subject today.
Many people think that a large sum of money will bring them happiness, yet they don’t see the pitfalls.
-
True we all need a certain amount to live our lives, but genuine happiness comes from being able to enjoy the simple pleasures in life.
-
I once read that a heartwarming memory is longer lasting than an extravagant monetary purchase.
-
As I get older I find those words more and more relevant to my inner contentment.

PS – I also find that the martini has its rightful place in the grand scheme of things.
;-)

Money, I have never won, but I have won stoves, concert tickets, appliances, cooking classes...my mom says I have inherited my grandma's luck, as she has won cars, appliances, money...only lucky lady indeed! :-)

I like the name Lilly! Sounds to me very sweet and delicate...just like you! :-) Great answers.
have a lovely day!!
*hugs*

Like you, I never play the lottery. I'd rather spend the money on something concrete rather than throw it away. I'm not very lucky in games of chance or drawings of any kind. I don't remember winning anything other than some Glimmer Spray...scrapbook stuff. My mother once won a giveaway of $1000 worth of clothing from a department store. That's about as far as luck goes in our family.

I'd like to have enough money to live comfortably...nothing fancy, just no worries about how I'll pay the bills. (which is exactly where I am right now) We are expecting to be laid off within the next few weeks or months, so my comfort zone won't last, but I am looking forward to having some time to catch up on tasks at home while I'm looking for another job.

Money is a necessary evil. I'm with you...it's not a major priority, but we all need it. I don't play the lottery either, don't understand how it works.

Zuzana,
You've hit a very good subject here and I think you have a very good view of it. :) The Bach

I'm with you and everyone else Zuzana. That sort of money can never bring happiness or even contentment - just worry and resentment! Much better to just be comfortable.

Great tag and answers - is Lily your middle name?

I'd be terrified, if I won that amount of money, that someone would kidnap one of my family or my dogs and demand a ransom.

There's nothing better than a really good beer.

A Good Meme Zuzana.
Yup! "Trust" is worry when you have Tons Of Money.This Is Why I Dont Tell People I,m A Secret Millionaire[.......err,Doh!]

What a fun tag! I love learning more about my fellow bloggers!

I've won a few $ here and there from scratch lottery tickets but nothing worth getting excited about. I once won $100 when I went gambling. It's not a lot in the whole scheme of things but I was thrilled!

I already know what I'd do if I won a ton of $. I'm sure that will never happen but it's nice to dream about!

You asked where I get my pictures for Wordless Wednesday's. Most of them I get from various emails.

To me money means freedom and if I would be lucky to win a huge amount of money I would not spend my time worry, but live the life at full, go places and see things I most likely would never get a chance to see without money.

Cosmo, ladyfi, Brian, Scribe, Claudia, Stevie, Ladycat, The Bach, Jeanne, Kath, Nessa, Tony, sprinkles, Kata, Rajesh and Blogaire; it was very interesting to hear your take on the subject of money and what it means to you.;)

Glad to learn that some of you approve of my choice of favorite beverages.;))

I am always very happy to have you visiting and your comments and kind words mean the world to me.

I wish I hadn't been so busy this week, or else I would have seen this entry sooner! Thanks so much for doing the meme.

I am the same way about money--I have always heard that lottery winners often find their life less happy after winning a big jackpot. Of course, a little extra money to help pursue my dreams and take care of my family members is always a nice pipe dream(and no, I don't buy lottery ticketrs, either)

As usual, with these memes, I learned some new and interesting things about you("Lilly"?) and you saved the best for last. I love that you like drinks like a martini and a "well poured" Guinness best.

I like this meme. I find it fascinating to learn the little details that reveal our lives...seemingly unimportant to ourselves since they are in the day to day details. I think I'll do this one sometime soon. Hope you had a relaxing weekend.

Tina and Beverlydru; thank you Ladies for your lovely words and sorry for my belated reply.;)) xo