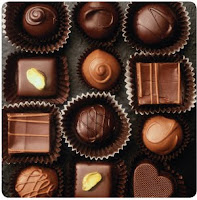 Chocolate.
A word evoking a plethora of images and emotions within us. Smooth texture, bursts of taste, feeling of comfort and happiness. Seductive pleasure. Who doesn't love the taste of this ancient indulgence?

In any case, chocolate is simply the best thing I know, even though my preference is white chocolate, which by some is not considered true chocolate at all. This due to the fact that it lacks the cocoa solids.
The raw material for chocolate production; cocoa mass, comes from the beans of the Cacao Tree, which has been cultivated for at least three millennia in Central and South America. Cocoa mass was used originally in Mesoamerica both as a beverage and as an ingredient in foods. The earliest chocolate beverages were made by the Aztecs. Known as Xocolātl, a Nahuatl word meaning "bitter water", most likely due to the fact that the seeds of the cacao tree have an intense bitter taste and must be fermented to develop the flavor. 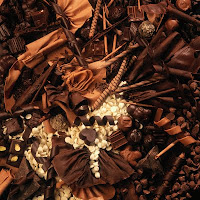 The Maya civilization used the cacao beans to make a frothy, bitter drink used for ceremonial purposes and in addition to everyday life. The chocolate residue found in an early ancient Maya pot in Río Azul, Guatemala, suggests that Maya were drinking chocolate around 400 AD.
Until the 16th century, no European had ever heard of this popular drink used by the Central and South American people. It was not until the Spanish conquest of the Aztecs that chocolate could be imported to Europe.

Chocolate has become one of the most popular food types and flavors in the world. While it is regularly eaten for pleasure, it has been linked to particular health benefits in the human body. Dark chocolate benefits the circulatory system, lowers blood pressure and it has been linked to serotonin levels in the brain.
Posted by Zuzana at Monday, March 22, 2010

I've never had a sweet tooth but now I'm hungry!

add it to peanut butter and i am in heaven...mmm...

Johnny Depp dipped in Chocolate, what could be more perfect....

I always seem to find fabulous food on posts when I'm hungry :0)

Wow! that clip reminded me of Johnny Depp and that lovely lady who made chocolates. Wow. She had a remedy for everything using chocolates.

I loved to read about the history Zuzana. The pictures sure make one crave for it. Its lent and I am off chocolates.

Ooh I want some chocolate now and I second what Kath says above!!

I see we both had a blog break - glad to hear you are fully invigorated Zuzana and what an offering this post has been. Interesting and illuminating as ever!

You must be so happy to have your wonderful garden back - spring has never been so longed for.

PS I know you have visited already but there is a poem at mine you may like ...:o)

Love chocolate...love that movie, too! Mmm.

thats perfect subject for me, Im a huge chocolate lover;)

Oh, chocolate!
My favorite!
Yummy post and great video!
Thank you dear Zuzana for waking me up to chocolate!
It's still early here, the sun has not come up yet.

Have a wonderful day my friend!

yummy for my tummy...:D
Zuzana...
I am an absoulute chocolate lover and I loved your post.... very enlightening and extreamly tempting....
Way to go..;)

We just bought an assortment of chocolates that are handmade in a little shop here. Our favorite is dark chocolate. I have never seen the movie...will have to look for it. Have a great week!

Did you know today is Lena Olin's birthday? The star of that movie. She is 55. What a great history of chocolate. I loved that movie. Think I will pull it out and watch it again.
QMM

It has always amazed me how this sweet treat derived from such a bitter bean could make ‘Chocoholics’ out of so many people.

OK.. you did me in on this one. I love dark chocolate! Thats the only kind I enjoy anymore. Yummy!
Have a great day, lady of the North! :) The Bach

Best part - found to be good for our health. :)
Happy Monday, sweet Zuzana!

Welcome back from your break Zuzana....
Ohhh Yumm... I love chocolates too Zuzana.. Will do anything for a chocolate :D
Thankx for sharing the history...

What's not to love about chocolate?? A true comfort food!! I wish the health benefits were attributed to milk chocolate and white chocolate too!!

I prefer white chocolate myself although a nice light milk chocolate is good once in a while.

You came back from your break and brought us chocolate! You're a great friend. :)

Glad you're back at writing your blog! I'm glad that they have come to the point where chocolate is "beneficial" for one's health -this way I can eat them without one morsel of guilt:)

Its Time to Live said...

Due to a food allergy, the thought and or sight of Chocolate makes me think of an 8 – 10 hour head ache. Now when I look at one of my major food groups (chocolate) I caculate the risk of and duration of a head ache, determine my plans for that part of my day and then choose to partake or walk away. Oh how I miss CHOCOLATE. It is even hard to find a good cookie that does not include this toxin.

I love the movie Chocolat. Guatemala is mentioned in it, you know? and now it is also mentioned in your blog!! woohoo!! thank you :-)
Indeed, chocolate is very popular around here, yet for some reason many prefer chocolate from abroad (?!) As a matter of fact, many places, chocolate stores mainly, have a little ad that says that dark chocolate is the one that helps health the most, and invites you to eat a little peace every day.
My favorite is dark chocolate. The kind that is almost black, and a bit bitter. Heaven!!
great post!!
have a lovely day.

I want to reach through the computer screen and partake of that box of chocolates there!

I adore chocolate too, especially white, and could eat it everyday!

I have some chocolate in the fridge that I think I might just go nibble on.

Mmmmmm... Chocolate. White, Milk, Semi-Sweet, I used to think it would be nice if someone would just hook up an I.V. and give it to me intravenously! I have a little better control now - have to, I'm diabetic! But I do love it, and can't resist having it sometimes.

How interesting, Zuzana. Too interesting. I hate to say this but chocolate is out of my diet for the time being, I simply cannot be a reasonable man when I begin to eat chocolate. I love any type of chocolate, specially the slightly bitter 80 and 90% ones... OMG I prefer to forget this.

I am also a fan. I usually prefer dark chocolate, but I like them all.
Kat

Mmmm, dark chocolate is my favorite and any chocolate with nuts is next on the list.

Loved the movie. I need to watch it again.

What a delightful post, sure to please many. I always enjoy your posts keep up the sweet work. Johnina :^D

I LOVE all the new flavors of chocolate that are becoming popular...chocolate with chipotle and cheyenne and with vinegar and olive oil...
they are SO amazingly delicious!!
Just like your blog!
:)

I can see that the tastes in respect to the kind we like wary, but we seem to agree that chocolate is wonderful – except those of you with allergies, you indeed have my sympathies.
Thank you so much everyone for your wonderful words and for taking the time to stop by.

M F-Bhushavali, I hope you were able to get some.;)) Thank you for your visit.;) xo

Chocolat! One of my favorite novels, films...and food(especially with almonds or hazlenuts)!
Lindt white chocolate truffles aren't too bad, either. ;-)

I have this body lotion made from cocoa butter, and when I put it on me, I smell like a chocolate Easter bunny and want to "bite" myself!

Tina, I loved this comment, it made me smile:; I think I completely understand you.;) xo