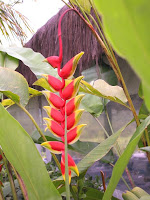 A while ago I was tagged in a Photo Meme by the very lovely sprinkles. I am suppose to find my first picture folder and list the tenth picture and the story behind it.
Anyone who feels like doing this meme, please be my guests.

I looked up the first picture folder on my stationary computer in my study. That folder, titled Brazil 2004 contained pictures from my trip to Brazil in 2004.

In November 2004 I took part in a scientific meeting held in Angra dos Reis in southeast Brazil. 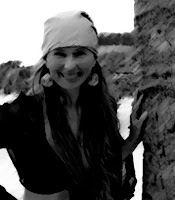 The meeting was taking place on a secluded resort in the middle of a rain forest, on a coast surrounded by small island. Beside scientific work, there was truly enough time for leisure as well. The door of my room opened directly onto a sandy beach and those 3 days that the weather was actually sunny, offered some incredibly beautiful and relaxing moments on a tranquil and serene sandy shore. The picture below - which was the tenth picture in that folder - was taken on a day like that, a few steps outside my room.

It was an absolute paradise for any biologist, as the rain forest nearby was filled with exotic plants and animals that I have never seen before, nor will I ever see again. However, rain forest means rain. Therefore those almost two weeks at the resort after the meeting concluded, were spend mostly sitting under an umbrella.

All this aside, this tripe made for memories to last a life time. And for many exotic images to help recalling those moments. 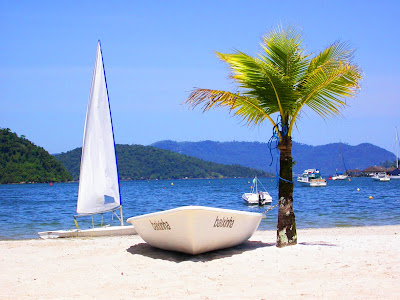 BRAZIL! i love it. wish i can fly there right now.

Oh my, how wonderful. The blue of the water is exquisite. Have a refreshing day! Cathy

Only 3 days of sun???? That would have been hard to live through in such a wonderful location. The lighting and color of the last picture is fantastic.

Awwwww.. This place is just beautiful and refreshing Zuzana, and the way you have described the place just adds on to that feel. No wonder this trip had been a memorable one for you :)

Oh how beautiful and what a wonderful trip that must have been. I spent 7 days in Belize on a missionary trip in 2005 and the Caribbean was so beautiful. The area we worked in was so sad and poor but I fell in love with the people and sometimes they come to Ky. to visit the Sisters of Charity I work with.
We work very hard to educate and uplift the women of that area.
QMM

It's such a beautiful place! And I can imagine how interesting and beautiful the plants and animals were. Sounds like paradise.

Great picture of you Zuzana, your smile says it all, a happy lady!
I can imagine how wonderful it must have been to step out to that glorious beach, a few steps outside your room, paradise!

Have a most wonderful day my friend!

It is such a nice place ... matching is your description

Your 10th picture would be perfect for a postcard! The blues in that picture are amazing! How depressing it rained most of the time but I'm glad you got to experience the sunshine too!

Yes, I've heard of Pasta Carbonara but I'm not sure that I've ever tried it. How interesting that the original recipe included a raw egg! I didn't know that!

You already know my fascination for that place and NOW this post!

I loved the visuals. Gorgeous! Zuzana, geography and you have some karmic connection. I can see geography in all your posts! Research scientists are quite versatile personalities and you are proof to that! Great!

Wow - what a wonderful opportunity for you Zuzana - you look so happy - it must have been like paradise for you, surrounded by all that wonderful flora and fauna.
The beach photo is a stunner!

Brazil - wow what wonderful memories to have!
Your photo is just beautiful and your description conjures up wonderful images Zuzana.
Now I can transport myself there in my dreams - away from an UNBELIEVABLY bad day in Dublin, we had sleet, it's freezing cold and tonight there's gale force winds. Oh, and our country is practically bankrupt!

Hope it's much better where you are.

What a gorgeous photo!!! I doubt I could pull so superb randomly from a folder!! You are incredible! ~Janine XO

WOW!! That is gorgeous!! My husband lived in Brazil for two years and is incredibly fond of it.

Has anyone ever told you that you have amazing cheek bones?! :)

Denise, Cathy, Eternally…, Stevie, Nessa, Hilary. Sukanya, QMM, LadyCat, Margie, Sumandebray, sprinkles, Susan, Jeanne, Blogaire, Janine and Holly, you are always so kind in your words to me, I am so happy you enjoyed revisiting Brazil and the rainforest with me through my pictures.;)

I have many more that are much more beautiful and more spectacular than this one, but rules are rules and so I was choosing the 10th one.;))

I appreciate your visits and lovely comments always.

What a great picture! Postcard pefect I say :-)
I'm always surprised that that which is common around somebody's daily life, is exotic and new and rare to others. The flower you show here, for instance, is so common around here! I think I even shared pictures of it and of other similar plants last year, from my trip to the pacific coast. And though you experienced rain, isn't this mix of rain and sun really pretty? It makes for a great, green and flowery environment!...or is it that I'm just used to it? :-)