One of the the major appeals of Europe - in my eyes at least - has always been it's rich history. The old age of this ancient landmass is reflected in almost any of its cities or towns. Numerous archaeological finds, dating back centuries in time make this continent an absolute paradise for anyone who finds history intriguing.

To me it is of outermost fascination to walk around the streets of old towns, where the tides of times can be read in every cobbled stone, where one can physically touch walls which has seen centuries of life and death, laughter and tears - where thoughts that redefined our history were conceived and decisions that changed our world were made.
The fact that I live in one of the fifty oldest cities in the world - and actually in the oldest Scandinavian city - makes my location on the map quiet interesting.

On the same note one would ask; Which is the oldest city in the world?

The answer to this is actually not that simple. After researching the web I found that another question should be asked first; what is actually considered a city? Closely followed by the limiting factor whether one is looking to find the oldest continuously inhibited city or just the absolute oldest city, that no longer exist. That of course is somewhat tricky, as the oldest city might yet have to be uncovered. 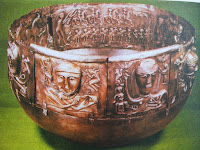 As the case is with any information find online, I have to say that there are conflicting reports to what is actually the true oldest city in the world. However, most sites list Damascus, the capital of Syria, located on the Asian continent as the oldest known city in the world. Inhabited as early as 10000 BC, it became a city of importance first around 1400BC. This is closely followed by Jericho (3000 BC) located on the West Bank and Byblos (5000 BC) in Lebanon.

In Europe, the oldest cities are found on the Greek Islands of Crete; Chania and Larnaca on Cyprus, and Athens, on the European continent, all dating back to around 1400 BC.

On the African continent, the oldest city Fayium is positioned in Lower Egypt dating back to 4000 BC.

In the Americas, the oldest city is considered to be Ticul in Mexico, from the 7th century BC and in the US most likely Acoma Pueblo and Taos Pueblo in New Mexico with settlements dating back to ca 1075 AD.

In 1999, archeologist began an excavation of Hamoukar in northeastern Syria, most likely the oldest city in the world, or at least one of the oldest. Inhabited some 6000 years ago, it came to redefine the traditional concept of the city appearance and the civilization on Earth.

Thank you for taking the tine to put this together, Zuzana. How interesting, it brings things into perspective, does it not?

this was so interesting. i grew up in an old communal farm house built around 1200AD in an Austrian town. i really miss the feel of continuous civilization.

Tales on Tuesday - Lost in Space

Another fascinating post from you Zuzana. Its wonderful to think that these ideas come to you and you trace the things out meticulously. The post evokes a certain perspective on many aspects of history. i am surprised to see that Damascus is one of the oldest cities. Damascus finds mention in the Bible and its a familiar one. But come to think of it, is it really the oldest city?

Wonderful! This is just my kind of stuff. However, sure puts into perspective the trip to "Old" Fort Smith V and I took a week ago (we'll post on it soon)...dates all the way back to 1840's when native Americans were a "problem" across the Oklahoma border. (Although, I must say I'd be a problem, too, if I were in their shoes). Gives us an understanding as to just how "new" our country is! C

Thanks Zuzana for such an informative post. You are lucky to live in such an historical city and yet have an abundence of nature all around you too. I'm fascinated by archeology and love to visit sites on my travels abroad. As I was reading your post I thought that some of the oldest European cities had to be in Greece and there they are.

How very interesting! I, too, love learning about the rich history of places. That is why I love taking vacations in off-the-wall locations. Who needs the Caribbean when you have so many places to explore??

I have always wanted to visit Europe. maybe someday!! fantastic post and info.

Exactly! Europe is a continent with plenty of history all around! It has always been my dream to go there, maybe on a tour, so that I make sure I visit every important corner a foreigner like myself should not miss. Unfortunately, taking a trip to Europe, and a tour like that one, is VERY expensive for out income, but one can dream, right? and dreams eventually come true :-)
When I was young, and deciding what to make of a career, I considered archeology. I began to like history in secondary school, and as I weighed my options, I thought participating in excavations like that one in the video you shared, and being able to find centuries of previous earth citizens, proving so MANY things, and questioning so many things, could be amazing. Unfortunately, such a career is not appreciated in Guatemala, hence had to move my eyes in a different direction. Such is life.
Wonderful thing archeology, don't you think?
have a lovely day!
*hugs*

I always learn so many interesting things here. You realy do your research and we get the rewards. Very interesting post.

Have a fantastic day, my friend!
Hope you are enjoying spring, oh, I know you are!

I hated history in school because it was all book work. I prefer to "see" history.

There is an old city that my family used to visit every summer that I love. We haven't been there in several years though.

The whole city is a museum! You can't go into all of the buildings but you can look through the windows and see how things might have looked many, many years ago.

Another interesting post Zuzana. I have been to the Taos Pueblo in New Mexico. It's own by the Pueblo Indians (is on their reservation) and there is an entrance fee. They have their college age kids giving a short tour of their church and the grounds. It is a money pit though as they ask for fairly large tips for the tour and tell you how much they expect to receive. The only pueblos you can see into the interiors are the one set up as shops. We were disappointed that they didn't have at least one pueblo set up as one would have been thousands of years ago that we could tour.

Great post! Very interesting. =) I hope your doing great. Is it Spring for you yet?

If the cobbles only could tell the stories. The stories of the people who walked them everyday. The thoughts they thought, to show us the foundation of building, creating and sustaining life. About their success and the mistakes they made. About how they found joy in their journey through life.

Which cobbles are we walking and imprinting with our life?

Have a lovely day dear Zuzana.

REALLY interesting Zuzana. I always feel I get to learn new things when I visit. When the kiddos are older, I hope to travel to your part of the world someday.

Yet another interesting post, Zuzana. I share your fascination with history, how you can visit a place connected with something or somebody important from history, setting your imagination free as you walk there.

I know what you mean about feeling the history breathe through the things that were there to experience it. Walking that same path and suddenly feeling like others who walked the path centuries ago were right there shimmering in the air. Real history, and not dry textbooks, is fascinating. I used biographies and things with my boys to teach history - wish we could have traveled more with them, but now they are by themselves, so that's good.

What a lovely post!!! Such a terrific subject to explore and ponder...And fascinating to see what you uncovered! Thank you for a most interesting post!! ~Janine XO

It is so intriguing when you walk on worn cobblestones, or feel an ancient wall and think of the thousands who have stood where you stand. It does boggle the mind to get some kind of handle on time and civilizations. When I was in Egypt visiting the tombs of the Pharaohs, a child came up to me to hand me some bit of treasure he had dug up from somewhere, for some baksheesh. I gave him a pittance and he oh-so-carefully placed in my hand a small piece of incredibly old linen mummy wrap. When I touched it with my other hand, it poofed into dust, and fliffered away into the air.

All I could say was, "Woah, that is from an ancient time and place".

Roger, Brian, Nessa, Stevie, Susan, C, Jeanne, Jacki, Doreen, Claudia, LadyCat, Margie, sprinkles, Sandy, Philip, Shelly, Elizabeth, Jill, swenglishexpat, Rosezilla, Donna, Janine and Richard – I truly enjoyed reading your very kind, reflective and contemplative comments. There is indeed something infinitely captivating in history, as it tells us who we are. If we go back millennia, it also bring us closer to common origins.

Thank you all for taking the time to stop by, your words are always appreciated.

Great run through the history... I too like to sit and dream what was happening at that paricular spot hundreds of years ago.... maybe there were two lovers vowing to die for each other or maybe two warriors vowing to kill each other...... Good to see you back from the intermission

Sumandebray, I agree with you completely, history is like the mirror of humankind.;)
Always so happy when you stop by and thank you for your kind words about my return.:) xo