The Time Of Rose Hips. 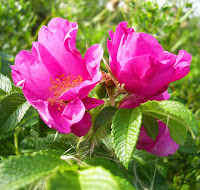 In September, the many Scandinavian Rose hips bear fruit. Interestingly, they also do flower simultaneously, a certain curiosity I have observed during the past few years.

These sturdy plans grow everywhere, even on the sandy beaches. They are dominating the landscape where ever planted and will take over within years, displacing almost any other plants, thus are perfect to use as a natural hedge instead of a fence, due to their density and impenetrable shield of thorns.

Just in front of my terrace, there is a large area that is free and almost park like. A few years ago, the county decided to cut through it with a small pedestrian and bike trail, to all our dismay. However, we were happy to learn that the trails were going to be placed on the outskirts of our backyard and to be an underpass, leading below the ground level, becoming shielded from our houses by a large dirt bank. As soon as the work was done, we planted Rose Hips all over the bare surface of the bank. Interestingly, they seemed to have completely disappeared over the years, as the ground slowly became covered by natural growing wild plants. 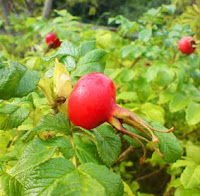 It has been interesting to observe this development, as clearly different kind of plants gain footing each year. To begin with, only grass would grow there. This would be followed by an array of Dandelions and Red Poppies. Last year, a multitude of wild flowers took hold there and this summer, Thistles have been dominating the plant life. However, slowly, the Rose Hips are protruding through the vegetation, in higher numbers and more each year. In a few seasons, they will have outnumbered and out dominated all the other plants, creating an ocean and a protective wall of vivid pink flowers and red fruit.
Posted by Zuzana at Wednesday, September 16, 2009

Everytime I read your posts about your surroundings I get get the urge to move out of the city, Ms. Z! But alas, I cannot.. At least not yet.

Maybe you should do a post about creating "small gardens" for city dwellers with very, very little space available? I would sooo love that..

The rose hips where I live seem to be especially large this year. I wonder if they taste good? Do you ever pick and eat yours? And yes, they are still flowering, too, and smelling delicious.

Yes, I was wondering if you ever eat the Rose Hip fruit. Isn't it packed with Vitamin C? I've never seen it growing. I suppose it's too warm here.

I have never heard of this flower, looks so good, and you say that the plant bears fruits as well that can be eaten..wow! I love this fact that so much is unknown to me and from the blogs I visit, I learn something new everyday.

Isn't the smell of these roses one of the best scents in the whole world?
I am glad your neighborhood's planted roses have fought through the wild plants(thistles can be tough!) and have survived. And I like how a compromise was reached where the new path was decided to be made in such a way that it was pleasing still to the homeowners in the immediate area.
We have these roses around everywhere, too--usually we call them "beach roses", and the blooms are gone now, replaced by the fruit/hips.

I didn't know that the roses and the hips could exist at the same time. Here, I'm seeing rose bushes which bloomed through the warmer days of summer now producing the hips. They're quite apparent as other vegetation begins to wither and dull down. Sadly, much like the rose bushes, after a summer of good eating, my hips are growing too. ;)

I don't know much about flowers. I quite enjoyed this post. Lots of good info.

I just love your writing <3

Lovely post. I always feel very peaceful and happy after reading what you write! Zuzana! I have this tiny little tag for you at my diary blog. There's not too much work involved and it is totally different from the usual ones. So please do come over.

These are just beautiful!

I found an old Swedish cookbook once and it had recipes using roses and rose hips. This is really interesting, and of course beautiful, to have a hedge of them.

Beach roses? what an interesting concept! :-o I suppose I am used to only have the "exotic" type in hot and humid weather, such as that one of Guatemala. Two rose shrubs are in my back patio, and I have to care after them so that they grow nicely and without much trouble. Not an easy flower to grow in Guatemala!

I've always heard of rose hips, but I never actually knew what they were... now I do! :)

=Valentine,
I think I can understand how you feel. In fact, I might have some pictures that are just what you are looking for, I will see what I can do.:))
Always happy when you stop by.;))
xoxo

=Keera,
so true, they are very red and large. No, I never pick them, I guess I should. I just do not know exactly how to use them, although I know they can be used to make tea and jam.;))
xo

=stevie,
you are completely correct; they are very high in Vitamin C. I think they are a bit difficult to pick due to the thorns. But they are widely used to make jam and of course, tea.;))
xoxo

=sujata,
you are so kind yes the picture to the right shows the fruit. I guess Rose Hips are very common to grow in a more temperate climate.;))
xo

=Tina,
yes indeed, they are abundant on beaches, all across the coast. I am amazed to see them grow there and thrive without any care. Their scent is so strong and lovely I love to walk along the beach in June when they start to flower.
Always glad when you stop by.;))
xo

=Hilary,
it is strange that they bloom and bear fruit at the same time, I think it must have something to do with the fact that September is so much warmer in recent years. I see also other plants having flowers now, when they are suppose to bloom in June.
And hehe to your last sentence, I think my hips has done the same:;)) xoxo

=Keith,
thank you so much, always happy when you stop by.;))

=gaelikaa,
thank you for that great compliment.;)) Yes, I love tags!;)) I will be right over! Sorry it took me a bit of time, but I will definitely play along.;))
Thank you for always finding the time to stop by.;)
xoxo

=Rosezilla,
that makes a lot of sense as there is almost nothing more Swedish than Rose Hips. The Swedes use it in cooking and baking.;))
xoxo

=Claudia,
so very true; roses are thriving in a temperate climate. In fact, I think I saw very few wild Roses growing in North Carolina, which has hot and humid summers. Wild roses are so common here, people almost do not even take notice.;) But should we suddenly have a Palm Tree growing wild somewhere here, it would make the headlines on the news for days.;))
xoxo

=Diane,
glad I could introduce something new to you, dear friend.;))
xoxo

Such a beautiful respite from the daily grind. I am so happy that you are sensitive enough to remind of of beauty that many, including myself, often miss with the stresses and concerns of daily living. This is always a great visit! :D)

=Michael,
I love to take notice of the natural beauty around us. It has a soothing and relaxing effect on me at all times. It also makes me realize how little we need to be truly happy; and most of all that our happiness comes from simple pleasures.;))