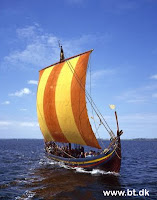 In 1962, the remains of five Viking Ships were excavated over the span of 4 months, near the town of Skuldelev, close to Roskilde in east Denmark. These ships, named Skuldelev 1 through 5, are today displayed at the Viking Ship Museum in Roskilde.

Skuldelev 2 is an oak-built, sea-going warship, a longship, originally build in Dublin around the year 1042. Approximately 30 m long and 3.8 m wide it would have had a crew of 70-80 men. A reconstruction of this ship took place at the Viking Ship Museum in Roskilde and a replica was built, using original tools and ancient craftsmanship. The ship was to be called "The Sea Stallion from Glendalough" (in Danish: Havhingsten). It sailed successfully back to Dublin during the summer of 2007, through the rough conditions of the North Sea and Atlantic Ocean. The ship was displayed in Dublin until the summer of 2008, at which time it was sailed back to Roskilde again, where it remains as an exhibition at the Viking Ship Museum.

By a chance, yesterday I caught a glimpse of a television documentary about the outbound voyage of the longship to Dublin. I was utterly impressed by the achievement of the volunteers that manned the ship, thus incredibly in awe of the extraordinary longevity and determination, which the Vikings must have possessed. The modern journey was a culmination of almost 50 years of basic research in experimental archaeology, and remains a tribute to the history of the Vikings and to the ambitions of modern man in trying to retrace it.

Amazing what the Vikings were able to accomplish. I can't imagine being alone at sea in nothing more substantial than that. The film of the ship sailing shows that it was beautifully graceful in the water.

Yep, the photo on my blog is my youngest son. He brought his guitar over yesterday to show me what he has been teaching himself.

I just love the sea, and the thought of an adeventure like that of the vikings fills me with excitement. Thanks for sharing this, and also, I love the way your blog looks!!

Vikings with their glorious history!

This is a great post. I loved to read through this. I wonder how they dared to those neverending sea voyages. For me .... no way!
Vikings have quite an history. I donot know much about them but I love reading about them in the Aterix comics
You gave a facelift to your blog. Looking Great!

Vikings, vikings, LOL...I have to show this post to my boyfriend!!!

I love your new blog design dearest Zuzana. I have started to make blog designs so if you need any help just let me know it would be a pleasure for me :-) I need to practice...so I'm happy for ever opportunity.

Have a great Monday and thanks so much for your always thoughtful comments, much love: Evi

Wow!! That was fascinating! I feel like I haven't read your blog in forever. The first week of school whipped my butt! :) I was running around like a mad woman, but now I think that we have found a bit of a routine. (One can hope.;))

I sort of like missing days from the computer because then when I log onto my favorite blogs, such as yours, I feel like I am reading article after article out of a great magazine. It really fills my well! I adore the pictures from your end of the week post, and I have to wish your blog a Very Happy first Birthday!!:):)

I love the new look and the new profile picture. Maybe you will inspire me to get my hind quarters back into gear.;)

I would imagine that museaum is a fascinating place to visit. I think I prefer the name Sea Stallion! :)

thanks for posting this piece of history about the viking boats...I'm surprised they were found and excavated after uch a long time

I feel like the Vikings have been overlooked quite a bit in our History classes over here. As much as I love History, I don't think I was even aware of of everything they did (good and bad) until I was grown and became addicted to the History Channel!

=stevie,
yes, you termed it perfectly, it is graceful. In fact it can sail very fast, cutting through even very shallow water, due to its sleek design.
The picture of your son is truly beautiful, very serene and artistic. xo

=sujata,
I agree with you on everything.;)) Thank you for your lovely words of compliments.;)) xo

=Sumandebray,
great to see you back, I missed your comments.:) I thought this place needed a bit of overhaul and a name change.;)) Glad that you enjoyed reading about Vikings;I think their history is fascinating.
:))

=Evi,
ah, yes, your Great Norwegian will enjoy this, he looks like a Viking too.;))
Thank you for your kind offer, actually, I might take you up on it.;))
Always a great privilege an a joy when you stop by.;))xoxo

=Holly,
I missed you dearest friend!!! Your kind comments full of beautiful, pleasant words are always very appreciated.;))
I am glad you like the new look and if it is any consolation, I am in constant awe ho how you can manage 4 kids and a home and still have time to be on here.;)) Your i are always very cherished.;))
xoxo

=Betsy,
I agree with the name.;)) Although the first time I heard it mentioned by the Irishman I though he was talking about some sort of a sea creature.;) Hehe.;))
Hope you had a great Labor Day.;)xoxo

=Baron's Life,
I agree, it must have been the soil that was able to preserve them. In fact, in Sweden a Viking Boat, I believe the largest one ever, was found on the bottom of the sea in the 80's.;)
Thank you so much for taking the time to stop by and leave such kind comments on my latest posts.;))

=Mel,
you and me both! In fact, I saw this piece on the History Channel! That and BBC and a Danish news channel is all I watch on TV these days.;))
xo

Hi - I've just found out when I opened my computer that we were both nominated for Post of The Day on David McMahon's Authorblog. Isn't that exciting? Congratulations on your nomination. I loved your post. Being from Dublin, I've always been fascinated by Vikings, in fact Dublin is basically a viking city. If you go back a thousand years, that is!

This post called to my soul...the sea and the mountains...they seem to be a part of my psyche...loved this...congratulations on Post of the Day nomination!
Sandi

You always post the most fascinating things, Z. I don't know how you do it each and every day, but you do. Congrats on a well-deserved POTD mention. :)

Wow! Thank you! That was truly such an enjoyable interesting piece to read and watch. Congratulations on your POTD mention from David McMahon.

You have a lovely blog! Congrats on the Post of the Day Award from authorblog!

=gaelikaa,
yes we have, the nomination is always an honour.;)) Congratulations to you and thank you for your lovely comment.;))xo

=Sandi,
thank you for your kind words and for stopping by.;)) Glad you enjoyed this post.;)) xo

=Hilary,
your comments are always so generous; yes, I feel I have a lot to write about, but not everything I write is that interesting, I am afraid.;))
Always appreciate you stopping by, dear friend.;)) xo

=Alix,
thank you so much for your kind words and for stopping by.;))

=Cheffie-Mom,
that was a very kind compliment, very appreciated.;) Thank you so much for stopping by.;)

Fascinating, Z! Thank you so much. I always learn something here. xo