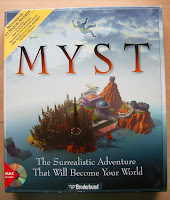 Computers, particularly personal computers were not a common feature in a home when I was a teenager. In fact, my first real contact with a computer was with a PC operated by DOS, when I was studying at the university. And even then, I used it as a sort of a typewriter in the schools computer lab to write and print out a project.

It was first when I started to work at DUKE, that I was lucky enough to receive a computer of my very own. It was a small Macintosh Classic, black and white and I loved it. Ever since then I have been a Mac addict and have never used anything else but products from Apple.

In the nineties, Apple marked shares were low and software or computer games for Macs were hard to find. But there were a few.

I never liked action games with shooting, explosions and death. These kind of violent games did nothing for me. I have always enjoyed interactive games, with beautiful interface and puzzle solving steps, solutions to which would unravel an adventure. Such was the Myst. To this day I recall fondly every single second of playing this fantastic game, so very revolutionary in every way. The player find himself (or herself) as a hero on a mysterious island, in a enigmatic setting with beautiful images. Urged to solve an intriguing story, involving a feud between two brothers, while traveling to lost worlds through the pages of "linking" books.

The second game in the series was Riven. The improvement of computers and software technology, which constantly develops, was clearly visible in this sequel. Playing it felt at times as if being lost in a dream, with images and scenes so stunning, they provided an astonishing escape to the world of imagination and fantasy.

I did purchase the first four games in the series, each better and more developed than the last. However, I was also getting older and slowly my interest in the game playing was fading.

I have forgotten all about this enticing pastime activity, until very recently. I was looking for a book and stumbled upon the old guide books to these exhilarating interactive games of my past. Perhaps, as the days are getting shorter again and the autumn season, with its rainy and dark days is closing in, it might offer a perfect opportunity to become reacquainted with some of the old thrilling adventures.

oh DOS. hihihhii.
Well it's still pretty powerful till today, especially when your OS suddenly died DOS is the way to go.

i studied computer science in college. Am a dork! hihihi

My Taylor loves all those computer games. He's got some pretty fun ones on his Iphone, too...which are nice if you are stuck waiting in line somewhere. :) I can see why they become addicting!

I played Myst a long time ago on my sister's husband(ex) computer. Never got to complete the game. But it was fantastic for the time. Very graphic. You could just sink into all the puzzles.

I came acquainted with computers early on in my life. Around 12 I think, when my parents enrolled my brother and I in a computer course. "It is the future" they said, and man were they right! And though it has become a key instrument both in my personal and professional life, I have never developed a huge interest in computer games. As a grown up I got for one Christmas a Nintendo, and though I liked playing with it, I never became obsessed. My brother got a WII a month or so ago on the other hand, and I really liked it! I'm thinking of getting one for myself some time in the furute, though my time is scarce as it is, and wouldn't have enough time to spend on it...or all of my time would be spent on it, and it wouldn't be a good thing either :-)
Interesting that you are an "Apple" person :-) Never had one before in my life.

Great post. I've never played much in the way of computer games. I have heard of Myst. I enjoyed reading your post. I learned more about the series.

Oh, another Apple fanatic, yay! Hubby and I are completely sold on Apple products. They are so easy to use and don't have so many problems. Hubby took computer programming back in the early 80s and he knows how to write programs in DOS. I never was any good at the games, but hubby likes Sim City where you have to build a city from the ground up. (But I stopped telling people what he was playing, because when I say it, they think I said SIN city! A little different connotation there, lol!)

Hey Z! I'm back again, and what a great post to come back to! I looovveee Myst and Riven and have played each several times. I have Exile too, but I haven't played that one all the way through. Just the other day I was watching the highway department clear some big trees at the side of the interstate as I was driving and it made me think of the tree you have to get in on the Island of Myst to go to Channelwood.

I've never been a computer game player. Don't know when I will.But I can relate to you my first encounter with a 'computer' in 1972. It was in Penang where in one of the statistics subject( quantitative methods)we were taught punch card system. Information from these cards need to be analysed or processed by a 'computer' which to my surprise was a huge building filled with ladders, tubes,huge equipments etc that made it look like a big ice cream factory. How on earth that computer landed in Penang university at that time I do not know. A simple laptop today could have done the processing job a thousand times better. In about two years later, the 'monster computer' disappeared and overtaken by desktop models. The speed of technological advances in computer technology from the first time I saw one and the notebooks today is extremely unbelievable. I'm prepared for more surprises.

I've heard a lot about this game, but never really had the chance to play. It's supposedly fun due to the puzzles within, and "treasure hunt" appeal to it with given clues and hints. Thanks for the review =)

When I tell Ryan there was no such thing as the internet when I was her age, she gets this look on her face like I MUST be lying. You should see the look when I tell her all phones were once attached to the wall! ;)

I thoroughly enjoyed this game, but never found the time to do it justice. The graphics are pretty wonderful.
Loved the video highlights :)

oh! I was just thinking that this would awesome in HD on a big screen TV! Hmmmmmm.........

The new powerful part of our life..

We had a copy of this. My daughter used to play it. My oldest son is a total computer geek. He loves all the games and is the first to get everything.

=Denise,
with your sense o style I would say you are anything but a dork.;)) Only a smart beauty.;)) Thank you for stopping by.;) xo

=Betsy,
I am getting an iPhone soon too and I look forward playing all the games.;)) xo

=Michelle,
ah, you are back!!! Glad that you recognize Myst, it was a great game and did so well in its time.;)) Thanks for stopping by, today's post reminded me of the first time I visited your blog, as it was when you celebrated one year blogoversary.;)) xo

=Claudia,
smart and beautiful, that is what you are. Your parents were definitely right, computers are everything today. I share all our sentiments; I also think that they are so much fun and wold like to get a bit more into programing, when I find the time.;)) xo

=Keith,
thank you for your kind comment and for stopping by; great profile picture.;))

=Rosezilla,
how great to find a kindred spirit!! Yes, Apple rules, Steve is a very innovative person and my hero in every aspect of life and work.;)) xo

=Mel,
ah, welcome back my friend! So glad you too recognize the game; wasn't it just an incredible technological marvel in its time? I think I might play it again.;)) So glad you stopped by.;))xo

=Mahmud,
what a great comment, as always! I too recognize "computer rooms", that wold house large instruments, that were not even a fraction as powerful as my phone is today.;)) The speed of technology is incredible. Always happy when you stop by.;))

=Erika,
the game is exactly that; I hope you will have a chance to play it one day, even if with today's eyes it might appear a bit old fashioned.;)) xo

=Diane,
that is so hilarious. As I am not around children that much, I do not know these little fun things.;)) xo

=Seamus,
my sentiments exactly, I was thinking of picking the games up again.;)) Let me know if you ever do and if you will use HD and big screen;)) Thank you so much for stopping by again.;))

=stevie,
yes, I recall you said your son helped you with the computer trouble recently. Isn't it good to have someone in the family that knows computers.;)) xo

I never played it but I'll bet you can find an emulator online and relive the experience. :) You know how *I* feel about my Mac... tis the only baby for me.

I love how your blog is looking and your new photo is a beauty.

=Hilary,
yes, I know your feeling about Macs as they are mine too.;))
Hope your Friday and weekend is great my friend, thanks for the best wishes above.;))

How did I miss this post? I received a copy of Myst years ago and never played it. Sigh.. I knew I was missing something! :)

=BPG,
I hope you will get a chance to re-explore it again.;) It was very entertaining, but of course, it is a bit aged now. But I kinda enjoy old, as so am I.;)
Always so happy when you stop by. Sorry it took me a bit to respond to your lovely comment;) xo