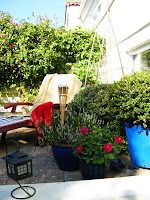 A beautiful Indian Summer week is ending with an equally stunning sunny weekend. The air is still, the sky blue and the sun is shining.
However - it is not summer any longer. The sun has lost significantly in strength and with its position low on the horizon, it no longer warms up my terrace. Already in the middle of the day, it hides behind a row of birch trees, emerging first an hour later, to cast its final rays upon my windows.

This Summer Finale is certainly a beautiful time of the year. I love summers endlessly, but the early onset of autumn holds a definite magic of its own. It brings a certain tranquility and soothing serenity. Watching the nature winding down slowly as the rich summer retreats is contagious.

As with any seasonal transitions, there is a feeling of anticipation of a change in the air... 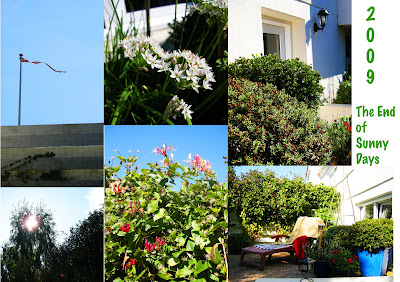 You have a very poetic way of describing the scenes of nature that surround you. Your words paint a very vivid picture and the photos add the finishing touch.

How nice that one of the last weekends of summer is so beautiful there. We are having intermittent torrential rains here...no end in sight.

I will miss summer and I already counting the days until the next spring...However I find beauty in every season....now it's the time for warm teas and soft blankets...and I love that too.

Hope you have a wonderful weekend, cheers: Evi

As always, beautiful pictures! I really, really love your terrace/garden. It looks so inviting. Hope you're enjoying this last drops of summer!

Have a lovely Sunday!

you are so right about the change of seasons. I can tell here also that the sun comes up later in the day and goes down earlier than before. days are getting shorter and shorter. fall is around the corner!!

a standing ovation as summer takes its bow...beautiful imagery in your words and pics. have a great rst of the weekend.

It's been beautiful here too the past couple of weeks.. though the last couple of nights were getting close to freezing. Next week is supposed to be rainy but hot and muggy again.. so I'm enjoying the sunshine while it lasts.. and enjoying your lovely photos as always.

The feeling of a change in the air is always welcome, even we have good time now...

This was a great summer...

=Scribe816,
thank you so much.;) I love to watch the nature and I am in endless awe of its magic; I am glad that comes out in my posts.;)

=stevie,
sorry to her about your rain, I know how you feel. Here unfortunatelly the sunny period is ending too - at least this time around.
xo

=Baron's Life,
there is something unsettling in change, but at the same time refreshing and exciting as well. Always glad when you stop by.;)

=Evi,
I agree completely; additionally I look forward to be relaxing in front of my fireplace as well.
Thank you for your always kind words.;)xo

=Claudia,
thank you dear friend, your comments always means so much. I sure enjoyed it yesterday, today rain came in the afternoon.
xoxo

=Doreen
yes, this far up north the change is light is very visible. In a way i am sad that soon the dark winter season is upon us, but we still have a month or so left before that.;)
xo

=Brian,
thank you, I think the eloquence lies in your comments.
Hope your weekend was great too.;)

=Hilary,
here nights and even evenings are cold too, but the ocean keeps us away from freezing yet.;)
I hope you can enjoy he last true warm weeks before the onset of autumn. Always happy when you stop by, my friend.;) xo

=MelRoXx,
yes, it was great here too, but way too short.;)
Hope your Sunday is lovely.;)) xoxo

I appreciate for the wonderful description of end of summer. You are a very good writer.

Many mixed feelings about summer's end. I have much to savor. lol Protege! :)

=Michael,
thank you, glad you enjoyed this.;))

September is my very favourite month.