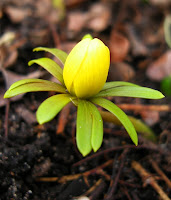 At last, the winter has officially ended. March is the first spring month, at least in the Northern hemisphere. Although in reality, this far up north, winter can hang around until April; still spring signs are now everywhere.

Yesterday I uncovered all my sprouting spring flowers; I removed the fallen autumn leaves and the left over spruce branches from my Christmas tree, that were laid over to protect the delicate stalks that were growing impatiently already in January.
The Crocuses are almost in bloom, as are the beautiful yellow Eranthis, the first flowers of the spring. In the process I found many beautiful ladybugs, that seem to have chosen to spend their diapause in the warmth generated by the decaying leaves.

In some ways, even though it is still cold and the threat of snow is in the air, I love this time of the year. It is a time full of promise and expectation, almost an awakening of the nature in every way. The days are getting significantly longer - at this point almost 4 hours since the winter solstice. The first pollen is now in the air and before we know it, winter will, once again, be left in the past. 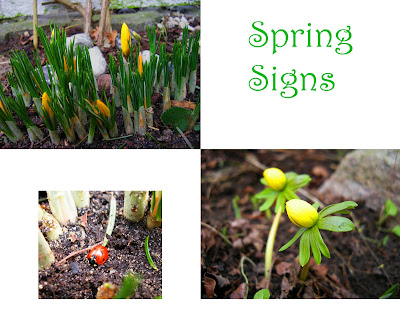 LOVE bulbs. They have so much potential and are full of hope!
Lady bugs are my favorite. They look so peaceful, yet we know they eat all the bad bugs. They are 'good luck' if they land on you too. (Not so lucky if you are an aphid!)
Enjoy the springtime my friend. Your blog looks beautiful!

Wow, that's great. No wonder people up north welcome the coming of spring.There's so much renewal. I'm looking forward to your posts as now I'm beginning to learn more cold temperate plants that seemed very novel to us here in the tropics.

oh Protege, what a wonderful sign! I can't wait for spring here but it's still bitterly cold so we won't get our bulbs for a while yet. Wonderful pictures! Enjoy your bursts of colour. :)

I am astounded you have fully blooming bulbs and even a cheery ladybug in your garden today. (while here, we have...snow today and more and more expected through tonight and worse tomorrow! My own barely visable shoots in the garden are covered up by the cold white stuff for now)
You must have felt it such a good omen to see that ladybug, too.

These first blooms of the the season are probably the most welcomed flowers of the year. Everyone eagerly awaits Spring!

Lovely. Can't wait to see those flowers around here.

Protege: the kitten on my blog is just my avatar...so cute I couldn't resist. Sallymandy is the name my grandfather used to call me, and I use it as a username for all my online business.

The first bulbs sprouting through the ground are always such a welcome sight! I've never seen these pretty yellow and green ones! Happy spring to you!

What amazing pictures, and I really like your little collage. I would love to see your yard in full bloom. I bet it is surreal. I am so happy for you that you can now see the light at the end of that dark tunnel of winter. I imagine you almost like a cat that can sit and just drink the heat of the sun into your skin, and soak in that bright orange that you can see behind your eyelids even when they are closed.

I also experienced Venus and the Moon the other night! It was etherial. I gave me a thrill when you wrote about it because it just made it very real to me that even though we are oceans apart,...we are still under the same sky!!!

=Julie,
yes, ladybugs mean good luck here too.;)) And I love spring bulbs; every morning when I get up during the spring, I look out of the window to see how much everything has grown.;)
Thank you for that lovely compliment.;)

=Mahmud,
I am sure you, as an avid and skillful gardener, will find it very interesting with the seasonal plants. I will make sure to write a post every time there is a change.;))

=BPG,
I hope that spring will arrive soon in your part of the world as well; but despite the occasional snow, it is no way back, I am sure.
I am always so happy when you stop by.:D

=Tina,
as you so well predicted in your note; I did do some gardening. When I found all those ladybugs I was pleasantly surprised.;)
And in regards to your snow, not to worry, my mother used to say it is like a cozy blanked covering the early blooming plants, protecting them. Much better than deep frost.;))

I will post a song/music today that might appeal to you, by the way. When choosing it, I was thinking of the movie we both like.;))

=steviewren,
I know you too await spring judging from the very cool picture in your header. Hope it will arrive soon where you are as well.;))

=sallymandy,
what a lovely name and a lovely story behind it.;) The kitten is so cute, I smile every time.
Thank you again for stopping by.;)

=Betsy,
happy spring to you as well! I know March is not a stable month, but it really feels like spring in the air;)

=Hazel,
aw sorry, I am sure it is passing ting and will not stick around for too long.;))

=Holly,
what a sweet and accurate comment; I am truly like a cat soaking up the sun as soon as I can.;) I will post pictures of my garden as the seasons change; right now it is a bit barren and cold still.
I agree with you on the fact that gazing at the stars and the moon makes one feel so close to others. I share that wonderful sentiment and am glad you also enjoyed that beautiful celestial sighting.;))

Your flowers are gorgeous! I wish I had the patience to do gardening around my little townhouse. I always have the intention, but never get around to it. It's hard to think about pretty flowers poking up out of the ground since we got about 4 inches of snow last night, though. Spring isn't ready to visit North Carolina yet, I guess.

=Donna,
thank you; I recall the lovely daffodils in your post recently. They will not be blooming here for another 2-3 weeks.;)

=Mel,
yes they have been talking even here on the news about the US snow storm; unusual in March, but not unheard of.;)