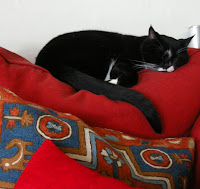 This night, we lost an hour. Or I guess, we payed back the extra hour we got to borrow back in October. Europe officially went back to daylight saving time.

In some way, I dislike the fact that my Sunday, my wonderful laid back Sunday is suddenly one hour shorter. Already my morning is effected; as soon as I open my eyes and look at the time, I realize that the time is all wrong, as in reality it is already one hour later. And I have gotten one hour less sleep. This means I will get tired one hour later this evening than I should and on Monday morning, my internal clock will be one hour delayed and it will be such an effort to get up.

But, there is also one positive aspect about this switch. It means that winter is officially over and spring has began for real. Commonly termed as "summertime", it indicates that we have just entered the best time of the year.

Below are pictures taken earlier this week, when we got the last snow of this season. Even though the snowfall became heavy at one point, the sun was strong enough to wipe out any trace of it within a few hours. 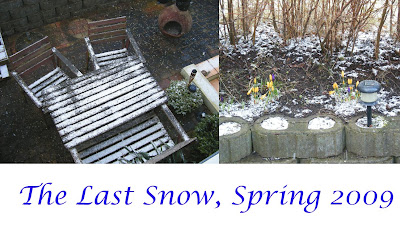 Ahhh...so you think that is officially the last snow? Now that you have written that..you know what might happen, right? ;-) (we don't dare put our snowshovel away until May 1st or else we feel we are tempting fate)

That is the lovely thing about spring snow--it melts by the next day(even within the same day, too).

Enjoy what time you have left of your Sunday--looks like Batcat is not too concerned with the loss of an hour. :-)

Our Daylight Savings switch was earlier by 3 weeks this year. I won't argue about it since it has been nice driving home with plenty of daylight every afternoon. But I miss waking to the sounds of birds at 5 in the morning. The few weeks in Spring before DST was the only time I ever woke at sunrise happily alert. Now that is not to be.

I hope it won't take you too long to get acclimated to the change.

I do find that the bitterness of losing an hour of sleep is assuaged by the fact that spring is here - just keep thinking that come Monday morning! :)

This happened to us a couple of weeks ago (really early this year) and I didn't even know it until I woke up and my clock had changed itself!

It always takes us a full week to adjust to the new time! Our bodies just know that the clock is wrong! :)

I don't know how warm is your summer? Here in Bintulu it's summertime throughout the year! This whole week the weather was very dry, few brief showers but no rain.Daily temperature average 30-32 degrees C.at high noon and about 22-24 degrees C. at pre-dawn.Looking forward to more summertime stories.

Good luck with the continuing melt. I am with you on the clock change, such a pain to loose an hour of Sunday!

When I woke up and the time was changed on my mobilaphone I was quite confused, because I still had a old time on my watch, hehe :D

Now, here is not snow too, but it is raining all the time, gosh, I think I hate rain more that snow :)

=Tina,
I was contemplating the same fact; wondering whether that REALLY was the last snow.;)))I guess I am putting my faith in the meteorologists, that have promised us spring like weather this week with temperatures close to 18C (65F). It has never snowed (as far as I remember) later than the 5th of April, so I took the plunge with this one.;))
Yes Bat can sleep ANYTIME.;))
Hope your Sunday was great!;))

=steviewren,
I agree with you on all accounts; I really like the fact that it will be lighter in the evening.
I guess once we are done with this week, we should no longer feel any pain.
Thank you so much for your always kind comments.;))

=Hazel,
so true, so true! Imagine that I have gotten the flue, yuck. So Monday is here and I slept happily through the morning after calling in sick.;)) So at least something good in a bad situation.
Hope your Sunday was great and your Monday will be even better (if that is possible).;))

=Diane,
lucky for you to have an intelligent clock. I need to change all of mine except for the computer.
Some, like the one on my old radio in the bedroom and a VCR that I still own (imagine that) are complicated to change, so I leave them on the daylight time. So, 6 months a year they are one hour off.:P
It is nice to have all my clocks showing the right time now.;))

=Betsy,
you are so right, our bodies need much more time to adjust, especially as we get older. I did not use to mind when I was younger.;)) LOL.;))

=Mahmud,
you just described my dream climate!!!
Ah, we have nowhere that warm here in south Scandinavia. In spring, which will start in April, the temperatures will start raising slowly. From 10C, what we have now, up to 20C comes May. June -August are considered summer months and on average the temperature is 20C. However, if we have bad summer, we might be around 15C almost all the time. If we have a great summer, it ca happen that for extended period of time, maybe one to two month, we can have around 25-30C.
In the summer nights, the average temperature is about 15C. However it can happen that if the weather during the day is very warm, nights can be as warm as 25C.

=Hilary,
it seems that we are still following the old system here. I think that a change in the beginning of March must be to early.;))
Yes, Batcat is totally oblivious to what time of the day it is; he sleeps ALL the time.;))

=Tereza,
yes, that must have been quiet confusing, I would agree.;))
Snow still? I hope it will disappear, so you will get some sun.;) My parents live in Prague and they complain about the weather this year too.;))

Daylight saving does not exist here in Guatemala. We pretty much have equal amounts of sun light year-round, so no need. From late March to late September, though, seems that mornings do start earlier. Instead of the sun rising at 6, it does at 5:30 am. I'm glad the best time of the year has begun on your side! Nothing better that sunlight and blue skies :-)

I hate the time change. It messes up my days too!

=Claus,
it must be wonderful to have a very stable climate, including a stable light, the whole year around.;)
The change in daylight is extremely obvious here. Imagine, that the difference in daylight between summer and winter is 10 hours! We have already now gained almost 6 h more light since the winter-solstice.;))

=Shelly,
I believe that everyone, who has some sort of routine, is bothered by this change.;) My body needs time to adjust to this loss; on the other hand I do enjoy the extra light in the evening.;))

Good to hear that summertime is there! I know you guys are longing for the sun and cursing winter to go away. And I am very excited to see your garden in its fullest bloom. hehe :)

=Noelle,
yes we are longing for summer, always after the long dark winter.
The spring is already in the air, the summer has to unfortunately wait a few months longer.;)) But we are on the right track.;))