I have often wondered what it feels like to make a discovery that is so successful, it will revolutionize the world. As I work in a laboratory, I have been involved in a few patents, but from a patent to a ready made successful product is a very long way.

Often the best inventions are mistakes, something that was not meant to be. Experiments yield the unexpected results, but because someone with imagination and an inclination to see what others failed to see is present, ground breaking discoveries take place.

Such is the tale of the penicillin discovery by the Scottish scientist Alexander Fleming in 1928. He left a petridish opened by accident, and when he later found it with mould growing all over the agar, instead of discarding it, he noticed that the mould caused an inhibition of the bacteria growth. And the rest is history. 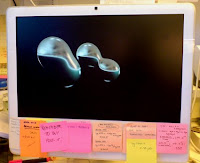 Or what about the post-it notes? At this point, there will be very few people in the world that have not heard of post-it; one of the most successful inventions to date and example of a created demand for a product. I definitely cannot imagine my life without these little "stick on notes". I use them all the time, everywhere. They are so practical and easy. The history of the post it is a mixture of a discovery of a (at that time) pointless adhesive and a need. Dr. Spencer Silver accidentally invented the adhesive in the 50's, while an employee at 3M. However, at the time of the invention, there was no apparent use for this weak glue and so the formula ended up in the company vault. There it was until the 70's, when Art Fry, another company employee needed to bookmark pages of a book without damaging them. He experimented with this long forgotten and discarded formula and ended up with a product that is today essentially used worldwide.
Posted by Zuzana at Thursday, March 26, 2009

Apparently the guy who invented the nicotine patch lives on this side of the island, just north of Hilo. I bet he made a lot of money. His house is supposed to be very nice!

I am fascinated by the fact that you have been involved in a few patents/discoveries in your line of work. To me--that must be so rewardng(even if it is a long process)
I didn't know(until now)the story of how the Post-it came about! I used to work in an office supply store and often doodled on the little square pages of the Post-it blocks, filling up an entire small sketchbook(mini art) with the best ones.

I watched a documentary a few years ago on the post-it note! It was really interesting. I would be so fun to invent something like that!

I clearly have no vision. I throw all my mistakes away. I bet the landfills are just full of my potential inventions (and fortune!). :)

Yeah...what it would feel like to have come up with a unique idea that would revolutionize the world?!! I also wonder that often times. It is interesting that you have worked with patents. Here in Guatemala we used "already made inventions", but I wonder if there's people working on new ideas? I hope so!

I am that person who is constantly asking herself "why didn't I think of that??" ppffftt! Oh well,...the world can't be full of visionary, mad scientist genius', right?? I love that you are a part of scientific history in the making!!! :)

A refreshing post. Now I understand how 'powerful' your work in the lab is. Little experiments, through accidents or incessant tests can transform people's lives and save humanity.Hope that someday you'll hit on an idea that can be commercialised and really make tons of money. Buy an island or set up a philanthropic organisation.

Very interesting post! My favorite invention to date is the Snuggie :)

I actually knew both of these things. It's always fascinating when "mistakes" become success stories.

=Tom,
how interesting, yes, I am sure he made a lot of money. That is it, the invention has to be simple and there as to be a need for it. I would love to see that house.;))

=Tina,
yes, the patents I have been involved in are of scientific-medical nature. Unfortunately you would not believe the bureaucracy one has to go through and the reluctance of companies to see the vision and benefits of your product. One of the patents is now on hold as we have no resources to realize it, which a shame as it deals with a medical test that could save lives...
I too have used post-it in my art.;)

=Betsy,
yes, I saw a program about it too.;) And I agree with you, sometimes I wonder if I ever will stumble upon anything that will give me that revolutionary idea.;)))

=Diane,
you are very visionary, just think of the incredible talent you have with words. We can not all be scientists.;)) And you have many fortunes already, I think.;)

=Claus,
there are people inventing things all the time, I think patents are filled in hundreds every day. But unfortunately very few of them go anywhere. However, just thinking of the whole computer age; so many inventions has come along just in the past decade.;)

=Holly,
yes, I agree I feel that way all the time.;))
Somehow though I think you are inventing things ALL the time; just when thinking about your blog and the creative tips and inventions you post there all the time. I bet some of them could leave to fortune.;)) You are very talented, you know.;)))

=Mahmud,
just a couple of years ago I payed attention to a strange result in one of my experiments. I detected activity in an enzyme that was considered inactive. No one before have seen that or maybe if they had, they dismissed it. Fortunately, my supervisor was a visionary that encouraged me to investigate.
Such is my work a times; even though the road to discoveries is rocky and full of obstacles, it takes me marvelous, pristine places.;))
Thank you, as always, for your vise words.;)

=Hazel,
that is perfect example of a simple, yet vital invention!;)))

=Hilary,
so am I. It is amazing and fascinating.
It also makes me wonder how many discoveries could have been made, as I am sure lot of times people will discard mistakes and see them for just what they are - mistakes. Not always are they careful enough to realize the full potential of the experiment.;)
Always glad when you stop by dear friend.;)

I have some cool little Shakespeare post-it notes... I love any sort of post-it... a wonderful invention.

=BPG,
those sounds like fun. I have some with Garfield on, looking very unhappy, saying "I do not love anything", where the word love is replaced with a heart.;) I have had them for something like 15 years, have only a few left.;))

The story behind post-it invention is amazing. Little ideas and accidental mistakes more likely leads to great things! hehe Being a scientist just like you Protege, opens you to lots of unending possibilities. :)

=Noelle,
yes, I love the post-it story.;))
Thank you again sweetie for stopping by and leaving comments on all my recent posts.;)