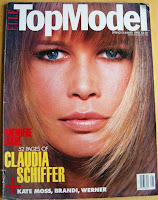 This weekend I was going through some old boxes in my basement and I stumbled upon an array of items I have not seen for many years. Some of the items originated in my childhood, even back in the time when I lived in the former East block. I love this bittersweet remembrance of times long gone. 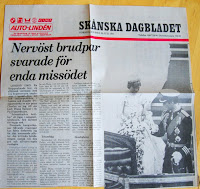 Among old drawings and some toys I also found old Swedish newspaper clippings. I guess as a young teenager I liked to save articles that interested me at that time. Such was the story of Charles and Diana’s royal wedding, printed the day after the ceremony on the 30th of July 1981.

Or the article describing the preparation for the first launch of the space shuttle in the December 1980. 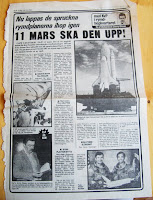 The newspaper states that it is to be launched on the 11th of March 1981, when in fact it was launched first on the 12th of April the same year.
Both of these events were highly publicized and I recall that we were even allowed to go home from school to watch the Columbia lift off. It is in some way amusing to contemplate the fact that once these were events that were happening in my present, while now they are history.

My more recent possessions of value in print are my three ELLE magazines from 1992. They are probably not worth anything to anyone, except are of sentimental value to me. It was my first year in the US and I finally made enough money to be able to afford a yearly subscription. This was in the time when supermodels still graced the covers, instead of actors and stars of reality shows. Come to think of it, it does feel like ancient history. 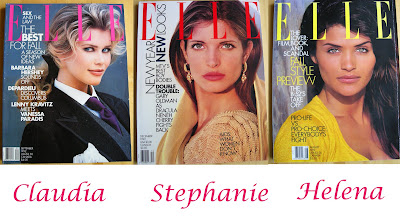 I still remember Charles' and Diana's wedding - I went fishing that day (I was 13 then).

The first Shuttle launch? I will never forget that.

Supermodels? Don't remember that stuff at all! Really, I don't!

I love trips down memory lane. Then I chuck everything :)

The past is like a huge treasure house. Never too late to be grateful to have lived so long and to discover newer treasures,what ever that may be. Sometimes we need to step back a little in order to leap forward in our lives. I do.

I can imagine your happiness when you saw those items from your childhood. It's very cute that you kept some articles you like. I can see your interest for writing there.

My mom had a yearly subscription of Vogue when I was young. And Claudia, Linda and Helena are some of the beautiful faces I always see. I remember getting inspiration from these glossy magazines. :)

Oh, this is fun! I have some old magazines from when Diana was married also, and when her sons were born. I had quite a "thing" about her, partly because our sons were about the same ages. And a few newspapers, from the day we were married and the days our sons were born, for instance.

I loved saving newspaper clippings, too! You've got a treasure trove there - I bet it was fun going through them.

What fun! This kind of personal artifacts are so wonderful. I remember Charles and Di's wedding, too (don't we all)? Photos are like scents, taking me back in a flash.

This was a fun post. Thank you! Have a good week,

=Tom,
I clearly understand why you remember the first shuttle launch, considering your profession.;) Somehow I also get why you do not remember the supermodels, but I bet you like the ones on the covers here.;)))

=Diane,
you are so funny and you make me laugh, that is always a good start on a day.;)))

=Mahmud,
your words always ring so true. The past is part of who we are and we should embrace and treasure it, as it has made us into who we are today. Always glad when you stop by.;))

=Noelle,
I am sure you were watching the supermodels already at a young age judging from your sense for fashion and style.;)) Thank you for your always so refreshing comments sweetie.;))

=Rosezilla,
glad you enjoyed this post. How interesting that your sons were the same age.;) Time flies, right?
Thank you so much for stopping by.;))

=Hazel,
I truly did enjoy that walk down the memory lane.;)) It is good for the soul from time to time; just a reminder that even though it feels so short, I have lived actually for a while now. And done quiet a lot too.;))

=sallymandy,
yes, I love the way I can dream myself back to the past by looking at a picture.;))
Your comments are always so wonderful, thank you so much for stopping by and likewise have a great week.;))
xoxo back

Protege - seriously, supermodels don't do anything for me. They just, er, don't look normal! Especially Stephanie and Helena. (Claudia looks nice but I'd be suspicious of her choice of clothing, especially at a party).

Maybe I'm weird, but if I met a lady at a party and they looked at me like those supermodels do in those pictures, I'd be outside looking for a taxi sooner than you could say "Taxi!". Helena looks ready to kill someone and Stephanie looks as though she lost an argument but won't stop there!

It's like finding your own time capsule. Fun to see what you found interesting at the time.. and what's changed, if anything in your focus. :)

I hold on to old magazines and newspapers, too(for example, a few magazines--Rolling Stone, Vogue, Glamour--from the year my daughter was born so I can give them to her one day). But I find when I have the urge to go down memory lane and look through them the mold in the paper(especially the ones made out of newsprint) or something or other makes my eyes water and I sneeze for days afterwards.
Sometmes, I think I should get these out of the house, but like you--I can't bear to throw out my memories like that.
Now that you have reminded me of top models--do you remember Renee Simonsen, from Denmark and who was huge in the 80's?? She was my favorite and then disappeared.

=Hilary,
I love the idea of my own time capsule, very well put my dear friend.;)))

=Tina,
I am just like you. A big collector. I was crying when I had to throw all my magazines out when leaving the US. I only kept these 3.;)
One day when I am gone and someone has to go through all my possessions, they are in for a true nightmare. Hehe.:P

In regards to Rene, she is still around, in fact living in my city.;) She married a Danish singer and got loads of kids. Studied psychology and then wrote some books.
I always thought she was a stunning beauty, but now after have seen some programs about here I am not sure she is my cup of tea anymore; she strikes me as quite harsh and un-feminine.
You can see more here:
http://en.wikipedia.org/wiki/Renee_Simonsen

That's what I call time travel! I don't believe Skånska Dagbladet exists any more. Good fun diving into the past like that!

=swenglishexpat,
glad you enjoyed this walk down the memory lane; you if anyone will recognize this newspaper. You can imagine how odd it was for me to stumble upon it.;)))