The tale of Bruncvík was one of my favourite ones, when I was a young girl. It had all the elements that appealed to my then naive, romantic mindset. 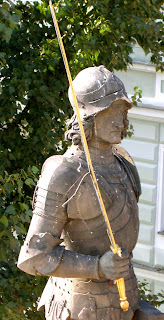 Bruncvík was an adventurous, passionate Prince, who left his young wife in Prague and embarked on travels of the world. He can be perceived as the Slavic Odysseus, as his journey took him away from his home for almost a decade, while he crossed exotic lands and foreign oceans. His experiences are countless and amazing, anything from surviving raging storms and being shipwrecked to fighting monsters with his magic sword, side by side of a mighty lion, who later became his life long friend and companion.

Eventually, Bruncvík returned home, filled with satisfaction, carrying unique, unbelievable memories. He won back the love of his wife, who was to marry another, believing him dead and lived happily until old age, with the lion, his friend, by his side.

The legend states, that his magic sword disappeared with him. It is believed, that it lays buried in the structure of the Charles Bridge. Once the Czech nation is in great need, St Wenceslaus will rise from the dead, draw Bruncvík's sword and summon the Knights of Blaník, to lead the Czechs to victory. This legend shows striking similarities with the famous tale of Excalibur.

I was completely enthralled by the story of Prince Bruncvík, when I became familiar with his legend after reading a book during my childhood stays in Prague. The depiction of him fueled my romantic fantasies. I often visited his statue during that time, one which to this day can be seen on the side of Charles Bridge. It depicts the young Knight with his magic, golden sword, his shield and his loyal friend, the Lion.

Even today, a visit to Prague is never complete, unless I walk down the bridge, close to sunset and gaze upon the eternally young face of Prince Bruncvík.
Posted by Zuzana at Thursday, January 29, 2009

I was fortunate enough to visit Prague in 2007. Fabulous! I was with my daughter, and we did INDEED, walk the bridge, stopping to take pictures of the MANY statues along the sides. Gorgeous!
I do not remember seeing Brucvik...but he will be the first I look for on my return trip.

Gee, I have no idea why you're considered an incurable romantic. Explain it to me, willya? ;)

I am with Hilary and Diane. :) And,...Prague is on my list too. I am planning to drag my husband there as it seems to me that it would be the 'romantic' vacation of a lifetime.

I was, am still, and always will be a total sucker for a good fairy tale!!!

So interesting, and it is amazing how many of our similar myths, like Excalibur, and faiths cut across rivers and continents and centuries...

I shall look out for this heroic statue should I have the fortune to visit Prague later this year, thank you, Protege!

=Julie, everyone who visits Prague falls in love with the city. It is like no other and I am proud to have my heritage from there.
The statue in question is not actually one of those lining the bridge; it is rather under the bridge or on the side of it. At least now you have one thing to look for on your next visit.:))

=Hillary, what can I say! Incurable, huh? Really, no one has ever called me that before, until you guys here. I have been labelled naive though. ;) I guess I have always believed in romance and happy endings. I will die believing in them.;)
Thank you for comments on the pictures. I took those in 2005; I particularly like the one where the statue is a silhouette against the sun. Now, that is romantic.;))

=Diane, it is a good that it is on your list; please make sure you do a trip of Europe and visit this city. You will love it.
Ok, ok, I a romantic and I will never change.;))

=Holly, you will love Prague; it has all the magic one imagines when talking romance; picturesque centre, a magnificent castle, small, secluded winding streets, each with its own story of times long gone. There is a special atmosphere, like no other city I have visited posses. I recommend a visit from my heart.;))

=Woman of no importance (although I think you are very important for sure:)
Thank you for your kind comment; I truly hope you will manage to visit Prague, let me know if you do.;))