I have to admit, that almost as soon as the clock strikes midnight on New Years Eve, I am ready for spring. I know this sounds utterly insane, as January is only the second month of winter. And here in Denmark the winter is just beginning. As seen on the pictures, we have received our first snow and the temperatures have been below freezing for the last 3 days.
January is indeed a somewhat strange month. An anticlimax to December, when every trace of Christmas is suddenly gone and all we are left with is a big hole in our pocket and in our mood as well. In my case, additionally a very dark, long and cold season is waiting ahead. To be honest, I do not like January. I dislike it very much in fact. And this year is no exception. Moreover, the house is so empty after my Irish visitor has left and it is difficult to be back at work after two weeks of vacation. I guess I am not alone in my melancholy, as several days in January have been appointed by scientist to be the worst days of the year. 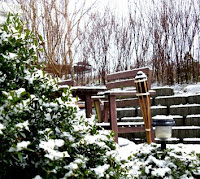 We have a saying in Sweden, which goes something like this: April, June, September and November have 30 days. The other moths in the year have 31, with the exception of January and February, which have 60 days each. It is indeed true and these are the never ending months in Scandinavia.

However, my optimistic nature doesn’t allow me to be in a bad mood for too long. Not to forget, today is actually still a Holiday connected to Christmas, even though it actually puts an absolute end to Christmas Holidays. So-called Epiphany is celebrated in parts of Europe, commemorating the visitation of the Biblical Magi to the child Jesus. This is the last day of the Twelve Days of Christmas.

And the best thing of all; here in my part of Scandinavia the day has by now become 17 minutes longer since the Winter Solstice.
Posted by Zuzana at Tuesday, January 06, 2009

I'll respond to your email when I get home later. I couldn't get into Yahoo last night (stupid Yahoo!)... xo

Well, the winter is beautiful there. I love the blue pots. Hopefully some bright, fun days will surprise you during January!

Knowing you and your optimism, you'll make the best out of what will ultimately become a beautiful season. I too will reply to your email a bit later in the day. :) Lovely photos, Z.

I too, think of spring immediately after Christmas. January and February are my worst months of the year as March brings milder weather here in NC.

The snow pictures you took are beautiful. Love the blue pots!

January is a strange month. A low time after the hoilday rush. And then it is also back to work. Sometimes I kind of wish there was an extra month between December and January to just get a breather.

You said, ".... here in my part of Scandinavia the day has by now become 17 minutes longer since the Winter Solstice."
Spoken(written) like a true optimist!

I don't mind January or February, even. It is March I have a hard time with. Every March, I wish I had planned for a trip to somewhere warm with green groiwing plants and flowers...

I'm with Gal Friday about the March thing...blah! Your pictures are lovely. Hell, I love the snow!
I really need to move to a place where it snows more. It is raining here tonight in the DC area and it is so dreary. I did get up to PA to see my family and they had snow.
So, between your pictures and my brief visit up north I will have to be satisfied for awhile! :D

I really don't miss the waiting and waiting for the long dreariness of winter to pass after the holidays. I am sorry that you are suffering from that hardship right now. The winter there does truly look beautiful though. I am also sorry that Mr. Irish had to go home.:( Absence makes the heart grow fonder???

Here in the Puget Sound region - a most northern US area - we too love to add those minutes to each winter day.

Welcome back, Z! You were missed! I totally forgot about Epiphany! Yes, I guess Christmas can really, officially be put away until later this year since the Twelve Days of Christmas is over!

You need to come to Laguna Beach, California. It is 72 degrees here every single day of the year.
Well, pretty close.
I would love to have you!!!
Come in January or February!!

Diane, it is great to be back and it is nice to have been missed.;)

Betsy, thank you; these pots are indeed my favourite ones. I am happy your winter is beautiful; I am hoping we will get some nice winter days as well. As a matter of fact, today is one of the better ones with sunshine and no wind.;))

Hilary, you are the best.;) Thank you for the compliment on the photos, coming from a talented photographer such as your self, this means a lot to me.;))

Donna I remember the winters in North Carolina and I recall that spring did indeed arrived in March.;) The worst would be the ice storms that would come in January and February, I disliked those. However, I could take almost anything as I knew that spring and hot and humid summer would arrive and that made a difference.;) Thank you for your compliment on the pictures.

Michelle, I so agree with you. The back at work is the absolutely worst.;) I like the idea of an extra month in between.;))

Gal Friday, I am trying hard to retain my optimism.;)) In some way I know what you mean about Mach; it is sometimes almost unbearable when it is still snowing and after the long winter we are so ready for spring. Lets hope this year it will arrive quickly.;)

Lulda, I agree, if the winters are proper winters, with snow, blue skies, sun and no wind, I would not mind a long winter. Hope you will get to experience snow this season.;)
So you are a winter child; no wonder you like snow.;))

Holly, it is now that I really envy you your location.)) Please send me some sunshine.;))
Yes, it is a bit odd now when I am alone again, but getting lovely comments such as yours helps me a lot.;)) And you are so right about the absence.;))

Bill, I guess you too are counting every minute then? Glad to find someone who is looking forward to more light as much as myself.;))

Mel, nice to hear I was missed!;)) Yes, you know, Christmas lover such as myself knows all the details of those Holidays, but I promise, now it is definitely over and you wont hear more about it until later this year. Then you can say again that I made you do it.;)))

Julie, ah, that would be lovely! Please do not ask me too many times, I might take you up on that offer.;))) Thank you; enjoy the sun and heat for me as well.;))

In English countries, the saying goes:

Gee, I haven't said that for years :)

My husband is Danish and lived in Sweden for years...

In italian...30 days has September and so April, June and November, February has 28 alone, all the rest have 31! I love January. I live in Italy, south Italy, where the hot and the humid is incredible...I love the winter without tourists and too much people...I don't love spring..ciao

I think possibly the point is missed that since January and February are so cold and depressing they just seem to have 60 days each? Unlike the 30 days hath September, April, June and November saying...

Braja, hi there! Yes indeed, that is the traditional saying.;) How interesting that you are married to a Dane; I grew up in Sweden and now live in Denmark.
Thank you for stopping by.;))

Gufobardo, how lovely to live in such a wonderful country! I envy you the climate, it is way to cold for me this far up north.;)
Thank you so much for stopping by; please enjoy the tourist free off season in pleasant weather.;)

Anonymous, you are right on! I think you are the only one who got it!! Great!;))
Thank you for stopping by, please visit again.;))

HA - I didn't realize you have a post almost identical to mine re: how much January sucks!

Ok Hazel, now here is a response to your comment to the astronomy post; I am a bit confused today (I need to relax comes weekend for sure).;))
I agree with your sentiments about the universe, I think the same thoughts too.;)))