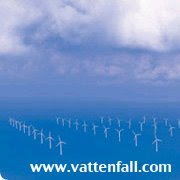 Outside the west coast of the Danish peninsula where I reside, lies "Horns Rev", one of the worlds largest off shore wind farms in the world. Completed in 2002, it consist of 80 wind turbines and is owned by Vattenfall. Although I have never seen it myself, I believe it to be an incredible sight.

Denmark is famous for it's windmills and the wind power produces about 20% of the country's electricity. In fact, the windmills are literally everywhere. On a clear day, I can see them lining up in the horizon when I look out of my living room window. Initially, they were considered ugly and a nuisance, destroying the appearance and the beauty of the landscape. However, today they are an integrated part of the country. In fact, Vestas, the largest wind turbine manufacturer in the world is located in Denmark.

The windmills here have even inspired the French composer of New Age synthpop, Jean Michel Jarre. In 2002, he performed a concert called "Aero - Tribute To The Wind" at a wind farm called Gammel Vrå Enge, located just outside Aalborg in Denmark, to an audience of approximately 50,000 people. His concerts are well known for their spectacular settings and unbelievable light shows.

The below photograph, taken by one of my friends on this day, is a clear testament to the fact that even large, modern, steel windmills can be alluring. 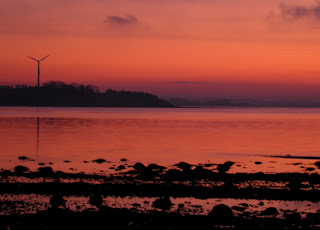 I admire Denmark for it's forward thinking and use of wind mills to produce energy--Denmark is famous for it and an inspiration. Where I live (Southestern New England coast) there is talk of following Denmark's example and harnessing the wind for energy the same way(it is flat here with a lot of coast line, as well) but there is also controversy about aesthetics, damage to sea and bird life and the fishing industry. I know it will only be a matter of time that we will have them, too. Now, I will have to go and check out the Jarre link.

Absolutely beautiful picture of the windmill in the sunset. I admire Denmark for its green efforts in helping the environment while producing energy. What a wonderful place to live!

I have always quite liked them. But I love the photography of Margaret Bourke-White, too, and she was famous for her industrial pictures :). I wish wind power would take off (though not to Oz ;) here.

I'm no Don Quixote, so I like the windmills and think they're cool!

Gal Friday, the Danes would be happy to hear you compliment their country in such a wonderful way.;)
There is an interesting site on the net showing the growth and the amount of the windmills in Denmark overtime. It starts with just a handful in the early eighties, with an explosive growth during the nineties. It is not just here, but all over Europe. Controversies still circulate though; I have been told, that a windmill cost so much to build and to erect, that will never produce sufficient amount of energy to even pay for itself. However, the energy it produces is clean, so I guess it is all (as with everything else) a matter of priorities.
Hope you enjoyed the Jarre clip.;))

Michelle, yes, Denmark is at times an overlooked country, I feel. Currently, despite many countries entering recession and struggling during the economical crises in the world, Denmark still has the strongest economy in Europe. The people here were voted the happiest in the world and I have to admit, that after living in many countries, I really love living here.;))

Diane, I am not familiar with her photographs, but I will be sure to check it out, sounds interesting. I think Vestas just made a deal with parts of the US to start supplying wind turbines, so I think your wish will come true.;))

Mel, that was a fun comment, as usual, you have a great sense of humour.;) Happy you like the wind mills; I think you would enjoy the site of 80 of them in the middle of the ocean, it is really cool.;)