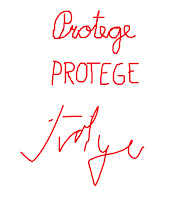 This morning I was at the post office to get a package. Yes, it was the result of my recent Saturday shopping.
Usually I have to sign for the parcel. With my signature, which keeps looking more odd the older I get. It is at this point unreadable and resembles just a mix of mindless doodling, than any known letters.

I am not sure exactly at what point my handwriting started to deteriorate. As a child, I was taught to write with a neat cursive handwriting, using an ink pen, also called fountain pen. I remember dipping the pen into the inkwell to begin with, but about two years into my school start, the pens became more modern and came "ready to be used" with ink cartridges. Every note book I remember using would contain a sheet of pink blotting paper, for removing the excess ink after writing.
When I was in 7th grade, the schools introduced the modern ballpoint pen, making our writing easier and neater. No more ink smudges in our note books. And slowly the presence of blotting paper disappeared as well .

When I was thirteen years old, my parents moved to Sweden. In school I realized that the handwriting of the Swedish children was different to mine. No one wrote in cursive style. They all wrote printed style, which was certainly odd to me. However, I tried to adapt in any way I could, so my writing changed slowly as well.
Today I still print when I write. I write all the letters as capital letters, imagine that. All caps, as if I was shouting!

To date the most beautiful handwriting I have ever seen is that of my Irishman. His letters to me are my most treasured possessions. He is an artist, not just when it comes to the writing style, but he has a way with words as well.

But back to the signature. My signature looks nothing like my name. In fact, it is unreadable, even by me. I recall a memory from my childhood, today with great amusement; I used to watch my mother sign letters and prescriptions (she was a pediatrician) and I kept asking her, if she used "the grown up style" writing. Not being able to read what she wrote and seeing that her handwriting looked nothing like mine, I believed that we all learned the "grown up" handwriting when we grew up.

Well, certainly, I did learn it; or at least the unreadable signature.
Posted by Zuzana at Friday, January 30, 2009

Believe it or not, in the early 1960's "Handwriting" was a subject taught in our primary schooling ( Grade 1-6). It was one of my favourite subjects and I always scored 80 and above for it. In my secondary schooling I pride myself in having a 'beautiful' handwriting in the English cursive or flow style. All this writing skills however vapourised when in the university halls I had to write notes quickly making them at times unreadable, probably akin to a 'doctor's handwriting', which I have not recovered since. But given the chance I still can write names on certificates or Visitors Book in the best of cursive style. As for signatures they are supposed to be difficult to read and copy in order to show that you are grown up. I have. Your post is very refreshing indeed and I enjoyed the links.

Another Blogger friend had a somewhat similar blog last week--lamenting the fact that few schools teach and/or emphasise the real "cursive" penmanship anymore. I had it drilled into me in school and always got high marks for my penmanship(sounds silly now). But, like you--my handwriting has deteriorated as I have gotten older. Or should we say--our style of writing has "evolved"? ;-)
I like the idea of you learning to write by dipping the pen into an ink bottle(we never learned that way--used the lowly pencil at first)

I used to have beautiful handwriting. But I think computers did it in. Now my signature is a big D and a big H, each followed by a somewhat straight line. Terrible.

I do think it's funny how you can identify where a person grew up by their handwriting. My mom used to say that all American kids' writing looked alike... I always say that most people in the UK have similar writing.

I know somebody that prints in all capitols when they are shouting! And when they are typing on the computer they add red ink to the words! ha-ha! My handwriting has gotten worse the older I get, too! Very interesting that you used fountain pens in school until 7th grade. We always used led pencils..big fat ones at first and then graduated up to the thin ones by 2nd grade.

Kids are so honest that my Isaac asked me one day why adults had such messy handwriting. It made me laugh.

I love that your Irish man has beautiful handwriting, and I LOVE that he still writes you honest to goodness pen and paper letters. In this age of email and IM's letter writing is almost a lost art. I am glad that you cherish his letters as they are such a romantic piece of who the two of you are together.

It really intrigues me that you had to learn to write with a fountain pen and ink bottle.

And,...I am not at all surprised that your mother was a pediatrician. Brains and the determination to use those brains seem to run in your family!

That little story about you and your grandma really made me smile. I love hearing about sweet moments like that.

I only got to use a fountain pen during my drafting class and I found it incredibly hard to use-- or maybe it was just me.

I also like the fact that you exchange letters with your Irishman! I think letter exchanges are a dying art. This is why Ive started exchanging letters with other bloggers-- just to make things more personal.. and who doesnt love receiving letters in their mailboxes?

--and your signature! you surely wont experience any sort of signature fraud! hehe..

=Mahmud, you being an artist, I am not surprised that you excelled in the "writing" subject in school.;)
And I so recognize that "fast" handwriting one had to acquire in the higher education.
You are right, I guess a signature had to be a bit difficult to read and weird looking in order not to be forged.
I always enjoy your comments.;)

=Tina, I agree with you and your blogger friend; it is odd how little demand is put on kids today when it comes to write properly.
I am happy you find it interesting that I wrote with an ink pen; I guess as it was in a communist country at that time, we were still a bit behind everyone else.;)

=Diane, there is something to what you say about the computers, as nowdays we type more than write.
I never thought about the fact that handwriting can identify where you come from, but I think you are right. As all Swedish kids did write the same way.;))

=Betsy, yes, I am trying not to type in capital letters on the computer.;))
Yes, as I grew up in the eastern block, over the years I realized that we were a bit delayed in many aspects, such as music, fashion and I guess, even technology. So I learned to write with ink pens.;) Instead of pencils.;)

=HOLLY, I guess Isac was wondering the same as I did when I was a child.;)
Yes, the Irishman still writes letters to me and I agree with you; it is so much more personal and romantic. I love his writing.
I learned to write with ink, as when I was a child in the eastern Europe, pencils were considered not adequate. It was more difficult, but on the other hand it made for some great memories.;)
Thank you for your kind words and compliments, but I honestly am not that smart.;))

=Valentine, yes receiving his letters definitely appeals to the romantic me! And I agree, it is a shame people only write emails these days. I am so happy to hear that you still write letters.;))
Ink pens were difficult to use, especially it was difficult not to smudge the writing.;)
I LOVE tags, so a BIG thank you! And I am honored about the award, I will pick it up promptly!
Thank you again - xoxo!

I only vaguely remember fountain pens. Though I owned a few, along with the nibs and ink bottles, we mostly used the cartridge fountain pens in elementary school and ball points in high school. What I loved about the cartridge inks was the Peacock Blue colour. I never used the dark blue or black - always that almost turquoise colour. To this day, it's still one of my favourites.

Hilary, we used only black ink, I am not sure any other was available at that time. I am sure though I too would have love an almost turquoise color.;))

A friend of mine who just went back to college and is about 29 was astonished when the 18 year olds in her English class couldn't read the cursive writing of the teacher. I guess they don't even teach cursive writing anymore in school, which seems bizarre to me! My signature is pretty much little more than a lumpy line now. Oh well, so much for all that practicing when I was a teenager thinking I'd be signing 900 books a day for all of my fans! ;)

Mel, you crack me, your are so funny! Well, you never know, there is still time to write a novel; never say never. I sure would read your books.;))

And yes indeed, it is odd that cursive style is so out these days; there is nothing more personal and revealing than handwriting. But as Diane said, it is all to do with the computers I guess; now days everyone just types on the keyboard.;)