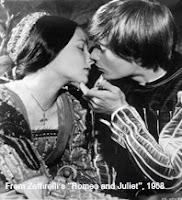 Recently I watched (again, for the millionth time) my favorite movie of all times: Franco Zeffirelli's Romeo and Juliet from 1968. He was the first director to be true to the classical tale by casting actors that were close to the age described in the epic Shakespeare story. Juliet was played by fifteen year old Olivia Hussey and Romeo by Leonard Whiting, who was seventeen years old. I saw it as a teenager for the first time, as it was part of our English curriculum. I was captivated from the start. To this day it remains an incredible masterpiece and to me the best adaptation of this tragic story, depicting love and foremost the bittersweet time of falling in love. It is superior in the casting, in directing, in regards to the visual effects, the costumes and the language. The director took a risk by casting two unexperienced, very young actors in the main roles, but it worked out wonderfully, giving the movie a sense of authenticity. Olivia Hussey, who is one of my favorite actresses, later enjoyed success on the big screen and TV screen. Among my favorites are "Ivanhoe" (1982) and the miniseries "Jesus of Nazareth" (1977).

I enjoyed that version as well. I love to see Shakespeare performed but reading it is torture for me. I always felt a bit stupid because I didn't get it but a friend of mine, who has a PhD in English and works for the Shakespeare Theatre near here, told me that he is the same way... he said it makes sense, though, as it's MEANT to experience and not simply read. I felt a lot better after that! :)

Diane, I only got some of the text after years of watching the movie.;) As the Shakespeare tale was part of our English lesson, the language was dissected by our teacher and we were forced to understand it. I am still at loss though with some of his other works, but they are nevertheless captivating.

That was a beautiful film. One of my favourite directors, Bruce Robinson, had the part of Benvolio, Romeo's friend. You might have seen him as the love interest in "Adele H".

Olivia Hussey was so lovely in that part. :)

I had no idea that he became a director! I always thought that Benvolio is an important character in the story; the grounded, kind and loyal friend that every hero needs. Just like Sam in The Lord of the Rings.