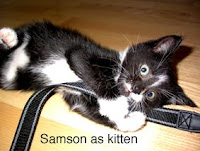 I live in a white washed, Spanish inspired brick house on top of a hill, with a breathtaking view of the city below. In fact, when arriving by car after the fall of darkness, it feels as if one is approaching the city by plane for landing. I have two roommates. One permanent resident, "the number one house cat". His name is Samson. Well, that was the name I gave him shortly after he arrived to live with me as a 9 week old kitten. He was so very tiny and I couldn't sleep for weeks worrying about him. He grew up to be a perfect companion, a very calm and smart cat, who waits for me at the door as soon as he hears my car pulling up in the driveway. But now the name Samson is not used that much, as he has been given the name "Batcat". 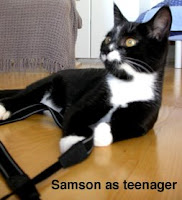 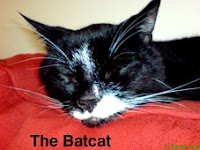 I have a 'roommate' like The Batcat... except he's a big, fuzzy, white dog named Sundance. He's most often called Bubby, though. When he was little, I didn't like to call him a 'bad boy' (though he was), so I'd call him a 'bubba' when he misbehaved (all the time). Bubby evolved from Bubba and because he was called that so often, he started to answer to it! He's lovely now, though, and rarely misbehaves. I can't imagine life without him.

Yes, life is so MUCH better with pets, isn't it? Your dog sounds very sweet and loving and I totally love his fun nick name and the story behind it.:)

Thank you Hazel, I do love him to bits!:)