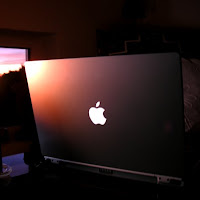 I think it must be wonderful to be a child today. All the technology around us, the access to computers, cellular phones, DVD's. Having the whole world at your fingertips and growing up with not even knowing otherwise. My first memory of seeing a computer was when I was about 15 years old. We had a computer room in school. The machines there were big and chunky and only the "nerdy" boys knew what they were all about or had any interest in them. I wouldn’t touch the things and was totally indifferent to this technology. My first experience of actually using a computer came much later, when I was at the university. I used it to type up one of my graduate projects and considered it more a typewriter than anything else. I don’t recall much, only that the screen was black, the text was orange and it was a DOS system (I think?). I remember those big "floppies", with a hole in the middle that we saved all our work onto. Ok, it seem I really did not know much, and I really did not. My first real interest in computers came much later, when I moved to the US: I got exposed to something new and beautiful. To the Macintosh from Apple. I knew what it was, as I have briefly seen a commercial for it in a cinema once. But never seen one in real life until then. And my life with computers was never the same from now on. My relationship with Apple started with a little black and white Macintosh Classic, which I soon updated to a Colored Classic II. I stayed true to the Apple throughout the 90s, when their market share was low, or non-existent and it was difficult to even get decent software at times. I owned both Macintosh LC and Mac IIsi until the advances of Internet and the very successful come back of Mac that started with the introduction of iMac and iBook, in all the psychedelic colors, in the late 90's. Today my laptop is my best friend and I sometimes have to remind myself how incredibly fast everything has changed, when I am sitting outside surfing the net via a wireless connection. If someone would have told me when I was 15 how important this small technological miracle would be to me one day, I would have never believed it.
Posted by Zuzana at Wednesday, September 24, 2008

Like you, I couldn't live without my computer, as it's my link to the people I love and the information I need... but the rest of technology? I think I could do without most of it. I wonder sometimes just how much we benefit from it and how it's affecting Ryan. Some of it, of course, is positive, but some of it... not so much. I often find myself wishing for simpler times :)

Yes, as with any progress, it has both positive and negative effects on us. Sometimes I feel it is a shame that I am going to miss out on everything in the technology that is yet to come in the future. But then again at times I think; perhaps I am better off not to know.;)

Ha - I remember DOS! Wow, I feel old. Mac has such a cult following now, it's amazing how well they are doing.

Hazel, I feel old at times too - I have no idea where did all those years go.;) And I just simply LOVE my Mac.:)