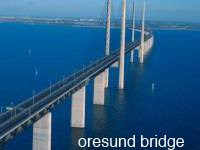 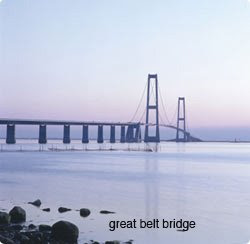 I reside in Denmark, but I was not born here. I grew up in Sweden, but I was not born there either. Until about a year ago my parents still lived in Sweden, and I used to drive all the way back to the southern part of the country to visit them. The 3 hour drive was quiet boring, except for two highlights. Crossing two colossal bridges. To those not familiar with the Danish geography, Denmark consists of over 400 named islands. The two largest one, Zealand and Funen are connected by a suspension bridge, so called "Great Belt Bridge", which is the 3d largest in the world. The link consist actually of a combination of a bridge and a tunnel. Likewise, in year 2000, Sweden was connected to Denmark when the "Oresund Bridge" was open to the public. This bridge is the worlds longest border crossing bridge, consisting of a combined bridge-tunnel as well. To travel across these structures is an experience I now greatly miss. It was never the same. Depending on the weather, one could have incredible views of the crashing ocean waves below when the skies were clear or feel as if suspended in the air, when the "sky" road was surrounded by fog. These are indeed genuine examples of outstanding craftmenship and superior modern engineering.
Posted by Zuzana at Friday, September 05, 2008