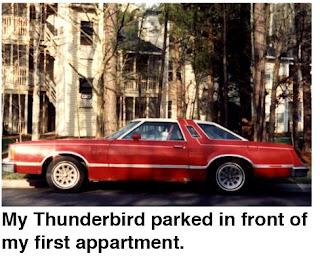 This weekend I was sorting through some old photographs and I found a picture of the car I drove the first two years of my stay in the US. A 77 Ford Thunderbird, bright red with white leather seats. I got to borrow it from my good friends. I couldn't sleep the night before I was to drive it for the first time. I have had my driving license at that time for barely a year, during which I was not driving at all and on top of everything, I was used to drive small cars in Europe. This one was huge and scary. But it became quickly my very best friend, a friend with a personality and attitude. It was a true art to manage parking it. The seat belts did not work, the windshield washers only sometimes, and if you slowed down below a certain speed, the car engine would quit and the car could no longer be controlled as the steering wheel was locked. I once got stuck this way in an intersection and almost hit a lamppost. In the end I had to refill the oil every week and finally I realized it was time to trade it for a newer model. But man, no one but me sitting in the Thunderbird could leave the modern cars behind in the dust when the traffic lights turned green! I barely touched the gas pedal and it flew on its way! I recall how strange it was to have the transmission at the wheel and the hand brake and long beam lights were activated by pedals in the floor. It had no air-condition, which was a very trying obstacle to overcome in the very hot and humid summers of the southeast. But I managed to drive it safely for almost two years and even made a long trip to Florida before it was retired back to my friends driveway for good.
Posted by Zuzana at Tuesday, September 16, 2008

Oh, the memories that photo generates! One of my best school friends drove a T-bird like that one, but it was white. It had been her mother's car and when she got a new one, my friend inherited the 'White Whale'. That car took us everywhere. She eventually traded it in for cute little sporty car that was definitely more 'us', but the T-bird will always be remembered fondly :)

Diane, the word "whale" is very appropriate! Glad that you can share this experience, I will remember this car as long as I live.

What a wonderful post about this unforgettable car. Love the red and white!

Yes, it truly was an unforgettable car.:)))