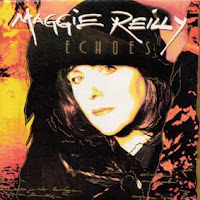 I think everyone my age remembers "Moonlight Shadow", one of the big hits of the 80's, composed and performed by Mike Oldfield. It featured furthermore the unforgettable voice of Maggie Reilly, who performed the vocals of the song in 1983.

Although she is best known for her collaborations with Oldfield between year 1980 and 1984, she was also in the pub-rock group Cado Belle, and made one album with them in 1976.

In 1992, Reilly released her debut solo album Echoes, from which the below compilation entitled "Everytime We Touch" is taken. The sound is very enticing and almost ethereal. Her voice is soothing and full of longing and if I close my eyes, the lyrics and the harmonies can take me anywhere in space and time.
One of my all time favorite compilation to dream myself away to...

I love 80's music. Much to Hubby's chagrin i download a ton of it from itunes. :)

Oh that was a real treat Protege, haven't heard that song for a long while. It will be in my head all day now!!

Love the weird facts too!

Have a great weekend. Jeanne x

been a while since i have heard that...familiar, it haunts the edge of memory. have a great weekend!

I'm at work and I have no sound...will check this out later when I get home...I'm sure it will make me smile! Have a fantastic weekend. I'm going to my friends annual Halloween Bash so I plan to have a fun weekend...:D

Ahhhh...I knew the title sounded familiar! This is, again, another case of "I heard it in its dance version" with German group Cascada. And my thought again: can't today's groups come up with new, inspiring pieces of their own?!
Have a great weekend Zuzana!

This is a so lovely song. I like your taste. Have a great weekend!

Lovely...I do flashback Fridays too, so funny!

It's all about the 80's today. Just read another blog and I transcribe from my 1989 journal, to be posted soon.

Been a long time since I've heard this song.

Just catching up, I've been on deadline...
Thanks for the memory here...
I enjoyed you list of facts below. It would be fun to test out the a duck's quack not echoing, though...
-Jayne

This American had never heard of this song--very 80's Euro, sort of ABBA sound to my ears.
So many forgetten songs/one hit wonders from years past to reconnect us to that moment in time, aren't there?
Every once in a while, either my husband or I will get nostalgic and we'll go through our old records(as in LP's! imagine that!).

=Cairo,
I agree, 80's music was the absolutely best. Or was it just because we were young?;)
xo

=Jeanne,
glad you remember and like this piece.;) Have a lovely weekend as well.;)
xo

=Nessa,
thank you so much, glad you enjoyed it.;)

=Brian,
I know, some things we do recognize, but not really know.;) Have a lovely weekend as well.;)

=Claudia,
you have a great ear; so true, Cascada made a remake.;) I am going to post very soon yet another original, that was remade a few years back: I am so excited to see if you recognize it.;)
Have a wonderful weekend.;)
xo

=Phillip,
thank you and likewise.;)

=stacey,
how extraordinary we use the same theme.;) Even though the content differs.;)
Hope your weekend is lovely.;)
xo

=sprinkles,
time sure flies, right?;) Hope you are having a lovely weekend.;)
xo

=Betsy,
so glad you do, those words are so poignant too...
Have a lovely weekend.;)
xo

=Jayne,
so glad to see you back; I so get the deadlines.;)
Happy to hear you enjoyed your visit here.;)xo

=Tina,
I guess the music scene differs somewhat between continents. Most of the 90's European hits are lost on me as in the US quiet different acts would be popular in that decade.
I love the fact that you through your old LPs.;) So cosy.;)
Hope you are having a lovely weekend.;)
xo

=Hilary,
I feel like that about the 90's and will one day about today's music.;) I hope at least you get to know about some of the compilations through this theme.;)
Always happy when you visit.;) xo

I'm doing some catching up today. I have had so many disturbances and holiday weekends to cope with that I've been mssing my favourite blogs. I wanted so much to enjoy that Flashback Friday featuring Vicky Leandros (L'Amour est Bleu) so I listened to that today. And she was one of my late father's favourite singers, he adored her Eurovision son of 1972, Come What May (Apres Toi). After 'L'Amour Est Bleu' I listened to my Dad's favourite song and I really went down memory lane and shed a few tears. My dad died in 1977. Thanks for bringing that back into my life,

=gaelikaa,
what a touching and kind comment. I am so happy that you found a bit of nostalgia in the music I shared. It is always difficult when ones parents pass and they will stay forever in our hearts. The thought of them stirs a multitude of feelings in us at all times.
Thank you for taking the time to read all my posts, it means more to me than I can express.
xoxo