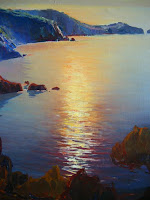 I own two paintings that come from the same artist. As with any work of art, I often wonder about this man (or a woman), that placed the brush strokes over the canvases, creating two tranquil landscapes. They seem to be both inspired by a coastline in a warm climate, judging from the composition.

I have placed both paintings on the large south wall of my living room. In spring, summer and early autumn, the setting sun slowly casts its rays upon the canvases, first one, then the other. The warm light amplifies the colours, adding to the perception of the actual sunrise or sunset depicted within the landscape. It is an unusual, almost a magical sight.

Both are absolutely beautiful artworks in my eyes. The way the artist manged to capture the colours of the rocks and the sea, the reflection of the sun in its surface and the meeting of the land and the ocean and the white foam of the surf, is uncanny.
These magnificent pieces were given to me as a gift by my parents. Obtained in a shop that dealt with reselling of artwork, the sellers claimed the artist to be known and the works considered to be of a certain value.

To be honest, the only value these hold for me is a sentimental one. I genuinely love the style, the concept and the motifs. However, I still wonder who the artist is or was and where and when these artworks were created. The signature is difficult to read and makes no sense to me. I have tried to search the net on names that the letters might represent, but no luck.

Does any of you have a suggestion of what the name is of the artist that signed these paintings?
(Please click the below image to enlarge.)

The value of a gift is supreme and when it comes from parents it becomes priceless.
The paintings are indeed beautiful. I wonder what the sizes of those canvases are. I have a feeling that the artist is around and still painting and those were some of the early works.
I am not sure if the signature is of the real name or it is an adopted one. If you will notice you will find that the two signatures are distinctly different, both the individual letters and base line.
I hope you will find out soon enough!

How lucky you are to have beautiful original works of art hanging in your home that you love. The mystery of the artist is intriguing. The signature looks like Panijohn to me or maybe Panijuan.

I hope you can discover who the artist is! Really beautiful.

These are very beautiful. I do hope you're able to figure out who the artist is. I love art. I always love knowing who painted a particular piece of artwork.

Precious gifts. I don't know how you can find the artist but I keep my ears open for ways of finding such information.

Those are indeed lovely. I can see how they would come alive when the sunlight hits them. I tried Googling a number of different combinations of what I perceive the signature to be but came up blank. I hope someone can figure it out for you. :)

both of them are really beautiful and bring smiles to my face. i have no clue myself but happy hunting!

Beautiful; do you have a date?

How beautiful they are. How fortunate are you to be the owner, if one can actually own such beauty as this. I have no clue on the artist's signature, but I do hope that you will soon have your answer. He or she deserves to have their name spoken aloud.
Sandi

They’re both beautiful pieces of art, but I have to wonder if it’s the same artist. I agree with ‘Sumandebray’. The ‘P’ is different, also the middle character (letter) in the painting on the left swirls to the left, while it looks like a ‘Y’ in the painting on the right. Whoever the artist/artists really are doesn’t matter, the fact that they give you ‘enjoyment’ is what counts.

I cannot venture a guess but find them to be quite beautiful!

Lovely, especially the one on the right. Thanks for sharing with us.

And Dear Z, I so appreciate the recent comments you left at my blog. I've been away from reading my friends' blogs recently. I'm going to catch up here now!

=Sumandebray,
you are right, perhaps one is an earlier work and one a later work The artist must be the same due to the style and the uncanny similarity in the signature.;) Thank you for taking the time to help.;)

=stevie,
thank you and thank you for the suggestions. I did some search on the names but nothing, but i think you are close. Pani might be the surname, that is a new idea I did not contemplate before.;) xo

=Keith,
thank you, I do love art myself and I love to paint as well.;)

=Joanne,
thank you, I hope I will one day solve this mystery that has been bothering me for years now.;)xo

=Hilary,
glad you too enjoy these.;) And thank you so much for trying to search the net, I appreciate that dear friend.,) xo

=Brian,
thank you. Always happy to make someone smile.;)

=Helen,
no unfortunately, no date.;) Thank you for stopping by.:)xo

=Sandi,
thank you for that kind comment and so right you are.;) xo

=Scribe816,
thank you for investigating the name. You are right, there is a distinction between the two, but I think it might be just the artist getting older.;) I always enjoy when you stop by.:)

=sallymandy,
that is my favorite too.,) And you are very welcome, I love my visits to your very contemplative place.;)xo

I love the way you see these.

Congrats on POTW mention at Hilary's!

I've forged an attachment with a couple of pieces of art and have similarly wondered about their creators.

I hope you find out about yours. It would be terrific for him/her to find out how much their work is appreciated.

(I wandered over here via Hilary's mention.)

I have no idea who the artist was but he/she really captured great beauty in them.
Congratulations on being mentioned on Hilary's POTW.

I love the colors and brush strokes on the paintings. Couldn't find any matching names.

=The Things We Carried,
(what an interesting name:), thank you so much for stopping by and for your kind words.;)

=Frank,
I know you well from Hilary's post.;) Thank you so much for stopping by, I appreciate it very much. I too hope I will find out who this mysterious and talented artist is.;)

=Magie May,
thank you, it was very kind of you to stop by.;)

=Nessa,
I am happy you too enjoy the paintings, thank you for your help and for stopping by.:)

=gaelikaa,
thank you so much;) xo