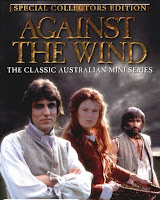 I was thirteen years old when I arrived in Sweden with my parents and my sister as an immigrant. It was a big change and a difficult time for our whole family, but it was also a very exciting time as well.

I do not remember much of the first few months, but one thing stands out very well. A song. Or a compilation, if you will.

I recall sitting in my aunts living room, watching a heartfelt story unfold every week on television, trying to make sense of the images. Trying to take in the English language which we did not understand and the Swedish subtitles in the bottom of the screen, which we were only starting to comprehend.
Well, perhaps I did not always grasp the details of every scene, but I understood that the destiny of those depicted within resembled somewhat my own.

The main soundtrack stayed with me, in my mind, without a title as that eluded me at such a young age, but the harmonies were there, even though forgotten for almost thirty years. Stored on the dusty book shelves of my mind, until my Irishman brought them back one day in our conversations and elucidated the origins and the title of the story that took place on a television screen, ages ago in my past.
Entitled "Six Ribbons", it is the theme song from the Australian series "Against The Wind", starring the enigmatic Jon English, who is also the performer of this poignant song, which climbed the charts in the early 80's.

It is an incredible feeling to make re-acquaintance with something we considered lost, but which we find again perhaps by coincidence. Or perhaps because we were meant to, as the meaning within will speak to us in a new way.

It's amazing how a song can take us back to a particular moment in time. I'm glad you were able to reclaim this lost memory. :)

Never heard the song before but to me it has a celtic flavour to it. Really nice.

Have a wonderful weekend.

I know the feeling of loving something you read or saw when you were younger, but not knowing the name anymore. I was so happy when I saw a production of the Secret Garden because I knew immediately that it was the book that I had loved when I read it as a child, but had no idea of the name of it any longer. It was like finding a lost friend.

I know that feeling you have described here,
of a piece of music or an image that can take you back years to a certain period(or even moment)in your past--like you can almost taste it!
I have never heard of this movie/programme but it looks like something I would love to see now.
Also...I like it a lot when you describe what it was like when you began a new life in Sweden(and now I know how you became so good at languages..!)

...to *StevieWren*(above):
My third grade teacher read "The Secet Garden" aloud to our class and it made such a huge impression on me and it remains one of my favorite books. So glad to hear you eventually reconnected to it through viewing the movie version. :-)

It is fun to look back. Certain things are so evocative of the past.

It is a wonderful song and the images in the video are gorgeous. A real treat.

Elizabeth's comment mirrors my own about the Celtic feel to this great song. Yes, isn't it amazing to find a sheaf of paper or a photograph and then re-experience the feeling you had when you last saw it. What a nice post, Protege! :)

Yes, I am moving. Not vacationing. I am going to my miss my hometown and state.... but let's see what comes our way with this brand new adventure?

Blogging will remain the same :) just in new photo ops. ;)

really a wonderful song...and the sentiment in your last paragraph speaks volumes. hope you have a great weekend friend.

Very nice! I can't imagine moving to a different country with it's cultures and language and starting fresh like that! What a wonderful, rich life it adds to!

Never heard of the song or the series before. I love to see or hear something forgotten from my childhood and have those memories come rushing back!

That was a transitory time for you so the memory is a special one. It's great to have a song to stir it up!

I've heard the song before or it may just be familiar; I'm thinking Simon & Garfunkel and Emerson, Lake & Palmer, both of which bring such a rush of memories. Thank you.

Oh my goodness Protege I've missed 6 posts! As ever, such good reads, each and every one like a self-contained story with interesting facts and reflections on the world. I loved Autumn Leaves and Silver Disc. I don't remember ever seeing this programme or hearing the song but what memories for you in experiencing such a life-changing move at 13 years old. And learning two new languages so well!

Have a great weekend. Jeanne x

Pretty song.. it's always nice to rediscover a sounds, sight, smell.. memory from the past.

But you had me fooled again! I was sure when I saw the first image that it was going to be Seger's Against the Wind. :)

Although I only vaguely remember the TV series the song was instantly recognizable. It's funny but your description of arriving in Sweden as immigrants reminded me of another TV series we used to have here called "Little House on the Prairie". Ironically it was about a Swedish immigrant family settling in the United States. I can almost imagine you and your sister as the two little girls in that series!

That video and song were so beautiful. They stirred a longing somewhere deep within me... I think it was the Irish in me. I am Irish from one side, German from the other - romantic and practical; and of course, 100% American to tie them neatly together. I can't even imagine going to a new land with a new language and culture the way you did. I am sure that had a lot to do in shaping who you are. But it can't of been easy, and must have been very melancholy at times.

Have you seen
The Incredible Journey of Mary Bryant (2005)
It might not be like this one at all, but it is a mini series about a girl sent to an Australian penal colony. We got it from Netflix.

ok,...that music really spoke to me! I can't believe that I have never heard it before. It has a sort of Simon and Garfuncle feel to me with a bit of Celtic twist. Love It!!

=Cairo,
so right you are; scent ad melodies both have that effect.;) Hope you are having a lovely weekend.;)xo

=Elizabeth,
you are perceptive: as the series deals with Irish immigrants, the Celtic influence is clearly there. So glad hat you stopped by.;)

=stevie,
that is it; the incredible stream of memories and feelings that come back.;) Whether it is a book, movie or a song.;) xo

=Tina,
yes, we are on the same frequency here. I love to rediscover old memories that seem lost or at least buried for a while.:) I am so flattered that you find my childhood stories interesting.;)xo

=Nessa,
that is absolutely true. Thank you for stopping by.;)

=Jill,
so glad you like this; the imagery from the Irish landscape are stunning I think.;) xo

=Michael,
thank you very much for your kind words.;) I too think that this lovey song is so well complemented by the lovely images.;)

=Erika,
I can not believe you are leaving your sunny and warm home; so no more Palm Trees I guess.;)
In any way, good luck on your new venture; every change is scary but it makes us grow.;) xo

=Brian,
thank you, I am glad you understand my thoughts.;) I hope your weekend is likewise wonderful.;)

=Betsy,
it was very exiting for us, the kids,, I guess it was more of a struggle for our parents.;) Glad you liked the song.;) xo

=sprinkles,
yes, that is a wonderful way of remembering what once was. Always glad when you stop by.;) xo

=gaelikaa,
that is absolutely true; it was a time of a big transition.;) I hope you are having a wonderful weekend.;)xo

=Helen,
yes, the style is very similar, so right you are; soft and poignant.;) Hope you are feeling better by now.;) xo

=Jeanne,
ah, you always leave the kindest comments. Yes, it was a big change in our young lives, but it was a foundation for who we are today. Glad I could introduce you to the enigmatic voice of Jon English.;) xo

=Hilary,
now Bob Seger is a accomplished artist in his own right an "Against The Wind" is a wonderful tune.;) I have been contemplating to post it in the future.;) Hope you are having a great weekend my friend.;)xo

=Blogaire,
I thought you might be familiar with this poignant song.
Yes, I know of the Little House, we used to watch it when we arrived in Sweden. It is a well known show.;)

=Rosezilla,
thank you for your very kind and poignant words; you beautifully described the reality as it was for us and what it meant for us as well. I am delighted that you felt the power of the song as it truly carries significance. I know of the mini series you mention, though I have never seen it, but it has been shown here.;)xo

=Holly,
so glad you liked this little piece. Everything you say is true, there is a Celtic influence.;) I hope you have a wonderful weekend dear fried.;) xo

Sounds very Irish! and very...tranquil? peaceful? it's a very soft song. Surely this song along bring hundreds of memories, not only about the weekly series, but about that time of your life. How interesting!
Again...a bit late. Sorry!

Claudia,
yes, this song has Irish influences as the series is about Irish immigrants.;) Glad you liked it my dear friend.;)
xo