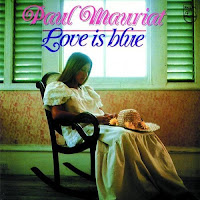 "L'amour est bleu" was composed by André Popp and written by Pierre Cour. In 1967 it was performed by Vicky Leandros as the Luxembourgian entry in the Eurovision Song Contest. (The original enthralling, almost vulnerable performance can be found here).

I was born that year and even though I can not claim to remember the song as a hit, I am familiar with the later remakes of this fragile, melancholic piece, most notably the Paul Mauriat instrumental version from 1968. I knew of it for decades, but became completely infatuated with the compilation in the 90's, when I bought an album with a collection of the most romantic instrumental pieces entitled "Love is Blue", by Paul Mauriat and His Orchestra.

There are very few instrumental melodies that appeal to me, but this one envelopes my heart every time. Riddled with musical intervals that are so significant of the 60's, it nevertheless sounds ever so timeless, fitting adequately in any decade due to its reference. There is something infinitely delicate about the harmony, full of unrequited longing, hiding a certain kind of sorrow. But then again, that is the intention of this lovely musical gem I guess; to convey the endless power of love and the bittersweet sensation that this universal emotion leaves us with at all times...

I close my eyes and listen to the instrumental version and I'm 14 once more. I love this song. I even had the sheet music and could play it on the piano. You've transported me back to my youth this morning.

You and I are on the same page. Music has the power to motivate, tranquilize and inspire us. It can also trigger memories from the past, some pleasant and others not so pleasant. I like the video you chose from YouTube. The blue filter of the misty water is a perfect match for the emotion of the song. Have a great weekend ;-)

As Deni Bonet of "Last Girl on Earth" fame says, "Why wallow in misery when music has the power to help us rise above out trivial concerns". I recognized this song in the first two bars. Very nice touch to share with us, Protege! :) Have a nice Friday!

This is the song that forever captivated my heart since the late 1960's and I still keep the vinyl record of it by the same title"Love is Blue- Paul Mauriat and His Orchestra" with other songs included like EuroMarch,Penny Lane, This is My Song, There's a Kind of Hush, etc.This song is extremely meaningful to me because it reminded me of my youth when every time I felt like relaxing my mind and wanting to go away to some distant places I would play the song on the gramophone.It's always gave me that instant escape each time I close my eyes and listen to Paul Mauriat's version. Over the years I learnt to memorize the song and play and sing it on the guitar. Thanks for enlivening my Saturday. Have a lovely weekend.( Feel like plucking my guitar again, later)

How can I forget "L'amour est bleu" by Vicky Leandros, and excellent Greek singer!! The music is super. Excellent taste and choise! Thanks.

This is the first time I've heard it and it really is lovely. Thanks for sharing. x

=stevie,
ah, so happy to have brought back some lovely and sentimental memories.;)
xoxo

=Scribe816,
you are completely right, I could not have put it better myself. I simply can not imagine life without music...

=Michael,
glad you to recognize this beautiful piece. Love the quote.;)

=Mahmud,
I so understand what you mean by saying that you used to close your eyes while listening to music and traveled in your mind, dreaming yourself away. I did (still do) the same.:))Great comment.;)

=Brian,
glad you loved this too.;) Have a great weekend as well.;)

=Helen,
I am happy I could introduce you to a classic.;) Always happy when you stop by.;)xo

There are songs that you are familiar with, yet have no idea what's their title, who sings it, and where it comes from. This is one of them! A typical piece of those Beautiful Music radio stations I was talking about in one of my entries. I KNOW I will never forget where it comes from now!, and will forever know its title. Thank you so much!

It reminds me of my dad actually...I'm figuring that right now. One of those mind-triggering moments.

=Claudia,
so glad you like and recognize the piece.;) I know what you mean by suddenly realizing the origins of a familiar compilation. I love that feeling too. Glad I could elucidate the title of this beautiful melody for you.;))

An absolute favourite from my early teens. I had the 45. My mother had the sheet music. Like you said, it's still a classic. Thanks for this nostalgic post. :)

=Hilary,
I knew given some time, I will share something we both enjoy.;)) Glad this brought back some sweet nostalgy.;) xo

Oh, good heavens! I haven't heard that song for so long. All at once I'm a tiny girl, hearing it on my sister's record player. I think the song must have reached our little hamlet later than 1967. I loved seeing it here on Youtube in the original French.

=sallymandy,
isn't it just great to get reminded of something long gone? I love this piece, glad you do too.;) xo