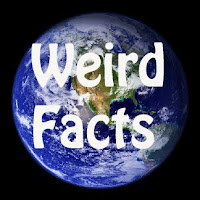 I am always intrigued by the mystical, the unusual and enticed by the enigmatic. I also enjoy reading about the weird facts of the world we live in. And guess what, the web is full of charts listing the odd.

Here are a few facts that captured my interest. Whether they are true or not is anyone's guess, but they make for a fun read:

*Elephants are the only animals that can't jump.
*Women blink nearly twice as much as men.
*Every time you lick a stamp, you're consuming 1/10 of a calorie.
*Skepticisms is the longest word that alternates hands when typing.
*The Earth weighs around 6,588,000,000,000,000,000,000,000 tons.
*Thomas Edison, light bulb inventor, was afraid of the dark.
*A dragonfly has a lifespan of twenty-four hours.
*A duck's quack doesn't echo. No one knows why.
*A rat can last longer without water than a camel.
*An ostrich's eye is bigger than it's brain.
*Compact discs read from the inside to the outside edge, the reverse of how a record works.
*Crickets hear through their knees.
*Our eyes are always the same size from birth, but our nose and ears
never stop growing.
*All polar bears are left handed.
*Debra Winger was the voice of E.T.
*From the age of thirty, humans gradually begin to shrink in size.
*It's impossible to sneeze with your eyes open.
*Leonardo Da Vinci invented the scissors.
*Only female mosquitoes bite.
*Race car is a palindrome.
*The average person falls asleep in seven minutes.
*There are no clocks in Las Vegas casinos.
*There is a city called Rome on every continent.
*There is about 200 times more gold in the world’s oceans, than has been mined in our entire history.
*A 'jiffy' is an actual unit of time for 1/100th of a second.
Posted by Zuzana at Thursday, October 15, 2009

Oh I don't like that rat fact, I've just spotted one in the garden again! The others were good though!

Thank you for sharing these facts, all of which I never knew...until now. :-)
The duck's quack with no echo(? really?) is one that will bother me for days. I'll be listening to them more intently when I walk to the river with the dog this morning, too..

Imagine the seismic shock there would be if a herd of elephants jumped at the same time. It's a good thing they can't.

Wow, I feel infinitely informed. Thank you for sharing...who knew about racecar before? Well, you did obviously...
Sandi

Wow. Those are really cool. I don't think I knew really any of those facts, except for just a few. Thanks for sharing these with us. Very awesome. Cheers!

Just so glad that you told me so. LOL

LOVE these!!! LOVE them!!!
Thank you for starting my day in an educational way!

Debra Winger is ET?! I did not know that!, and not that I have seen the movie. It scared me as a little girl, and though I'm sure it's completely innocent, I haven't seen it as an adult.

And that thing much calories from licking a stamp?!...good thing I have a little water for that "task" always ;-)

These were fun! I love "useless facts" even though I can never remember them. I guess I'm not average. I often take hours to fall asleep, not 7 minutes. And even though I am (well) over 30, I don't appear to be shrinking. Although I have lost 15 pounds recently... perhaps it just took a little longer to kick in, lol.

This is so cool. I never knew that about Thomas Edison or Debra Winger. We don't see that much of her these days! I knew that Edison had many,many failures before he succeeded at inventing the light bulb. Cool post, Protege!

I had no idea about the rats or that Debra Winger ws the voice of ET...interesting.

Great facts...I wish I could fall asleep in 7 minutes!

My father is full of useless information so I already knew some of these. Not all of them though. Thanks for sharing!

I guess somebody had some extra time to play on the computer today. You left out one...*More people post comments on Protege's BLOG than any other I've read.

Oh wow....the only one I'd ever heard before is the one about the female mosquitos!

am back! and i miss your blog the most.

anyway wow! elephants can't jump?
good thing i don't send snail mail now. No wonder am overweight when i was in college. hehehehe!

Those were fun, thanks for sharing.

=Joanne,
hope you will get it soon.;)
xo

=Cairo,
glad you enjoyed it and hehe to the last part.;) Great sense of humour.;) xo

=Tina,
the only one O knew was about mosquitoes and the CD.;) I also found the Debra-ET fact amazing. Let me know what you find out about the duck quack echo.;)
xo

=Brian,
I second that completely.;))

=Sandi,
yes, what an interesting palindrome. But honestly, not even I did know.;) xo

=Elizabeth,
I am happy you found this fun.;) Hope you are having a lovely weekend.;) xo

=Julie,
so happy you do.;) Your visits are always very appreciated.;)

=Claudia,
yes, that fact was surprising to me as well.;) And I do as you use a sponge for the stamp so at least I am cutting those calories, LOL.;)
xoxo

=Nessa,
how interesting, never knew that.;) Thanks for stopping by.;)
xo

=CatLady,
welcome and happy you liked this.;) Please come back again.;)

=Rosezilla,
yes, I guess those 7 minutes apply to those with really calm personalities and good nerves.;)
xoxo

=Michael,
so happy when you stop by and glad you enjoyed these weird facts.;)

=stacey,
yes those two were new to me as well.;) xo

=sprinkles,
your father must be very interesting to talk to.;) I am happy you enjoyed this.;) xo

=Scribe816,
hehe, you are so funny.;) I only wish that was true though.;) Your kind comments always warm my heart.;)

=Denise,
so glad you are back.;) Thank you for that kind comment.;) Always happy when you visit.;) xo