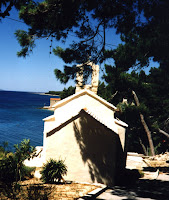 Yes, that is what happens to me in the midst of winter. I like to think about the coming summer. I like to daydream about possible trips I can take or just like to imagine, that in a few months, around this time (while I am typing this), it will still be light outside. Not pitch dark and cold, with the expectation of an imminent snowstorm.
No, it will almost feel like the middle of the day, although it is evening, and there will be another 5 hours of sun at least. This will happen during the period of the Scandinavian white nights.

When I was teenager, our family used to plan vacations during this time of the year. As we are not native to the cold North, the summer vacation would always be planned to be spend in southern Europe. Summers in Scandinavia are short and very unstable. Most Scandinavians, if they truly want to be sure no to get rained on during their time off, travel abroad.
In my youth it was very popular to take charter trips around the Mediterranean. Italy, Spain and Greece, plus all the islands were very popular and I guess, still are. Even though in recent years, more exotic destinations such as Thailand, Bali, Maldives and The Caribbean are much more in fashion.

The best vacations I took with my family were however when we drove. We would travel by car down to Spain or former Yugoslavia. It was in the 80's, long before the Euro currency and before the borders between the EC countries were freely open. Long before the Super bridges connected Sweden through Denmark to the continent. It was at the time, when the mainland Europe was still only accessible by ferries to most Scandinavians. When borders with passport controls still separated every European country. When entering every new state still meant new currency, new language and a new climate. It could take days before we reached our destinations, which allowed for a more a natural adaptation to the warmer weather. This is not possible when traveling by plane. Just the actual trip was exciting, as passing all those different countries on the way was so very exotic to us.
Even though there is a lot of good to say about the new, united Europe, there is also some sort of magic that has gone lost.

Memories of these trips still warm my heart and to this day driving is my preferred way to travel. Those vacations of my youth were not fancy in any way. In fact, the accommodations were always very humble with no luxury. To us merely being together was enough. Each trip was a promise of a new adventure. Always filled with relaxation on pristine beaches and with the excitement brought on by new, often unexpected experiences.
Posted by Zuzana at Tuesday, February 03, 2009

Ah, I remember it all very well. I know exactly what you are talking about. Dream on, summer will soon be here again!

I have fond memories of family vacations, too, from when I was young! Good times. Stay warm today!

I liked our driving vacations, too (of course, those were the ONLY vacations we took!), but driving to Gettysburg versus driving to Spain... hmmmm... doesn't have quite the same ring, huh? ;)

Oh sweet Protege,...you can have some of my summer. (My hot, sticky, never-ending summer.) I guess it's all relative and I shouldn't complain. But honestly, I wish you could just hop a plane and come visit for a while. I would take you to see the local horses.

THANK YOU very much for the award!! It is so fun to have new chochkies for my side bar:). You are far too nice to me.

And I don't think that this is necessarily a good thing, but my midieval profession is a Jester. :)

I LOVED your lazy Saturday pictures!!

Color is the best accent to any weardrobe. And thanks for the comments and for following me as well! =]

Ah, memories of childhood holidays are a daydream all their own. The nostalgia of a time when everything felt perfect.. and safe.. and summerish. I miss the season too. These arms will be wide open awaiting its return.

Family holiday trips are treasured moments especially when the kids were very young. Come to think of it I am so happy that I could afford a few of them to Singapore, Penang, Langkawi with my kids when they were so very young and eager. Ah, about summer. It's summer all year round here.

Summer is our favorite too. My family likes to travel from North to South (10 to 17 hrs by land) to enjoy beautiful destinations most especially beaches. Every month of last year was spent on different islands and beaches. And just two days ago I was at the beach again with my family. :)

Your family trips are more exciting! You get to drove all the way to Europe and experience different countries on the way. That must be an unforgettable trip! I'm sure it was an amazing experience.

Nothing beats family vacations. These are the happiest memories and adventures I treasure in my heart forever. :)

=swenglishexpat; great to hear that you recognize and can identity with my memories. Always nice when a fellow Scandinavian stops by.;))

=Betsy, yes, my fondest memories involve always my family; close and extended. Always happy when you stop by.;)

=Diane, I am always so impressed with the trips you take with Ryan; all the camping you do. I think that measures up well with driving to Spain.))

=fashion chalet, I LOVE oversized jewelry; the bigger the better. I look forward to follow your blog as I am interested in fashion and I like to keep up with what is hip and in.;)) I think you will keep me "feeling" young.;)

=Holly, please do not ask me too many times or I will hop on a plane (despite my fear of flying;). As I said, I remember the part of the US where you live VERY fondly. Please send me some sunshine. And I like sticky hot summers.;))
You deserve the award, I am happy you accept it.;))
Thank you for all your kind compliments, you know they mean so much to me.;)

=Hilary, that is so correct, I love the way you describe the sentiments we feel about our youth. I always remember it with a pinch of melancholy; but I take comfort in the fact that my memories can take me back anytime.;))

=Mahmud, I always enjoy to hear your take on things. What exotic places to travel to! Although I love spending time at home, I also enjoy traveling; as they say: those who stay at home only read the first page of a good book.;)
I envy you your "all year" summer greatly.;))

=Sweet Noelle, to me your driving vacation sounds exciting; it is always that way; far away places are so exotic to us.
How wonderful to be able to be at the beach now.;) And yes I recall the nice pictures you posted.;))
I agree completely; time spend with family is the most precious one ever.;))

I, too, am dreaming of summer. I love a road trip, even if it's just for the day.