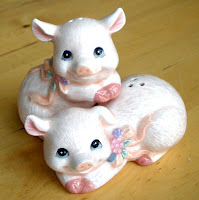 This weekend I was looking for a particulate Christmas ornament and I found a “salt and pepper” shakers set in one of my cabinet drawers. Well, I did not find it, as I knew it was there, but seeing it again brought back sentimental memories.

I was 24 years old when I set on a journey that took me not just away from my family and friends, but also my hometown, the country I grew up in and – away from Europe. I left the continent I called home and relocated to America. I do not think I was really aware of what I have done until the TWA plane landed in JFK airport on a cold January afternoon. I felt a bit lost. I remember clearly how alone I felt, when I tried to buy a soft drink at the airport with $50 bill. The guy at the stand stared at me suspiciously and finally handed me the bill back rudely and said that he only takes one-dollar bills. I said that $50 bills were all I had, as that is what the (stupid) bank gave me when I exchanged my currency in Europe.
My last salary I ever received in Sweden came to $300 and that was given to me in $50 bills. My plan was to live on this amount for the first few months after my arrival in North Carolina. Yes, that is what I thought. I think that money was all spend immediately as a deposit on setting up a bank account. But that is another story entirely. In any case, I had to go thirsty.

I was completely exhausted when the turbo prop I traveled on from NYC finally landed in Raleigh airport, where my new employer, who I never met and whom I only talked to on the phone a couple of times, picked me up.
In the morning the next day when I woke up in a hotel room I finally broke down when I unwrapped the last gift given to me by my mother; two cute pigs, making up a salt and a pepper shakers set.

In some odd way they remain to this day a symbol of the notion that life is what we make it. The meals life will serve us might at times –most of the time - taste of nothing. It is up to us to spice them up.
Someone once said, that in life we never get what we want the most of all. Well, perhaps that is true. I however firmly believe that we hold the power to spice up what ever we get.
Posted by Zuzana at Wednesday, December 10, 2008

I do love the way you think. And I needed to read that today. Thank you... xo

I once remembered reading somewhere that life is not what happened to you. It is what you make it out to be i.e. you plan your life( though, God decides) If we are fortunate we may be given a second chance which we should be very grateful and not mess again. Now is the best time ever to 'spice' our life. I am amazed how you dared leaving home with $300 in your pocket.Incredible. Your story here is very touching. We all have our setbacks and as usual life goes on. I appreciate you sharing us a personal story.

oh i love stories:) It's fun to find random things that jog your memory...

You have the best stories, and the best lessons too! I love your little salt and pepper shakers - they're so cute!

Yes, I believe in this too. Sometimes we forget about our "spice." But it is always there, in our memories or in a cabinet, waiting for us to take the chance to experience something new.

I love this story. You are very brave. I remember backpacking Europe for 2&1/2 weeks and nearly crying when my plane landed in London because I felt so lost, and I wasn't MOVING there.

Diane, I hope you feel better today. And right back at you.;))

Mahmud, what a beautiful comment. Those are very wise words and I could not agree with you more. And yes, it was a bit daring to leave home with only two small suitcases and just a pocket change, but I think I was very young and a great idealist, which helped. And then I was also very lucky to meet kind and generous people.

Hello Culture Creators and thank you for stopping by; yes, it is amazing how small objects can tie us to a place in space and time.

Mel, your stories are even better, I always enjoy reading anything you have to say. And I agree, I think the piggies are adorable.;)

Michelle, you got it, we have all the spices, we just have to use them. Some of us forget that at times, me included.;)

Holly, I am not that brave, I am scared just like everyone else. But I think when I was young, I was more ignorant and appeared a bit more brave.;) I would not do this today, to be honest. And additionally, I found -and to this day I find- great inspiration in my parents who were never afraid of changes or challenges.
And than you for your compliment, it means a lot to me.;))

You're a gutsy one.. no doubt about that. And clever and oh so insightful. You never fail to inspire. Thanks for that.

And I love your little porcelain porcine. :)

Hilary, I always enjoy when you stop by, your comments mean a lot to me.
I still do not think I am gutsy though, probably just very naive at times.;) And lucky!
I love the fact that someone like you can find inspiration in what I write, thank you so much, it warms my heart.;)

Love your story and I can remember leaving home when I was 21 to move to the middle of the country and crying too!! But i left with a boyfriend and we were going to have some help from his brother...you were young, naive and brave. But youth is when you challenge yourself...when we get older we get set in our ways...or maybe just too much responsibility abounds!

Love the pigges...Honor the Swine!!

Dear Lulda, I could not agree with you more; it is a shame that we get so comfortable with age.
Thank yo so much for stopping by and for leaving such a wonderful comment.;)

I don't think I've ever enjoyed reading a blog entry as much as this one. What a wonderful read!. Thank you!

Tom, thank you for your kind comment and such flattering words. Sometimes we simply find something in someones writing that speaks to us; I am happy you found that in this post.:)