"The Day Before The Dipping Day". 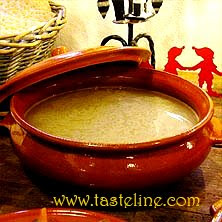 When I was growing up in Sweden, the last day before Christmas Eve had a special and somewhat strange name. The 23d of December was called "Dan Före Dopparedan". Dopparedan is a shortage for Dopparedagen, which in translation means "Dipping Day". When the two other words; "Dan Före" are added, the meaning becomes "The Day Before The Dipping Day". Ok, so what is this dipping business all about? "Dipping" in this case is referring to a meal called "dopp i grytan" (transl: dip in the cooking pot), which was served on the 24th of December, on the evening of Christmas Eve, in the old times in Sweden. The left over broth from the cooking of the Christmas ham or sausages was reduced and spiced up, transferred to a big bowl and placed in the middle of the table. It was then served with soft bread, which was dipped into the spicy soup in the bowl. This is an old Swedish tradition, but I do not think it is very common to serve this meal anymore. However, the name is still widely used, especially describing the 23d of December in Sweden.
In many Scandinavian countries today is also called "Little Christmas Eve". Often a private Christmas is celebrated on this day by couples, with or without children, that are to spend Christmas Eve with their parents, grandparents of others members of their close or extended family.
Merry Little Christmas Eve to everyone in Scandinavia.
Posted by Zuzana at Tuesday, December 23, 2008

I do like to dip. Is double dipping permitted? ;)

You have so many rich traditions to share.. what a wonderful collection of memories.

And to Diane; No double-dipping it's just like putting your whole mouth in the bowl! Gotta love Seinfeld. :)

I would never had thought to use the broth from ham and turkey to make a dipping soup. You have more traditions than I can count. My head is spinning. ;-)

I ended up writing about "lillejulaften" in Norway, too, and linking to your post. I didn't know about the Swedish dipping tradition. Sounds tasty.

So many wonderful posts that I just enjoyed catching up on. I love your blog because it is like having a favorite book or magazine, but it upates daily. Who could ask for more. I have really enjoyed all of your recent posts. They have given me an extra fill of holiday spirit. This one is especially zesty ;). I have to agree with everybody else,...you are the tradition guru. I am learning so much from you!

Oh, and I really like your new profile picture, so chic!!

Thankyou for sharing this information, I love reading about other nations' traditions! This meal sounds delicious!

Diane, I love dipping too.;) The best snacks are the ones that comes with a dip.;)) And the double dipping I am sure cannot be avoided if you place the bowl on a table among a large family.;))

Hilary, I have lived in so many countries and am bound to carry traditions from all of them with me, as I truly enjoyed practicing them. They always made me feel, like I -just for a moment - did belongs somewhere.;))

Michelle, I agree, it is somehow interestingly strange meal.;) I am guessing it was served in the past, when food was scarce, and people tried not to dispose of anything that could be eaten.;)))

Keera, yes it is indeed amusing how the culinary traditions differ a bit between the Scandinavian countries. Hope you will have a wonderful Christmas!;))

Holly, what a wonderful comment, I love the thought of my blog being a magazine.;) I am happy to provide you with the last extra fill of holiday spirit; I am sure your home must be looking all decorated and lovely, as you are so talented. I have to say I am learning much from you as well.;))
Thank you for the comment on the picture, I though there was a need for a more recent one, where I smile, as than is what I always do.;)
Btw, a mail has been sent to your account; hope it will arrive.
Have a wonderful Christmas.;)

She is dressing up, thank you for stopping by and I am happy you enjoyed this post. Have a wonderful Christmas!;))

Mel, I hope your Christmas Eve will be wonderful as well!!!;)) Enjoy your time with those lovely girls of yours.;)))

Thank you Hazel, I love the new term.;)) I might just use it myself. Have a joyful Christmas.;))

Hello and Happy Holidays!
I very much enjoyed this story and I think this is one of those lovely traditions that I may offer to add to our family group monthly event. I may not even wait until next year!

Your blog is lovely. I am new here and I enjoyed my visit. If you are out and about please stop by and say hello
Linda

Hello Linda and welcome; please do feel free to add this to your traditions, that sounds lovely.
Hope you had a wonderful Christmas.;)