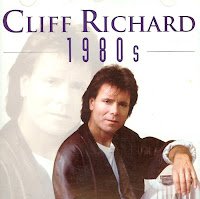 Sir Cliff Richard. Even the name sounds iconic. Whether one likes his music or not, one fact remains; he is one of the true remaining superstars, talented and charismatic, having been active on the scene for half a century and managed to supply us with first class entertainment, looking forever young while doing so.

My awareness of Cliff Richard occurred in 1984, as he was climbing the charts with the catchy compilation; "Baby You're Dynamite". I was at this point somewhat familiar with his music, mostly because his old hits from the 60's and 70's, such as "Congratulations" and "Summer Holiday", were translated into Czech and often played on the radio when I was a child.
There are numerous beautiful songs that I could share with you here, all made by this infinitely talented performer, such as "Dreaming" and "We Don't Talk Anymore", two of my absolute favorites.

However I opted for a somewhat overlooked gem, featured on the B side of the "Baby You're Dynamite" single. Not many are familiar with this beautifully composed and eloquently performed piece. Entitled "Ocean Deep", it is delicately sentimental and poetic.

The lyrics are full of melancholic longing and the harmony seems to make this song light as air, yet deep as the blue waters of the ocean...
It is simply beautiful art - music at it's very best.

A great song by Cliff. Do you know, here in the UK his songs were banned from Radio 1 by certain DJ's because they were deemed too 'middle of the road'. Unbelievable! We still love him though!

Just caught up with your previous two posts on water and make-up. Fascinating reading as always Zuzana and a tad scary - I didn't realise I was consuming my lipstick!:)

Have a lovely weekend. Jeanne x

Thanks for Cliff, he has music for always. In a few minutes I leave for the airport. But first I want to wish you a lovely weekend with lots of fun. I'll see you monday.

Oh my what a flashback. I had almost forgotten it. Thank you Zuzana for this one!

Oh Sir Cliff...he was my girlhood idol for so many years, my older brother took me to see him three times (bless him). These days he doesn't get much air time on the radio here in the UK but he is still much loved. Thanks for the memories!

nice. i enjoyed that...i dont remember him, so this is a new memoriy for me...

Ah! I adore Cliff Richard's music esp 'Bachelor Boy,' 'Congratulations,' 'Christmas time, mistletoe and wine' . . . The list can go on. I grew up listening to his music. We share a special connection with him as
he was born in India. Englebert Humperdinck was also born in India, Madras to be specific.

Thanks for that walk down memory lane Zuzana.

i grew up on a musical diet of cliff richard, jim reeves, abba and the rolling stones. my parents used to play them all the time and it makes me nostalgic when i hear those tunes even now.

He was very popular with the girls....
We listened to him a lot. there was a sentimental attachment as he was born in India

Zuzana,
You've stumped me :) In the 1980s I was heavey into raising two kids basically on my own and missed out on a lot of artists. I must bring Cliff up on youtube and check him out. The songs titles sound great.
Thanks for sharing. :) The Bach

gosh! you just made me cry with these song.

Well i have a friend who passed away 7 years ago and this is his fave song. He used to play this on his guitar and we sing this all the time. I miss him.

I also adore your red lipstick post...and your eyes are so gorgeous!

Have a great weekend dearest Zuzana, much love: Evi

Was very beautiful to listen. Thank You!

Have a wonderful weekend, Zuzana.

Apparently I am the only one who has never heard of Sir Cliff Richard! He does have a nice voice though.

Zuzana: A very nice performance by a legend! Rick Springfield covered songs from the 80's he wished that he had written in a CD called "The Day After Yesterday". xo,
Michael

Zuzanna,
I remember Cliff Richard and I liked him much more than the Beatles (that opinion was not shared by my friends in high school!).

have a great weekend!

Jeanne, Elizabeth, Roger, Joanne, Brian, Susan, Betsy, Kamana, Sumandebray, The Bach, Denise, Evi, Kata, Margie, sprinkles, Michael, Jeannette ad Doreen – I am delighted to know that you too recall and enjoy the music of this great artist and that this compilation brought back sentimental memories.
Sorry for the tears Denise…

Thank you as always for your time and kind words.

I had a hectic few days Zuzana so I am only catching up now.
I never actually heard this song before but it's a typically nice ballad by Cliff (aka The Peter Pan of pop). My own favourite Cliff songs are "Sing A Song of Freedom" and "The Day I Met Marie".
I was in a Pub Quiz once and was really pleased to be able to answer a pop question - Where was Cliff Richard born and what is his real name? India and Harry Webb!

Blogaire, thank you so much for this great comment, I guess pub quizzes are a big hit in Irish pubs.;)
xo