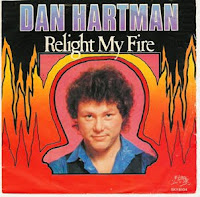 I was a bit too young to fully enjoy the hits of the 70's disco era, but I nevertheless remember them all. My parents, whose love for music I inherited, also loved to dance. Although they remember fondly and appreciate greatly the charm of a "live" orchestra from the 60's, they did swing on the dance floor in the decade that followed to all the undying disco dance melodies.

I recall Dan Hartman's hits mainly from the later part of the 80's, such as "I can Dream About You", still the below is one of my absolutely favorite dance compilations. "Relight My Fire" was released in 1979 and topped the U.S. dance-music charts for six weeks. Loleatta Holloway is one of the featured vocalists on the record. It was also a major hit almost 15 years later when covered by the British boy-band "Take That", featuring Lulu in 1993.

You relighted my fire. This was a fun one on memory lane.

The weather report: The sun is showing herself so now and again.

fun song. i was born in the 70s so most of my music is late 70s and 80s. did not remember this one, but fun for a friday. definitely. have a great weekend.

Ah Zuzana, this is funny. I always hated disco, I've hated it with passion... and still do. Nothing to be done... My love of music, which is great indeed, does not include disco. It has indeed erected fences and dams against it... :-)

Would you believe, the lovely Hélène is playing Rachmaninoff's Preludes right now, horrendously difficult they are... one of the few times since she could hear again. Complex music... extraordinary. I can hardly work.

oh i can definitely dance to this.

this is sooo cool.

Loved this post!
Thank you, Zuzana!
Now I want to dance!
I love to dance!

Have a great weekend!
Enjoy every moment!

So silly and fun...Thanks for this Zuzanna :)

Loved it. I absolutely love to dance even if its only in my heart!!!

What a fun song! You can't sit still when listening to this : )

Disco music was fantastic to get you moving to the beat. Hearing it still makes me want to dance.

I don't remember this particular song. I guess I'm more of a 60s girl, since I definitely remember another song with a similar title, Light My Fire by the Doors.

Hey Protege,
Hope u danced well. So sorry for missing in the blog world for some time. Was out on a big trip, not a vacation though. Would update that soon.. See ya...

oh, sounds of yesteryear! thank you so much! and as you know from my post of monday, how i love dancing! doesn't matter which or what kind or where - and my one wish for us all:

Most of the songs you post I've never heard of and this one is no exception. I listened to it and recalled what little I could of the timeframe when this song would have been popular. I was still fairly young and didn't listen to music much back then. Mostly what I remember from that time is what I've seen on infomercials trying to sell music from that decade.

I see someone is fighting the “January Blahs” by doing a little disco.
-
“Go girl, go.”
-
Let’s beat the winter doldrums with the endorphins you get from dancing. Have a great weekend.

Sometimes I feel in old days was much better music to dance for,right?

I am use to listen old songs, I was record them from MTV before....hehe it's really funny to look back the videos

Have an amazing weekend my friend!

Sorry Zuzana,(another song!) my Internet is down for the past few days. (I am in an Internet shop full of crazy people!)Hopefully I will be back online tomorrow, miss your blog!

Elizabeth, Brian, Roger, Denise, Margie, Laura, Susan, LadyCat, Stevie, Mitr, Gypsywoman, Nessa, sprinkles, Scribe816, Kata and Blogaire – glad you enjoyed this dance piece, whether you are familiar with it or now. And I hope you had a lovely weekend, dancing or not.;)

I appreciate your kind words and visits.