With todays celebration of Epiphany (from Koine Greek ἐπιφάνεια, meaning "appearance", "manifestation"), the Christmas is officially concluding. This day commemorates the visitation of the Biblical Magi to the child Jesus.
In my culture, the 6th of January is called The day of the Three Kings and I recall that it meant the absolute end to the joyful Holiday time and a return to the routines of daily life.

All of us are familiar with the story of The Three Magi (Caspar, Melchior and Balthasar), carrying gifts (gold, frankincense, and myrrh) and following the Bethlehem Star, which finally lead The Kings to the infant.
I am intrigued by this tale. The spiritual me rejoices in this event; the scientific me likes to look back in history, searching for facts that would depict it in the heavens, those two thousand years ago.

Was there really a star, or a glowing, moving object in the skies around the birth of Christ? 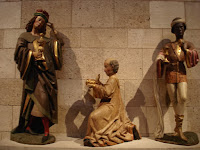 I am not the only one asking this question. For centuries, the answers have been proposed by theologians, historians, astronomers and laymen.
The primary reference for the Star of Bethlehem is in the Gospel of Matthew, which was probably written around 80 A.D or slightly later. In modern times, astronomers have offered various explanations for the star. A nova, a planet, a comet, an occultation, and a conjunction have all been suggested.
In 1614, German astronomer Johannes Kepler determined that a series of three conjunctions of the planets Jupiter and Saturn occurred in the year 7 B.C; the nights sky of that event can be seen here.
Halley's Comet was visible in 12 B.C and another object, possibly a comet or nova, was seen by Chinese and Korean stargazers in about 5 B.C. A recent hypothesis states that the star of Bethlehem was a supernova or hypernova occurring in the nearby Andromeda Galaxy.

Of course, to those of faith, the Star Of Bethlehem is a magical event, that needs no explanation nor have to be supported by any facts. The magi seem to have been the only ones who saw the star— this further supports the notion that the star of Bethlehem was a supernatural manifestation from God rather than a common star, which would have been visible to all.

After searching for the facts myself, I eventually realized that facts matter very little in this subject. What matters is what we believe. Sometimes a belief is the ultimate proof.
After all; "There where science ends, faith begins."
Posted by Zuzana at Wednesday, January 06, 2010

I had completely forgotten it was Epithany today. Interesting post Zuzana and the subject of the bright star on that fateful night has always intrigued me. It's a lovely story whether based in science or faith and no doubt will continue to divide opinion...

I'm a visitor via Queenmothermamaw and find you offer wonderful insights and reflections! Thank you for this. Cathy

My dear you are truly a Sister of Faith. You are so right the facts don't matter in the story as far as the proving of the events of the birth of Jesus and his life. His reason for being is all true to those who believe and live out the truths.
QMM

Hey Zuzana! I wrote about Epiphany as well at the blog, which also signifies the end of the Holiday Season in Guatemala! What a coincidence! :-)
I have watched plenty of documentaries about Christianity on TV. I love those!, as they bring a different perspective. Religious-wise, it is all a matter of faith, and in a way, to believe blindingly. But it is also amazing to learn the possible scientific facts, as after all, many Biblical happenings are the result of natural phenomena, commonly known today, but certainly surprising and mysterious back then. I'm always fascinated by documentaries, especially those that teach new theories and possibilities.
Have a great Epiphany my friend!
*hugs*

What a wonderful post! =) I like the very last sentence where you said, "There where science ends, faith begins." Having faith in all things is a beautiful thing. =)

faith does not depend on facts, does it...nice. i just learned recently about the epiphany....really cool.

If you have faith then do not question.I believe that faith is necessary to help one accept things which are not in our control and keep one going.
also have seen that as we grow up and grow old we learn to extract the gist of all the mythological stories.... the wise men (and women) of olden days used to garnish important messages with nice stories .. that is how I look at :)

Have a great Epiphany!

And...
- You came into the world on Tatra Mountains (Slovakia),

- You have a Czech father

- You have a Slovak mother.

- You grew up in Sweden and

- You lived and worked almost 10 years in USA (North Carolina)

- Today, you live in Denmark.

I envy your cosmopolitical past

Love that today is the Epiphany...the 6th night...

Have a lovely day and I'll be back to visit soon, dear one.

The quote in the last line sums it all: "Where science ends, faith begins" and certain things cannot be just proven, they ought to be believed. Something like the immaculate conception.

Joy and faith always to you dear Zuzana.

Was there really a star, or a glowing, moving object in the skies around the birth of Christ? In many myths of Babylonia and Assyria and of course in the Indian Gilgamesh of Hercules you will find easily very similar stories about three Magi, stars e.t.c. A lot of people confuse religion with faith, the unknown 'ruler' like the do with history and mythology!!

Lovely post, Zuzana. I enjoy these discussions. How does man or woman access that which is beyond his or her skin? How does the poem analyze the poet?

Aliens coming for a visit? ;O) Lovely post, Zuzana. I hope you are finding the start of the new year a good one and the snow isn't disrupting too much? It is here; we are not able to cope with snow and ice....or rain...or leaves for that matter. Sigh.

This was a very thoughtfully written post. We Baptist/Independents don't celebrate Epiphany, but I think we should.

Zuzana,
oh my goodness. What a divine post you have here. I agree; your last statement says it all. I hope your holiday season has been filled with warmth and happiness that will extend into the new year that has come upon us. Thanks again for sharing the traditions of those beautiful countries to the North! The Bach

This is one of the many, many, many reasons I love to stop by. I learn so much here! I have never heard of the celebration of Epiphany before, thank you for sharing the information.

I grew up believing in God but my family never attended church so I'm not very smart in these matters. I have lots of questions and not many answers.

After all; "There where science ends, faith begins." -- so true!

What a beautiful story dear Zuzana...and I love your final statement :-) I'm so glad your are back, you was truly missed.

Wishing you a wonderful New Year and I hope our relationship will get even stronger in 2010 :-)

Ps: I will email you in this weekend, I had such a great time in Norway...

What a wonderful and lovely post!!! Truly enjoyed this!!! Your blog is absolutely lovely!!! You have such an artistic flair!!! I came by via QMM...Congratulations on the award!! Nice to meet you...I will visit again, I'm sure!! Cheers! Janine XO

Beautiful! I do wish we celebrated the 12 days of Christmas here...I've only this season learned so much about that tradition. ..really lovely.

On Christmas Eve my daughter was having trouble going to sleep in anticipation of opening gifts the next day. I gently tried to bring her back to what Christmas is FOR, and told her as best I could what I know about the scientific and religious explanations for Christmas and the star.

It got complicated! Virgin birth! The star! I realized how little I do know, and so I appreciate what you shared here.

Jeanne, Cathy, Mel, QMM, Claudia, Shelly, Brian, Sumandebray, Ionn, Kary, Susan, Phillip, Richard, Helen, Stevie, The Bach, sprinkles, Evi, Janine (welcome!), Betsy, Felipe and sallymandy – thank you all dearly for appreciating this somewhat contemplative post and the sentiments about our traditions and beliefs.
I always like to challenge myself and my thinking as well as trying to keep an open mind when it comes to the issues of the mind and the soul.

As always, I appreciate incredibly your time and I simply love to read all your thoughts and comments.