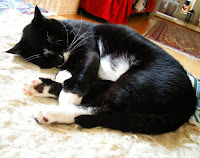 "I wish I could enter hibernation," is a very popular expression of mine during the winter months. The wall of bitterly cold air that hits my face as soon as I step outside and the endless dark oppressive days; wouldn't it be much better to just sleep through these like many animals do? I am telling you, they have figured it out.

What exactly is Hibernation? I am sure most of us know that it signifies a winter sleep that many mammals and other species of life enter during the coldest part of the year. But this deep sleep is a rather complicated process.
Hibernation essentially means a depression in the metabolic rate in animals. The biological processes in their body are slowed down, which means all the organs work slower. The body temperature is lowered, the breathing is slower and the heart rate as well. Usually the animals survive by using their body fat. The initiation of this process is apparently not just triggered by the environment, meaning it gets darker and colder, but the animals that can enter winter sleep have a particular compound in their body called Hibernation induction trigger.

Animals that hibernate include bats, some species of ground squirrels and other rodents, mouse lemurs, the European Hedgehog and other insectivores, monotremes and marsupials. Even some rattlesnakes, such as the Western Diamondback, are known to hibernate in caves every winter. Insects enter another state of dormancy called Diapause and some birds, which are not migrating birds utilize Torpor (or a temporary hibernation). It is commonly believed that bears hibernate as well, however that is not entirely correct. Bears do enter a certain degree of hibernation, however their body temperature drops only a few degrees and they can easily wake up from this so called "denning". Some hibernating animals, such as ground squirrels can lower their temperature all the way down to the freezing point, or similar to their environment. They appear cold to the touch, motionless and can not be woken; thus often when found in this state can be mistakenly assumed dead.

Interestingly, there are many research projects investigating currently a potential hibernation induced in humans. The benefits of mankind in being able to enter this state of dormancy would be beneficial, mainly when dealing with life threatening diseases or in the subject of space exploration, when large distances have to be covered.

However, I can think of many more exciting reasons to when winter sleep would appeal to me, such as surviving the long Scandinavian winter; saving money in doing so and even loosing some extra body fat as well.
Now, wouldn't that be something!

I have often thought longingly of hibernation too. Usually I just sleep in a LONG time on those cold, dreary days I am able to...and I often wonder if my strong desire for more than usual sleep is because of the time of year.Interesting post. Now I know I really don't ever want to stumble upon the den of a hibernating bear either!

Well, that's another gem Protege! I marvel at how you can come up with such diverse subjects as hibernation, Cliff Richard, water and lipstick - all in the space of a week.
I think I would also be an ideal candidate for hibernation. I wonder if NASA are doing any research in this area with a view to sending a mission to Mars? I could be their guinea pig. Hmmm ... do guinea pigs hibernate?

what if they forgot to wake me up!?! here is the thought that scares me, our relationships would suffer. disappearing for months at a time at different intervals...scares me.

Yeah.. what Brian said. And how would we cope without blogging? ;)

Hi Zuzana
What a great post! I guess I could try the hibernation diet.
Dan
-x-

I love that...sleep all winter and wake up skinnier just in time for spring! ha!

That was very informative. I have thought that myself many times. But I don't really want to hibernate might miss something. I would love to wake up slimmer one day. I can't imagine how your weather is where you live. I have never been there. I love hearing from folks around the world. Blessings
QMM

I don't know about "Torpor", it's more "Stupor" in my case LOL

Yes, I too wish I could hibernate during the cold months! By the time the sun sets I am so tired, anyways. It's hard to maintain a good level of energy when there is no sun to perk up your spirits.

Zuzana,
Sounds good to me, where do I sign up? I would however need to talk my Teddy Bear into joining me.
Kat

So glad you don't hibernate through the winter as I would miss all your amazing posts!

Another gem!
Thank you, Zuzana!

Oh, I know it's so very cold there!
Stay warm!

Loved the pictures and video!

Don't ever think of hibernating. Where do we go for stimulating posts then?

I always love coming by here and seeing what you have written.
Yes I so agree with taking the winter months off and just hibernating. These months seem to depress a lot of people so maybe thats the solution.
I have to come back later today and catch up on your earlier post.
Take care
Maggie

I would certainly check this about the black bear, at least with the black bear that can be found here in Québec and northern Québec.

Sure, they cannot go lower than 0° - the water inside their cell would crystallise and expand and kill the animal (and any man for that matter). But they do enter a state of hyperthermia (don't know the temp) and their heartbeat falls down to 5-6, a state where they cannot wake and be up to par in a matter of seconds, maybe not minutes.

I've never seen, or heard of, any sign of a bear or bear activity during winter in the forests around here. And believe me, those forests are their home... and bears are numerous.

Oh how I long for hibernation. That photo was so dang cute. We found a wasp in our house yesterday! For one day and one day only, the temperature heated up as the sun shone and this one queen by the looks of it's size had woken from it's sleepy state, staggering around like a drunken man. We scooped it up and sent it outside; I do hope it finds another home though...I wouldn't kill it of course, but I'm not fond of them plus I'm allergic to their stings.

Yes, I too would like to hibernate. It would be perfect - I'm miss all the cold weather and wake up skinnier just in time for spring!

I have often wondered if squirrels hibernate. I see them on warm days running up and down the oak tree on my back deck. Thanks for the facts about what causes hibernation.

I like to hibernate on the weekends. Maybe not by sleeping, but definitely by spending the day in my pjs.

Sometimes I feel for sleeping looooooong....like this time of the tear...I don't like January.

Laying dormant, slower breathing and heart rate, and storing body fat all have to do with a metabolic change associated with colder weather and the shorter days.
Interesting, I just thought I was getting old, fat and lazy.

It is always a pleasure to wander over your blog and to read it. A quiet moment before going sleeping
xoxo
Christiane

I'm all for sleeping and loosing weight in the winter, instead of gaining it!

ME TOO! It would be nice just to sleep through the very cold days. =) My husband would love to hibernate. He loves his sleep.

I hope your having a good week.

That was a very interesting post.
I personally would not mind hibernating but I would only able to save if someone keeps paying me while I am in that deep slumber!
By the way will the average life span of people be doubled if we do that

KathyB, Blogaire, Brian, Hilary, Dan, Betsy, QMM, Kath, Jacki, Kat_RN, Margie, Susan, Maggie, Roger, Helen, sprinkles, Stevie, Kata, Scribe816, Christiane, Claudia, Debbie, Shelly and Sumandebray – thank you all for sharing with me your opinion about hibernation.;) I loved to read the variety of views and thoroughly enjoyed all your comments.;)

Thank you all so much for taking the time to stop by.

I'm with Batcat...time to hibernate!

If you are encountering consistent problems in falling asleep at night and are unable to cure your insomnia in spite of putting in your best efforts, you should soon pay a visit to the doctor. After evaluating you as a victim of the sleep disorder insomnia, the physician may prescribe sleep aid pills such as Ambien, Lunesta et al for you but to extract maximum benefits from the sleep aid pill, it is to be taken as per the instructions of the doctor. However, before you move ahead to treat your insomnia with Ambien, it would be considerably beneficial for you to obtain first hand information on Ambien from the website http://www.sleep-aid-pills.com/.

At sleeping time every person or animals looks so innocent. You caught nice shots! So cute pictures!! Thanks.