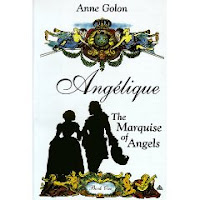 When I was a child, growing up in the former East Bloc, the Czech and Slovak cinematography was the prevailing one in both cinemas and television. However, the broadcasting did embrace the occasional French or Italian movies.
One of the most romantic and extremely sensual series included five films based on thirteen books written by the French novelist duo Anne and Serge Golon.

These depicted the adventures of Angélique de Sance de Monteloup and the affection between her and the gallant, intelligent and charming Joffrey Comte de Peyrac. A love story of the most extreme romantic kind, the movies are a continuous display of passion and chivalry, one that is long gone from the cinematography of today and would most likely be viewed as ridiculous, naïve and perhaps too flamboyant to be taken seriously as well. Which is a shame.

The plot of the first book (and movie) in brief is one of the tragic kind, as any true love story really is.
Angélique, child of an impoverished country nobleman, finds herself betrothed to the rich count, Joffrey de Peyrac, 12 years her senior. He is lame, scarred and reputed to be a wizard. Angélique reluctantly agrees to the match but in time discovers the talents and virtues of her remarkable husband: scientist, musician, philosopher; and to her surprise falls passionately in love with him.
Tragically, Joffrey's unusual way of life causes his arrest and charged with sorcery he is to be burned at the stake. Angélique, despite trying to save Joffrey, alone and desperate, plunges into the darkness of the Paris underworld...

I was way to young to watch or understand the movies and I never read the books. But I remember they were very popular, and when the series were re-send on television in the seventies, I used to watch them with my parents. To this day the images stayed with me in the dusty corners of my memory, somewhat forgotten, until they recently resurfaced, when brought back by a sheer coincidence. I love this kind of serendipity and I am always left with a sense of wonder when it occurs. Often left pondering the fact of how many beautiful moments of the past we carry with us, those often forgotten, stored away in the attic of our mind. Stumbling upon them it is like finding a long lost friend or discovering a treasure, making us aware of the relativity of time.

Below a series of scenes from the first movie accompanied by the famous soundtrack. It was made in 1964, entitled Angélique, Marquise des Anges (Angélique, the Marquise of the Angels), featuring the beautiful Michele Mercier and handsome Robert Hossein.
They just do not portray romance this way anymore...

Interesting, I have not seen it. But it is true earlier movies on this subject are better than todays.

The clip is visually stunning! I love the bedroom and old house.
It is curious how things come back to us at a certain time. Everything is connected and there is always a reason for everything. Thanks for sharing this...I had never heard of the series.

This clip is so tender and indeed emanates the aura of love. This is so beautiful. Thank you!! Cathy

am very intrigued. I hope to get the books first.

When I entered the world of pen palling, I began discovering new movie and book titles. In Guatemala, when growing up, one was introduced basically to Latin and Guatemalan literature only, and was little encouraged to keep a life of book reading. This piece you are sharing with us today is completely new to me, and though clearly a 60's production, I'm most intrigued by the story. I wonder if I can get the books somehow, either in English or Spanish? I'm sure it would be good and entertaining reading! A 2010 mission :-)
In the movie version, he does not look 12 years her senior, does he?
have a great day my friend!
*hugs*

Wow!!! Just your description of the books/movies touches my heartstrings...can't imagine how I would respond to the film in its entirety!!! No wonder it made such an impression!!! Thank you for your extremely kind words on my blog!!! I'd like to follow you, if you don't mind? I think I will be so inspired by you!!!! ~Janine XO

I love to read your posts, Zuzana, whatever they're about. I always find them fascinating and full of life. I've never heard of these stories either. Thank you for sharing them!

(((SIGH)))
Oh my...how deeply romantic and the music is wonderful...the clip ends with the tragic music...a bit of a cliff hanger.
I would love to see these movies.

wonderful wonderful post! thank you so much for reminding us of real romance - the scenes remind me of "the age of innocence" - michelle pfeiffer and daniel day-lewis - or another great romantic film is the version of dracula starring frank langella - where love is portrayed by just a look or a subtle movement or a slight touch - beautiful post, lady! thanks so much for sharing!

Angélique, oh that is a long time ago. I have no idea how many hours I watched her adventures. I always felt she was so brave. Maybe I should watch it again, if it is on youtube. Thanks for reminding me, so nice.

I think most women are suckers for a syrupy romance. I know I am. We are all surprisingly alike the world over.

Like you, I find the intricacies of the human mind fascinating. There is so much we don't know.

You know, I hadn't heard about the celebration of Epiphany until yesterday when I read your blog. That evening I went to my mom's house and commented on how many people still had their Christmas lights up and turned on. She said it was because of the Epiphany. Then I read something in the newspaper about it while I was there. So thank you for explaining it!

I love your blog, and have added it on mine.
What you are teeling us is so interesting. Thank

Do you make lists about the stuff you want to write about? Or does it just come to you, like, in the middle of the night? :) I always learn stuff when I come here. You're better than school ;) XO

Rajesh, LadyCat, Cathy, Brian, Denise, Claudia, Janine, sallymandy, Jill, GYPSYWOMAN, Elizabeth, Stevie, sprinkles, Christine (welcome!), Diane and jeannette – thank you all so much for stopping by and for sharing my flair for romance.;) It never dies, right?

Movies have significant roles to play in our life and it comes to us at the right time. I have not heard or seen the series but it left a nostalgic trail within me. These old series are not just a 'series' but memories, lost feelings, hopes, joys and many other things combined.

Thanks for this dear Zuzana.

You made me wander through the pages of memory and romance.

Well the movie looks much ahead of time. Looking at the clip I could not believe that it was shot in 1964. The Indians movies that were made in that era looks completely different.
Good feeling when old memories makes a comeback.

I was blog hopping and found your blog and this posting. I have all 13 of these Angelique books and have read all of them. I live in the USA and never saw (of knew of) these movies based upon the book series. The books are wonderful - in fact, I have read them more than once. Now I will have to read them again. Thanks for the posting.

Oh I read those books when I was around 12 /13 I think and loved them. You remind me how much I adored historical fiction. I must order them from the library

Susan, Sumandebray, Sandy (welcome!) and Ambermoggie (welcome!) - so glad you appreciate the romance of times gone - and that some of you even recognize these beautiful works of art.;)
So glad to see you stop by and thank you for expressing your own opinions and sharing them with me,
xo
Zuzana