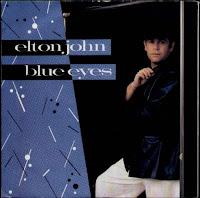 The first time I heard of Elton John (now Sir) was in 1983 when he had a major hit with "I Want To Kiss The Bride". I had no idea who Elton was, nor did I know then that he has been an active musician starting two decades prior.

Since then, his numerous compilations has been topping the charts, but none has really manged to capture my heart the way that "Blue Eyes" has. From the 1982 album "Jump up!", the song went to #1 on the adult contemporary chart, becoming John's sixth chart-topper on this list.

I am not sure why I love this piece so much; perhaps as its lyrics somehow always manged to speak to me in one way or another.
Or perhaps because I always imagined this song being sang to me...

Very pretty song...I like it. That man can sing can't he? I always like Van Morrison's "Brown Eyed Girl" but then I have brown eyes so that's probably why.

Love this song Zuzana...your song picks are my favorite post of yours (and your garden pictures). I ADORE your new picture on the sidebar...your look fabulous!

Lovely Song Zuzana.
The one & only time I saw Elton was in 1970 at a Festival in Yorkshire.
I must say,like you, i like some songs of his better than others.Although, when he's on top form, He is good.
Have A Fine Weekend.
T.

you know he was singing it just for you...smiles. really a beautiful song...wonder what that says about you. have a marvelous weekend zuzanna!

I did laugh when I thought about Elton's "I wanna kiss the bride". My best freind at the time of my wedding, was a man. He threatened to stand up at the point where the Vicar asks if anyone objects. Luckily he didn't and went on to find a lovely lady to marry the following year!

I agree with Brian, maybe he was singing it just for you. Who knows???

I have older brothers and sisters so I don't remember not knowing who Sir Elton was. Yes he has a way with words and music, I am so glad he gets the recognition he desearves. Good memories. Thanks,
Have a nice weekend,
Kat

Hi Zuzana,
I've never been a great fan of EJ, but this song is my absolute favorite!
Thanks for the reminder to put it on my ipod! Such a pretty song (and I have blue eyes, too)
Sherry

I have love Elton ever since I first heard him, many years ago. I love this one too. It think it is for you. blessings
QMM

Wouldn't I love to have a song dedicated to me!! But there isn't a Claudia song, or a curly hair song, is there? There are Maria songs (my second name) but I don't go by it, so, which song would I like to be sung to?...interesting question.
have a great Friday Zuzana!, and a lovely weekend ahead.
*hugs*

Yes I can just see Elton, microphone in hand, strolling down from the stage to her table and serenading Zuzana ... (hope that the Irishman will not be jealous!)
I think everybody might have an Elton John favourite and mine is "Sacrifice" - brings back many happy memories.
Incidentally Elton wrote the music and Bernie Taupin wrote the words of all the songs.

I didn't think I'd heard of this song before but then I played it and I have. Guess I just didn't know the name of it. Haven't heard this one in years!

I nominated you
please read the post via the link,
help nominate some bloggers you believe that they are excellent on

art or painting,
humor,
or creative writing...
Good Luck!
I appreciate your input.

Everyone will receive some awards tomorrow...
12 hours deadline!

My oldest son has brown hair and blue eyes and I always thought that was a really pretty combination. Now his wife does too. So I can't wait to see what our granddaughter looks like!